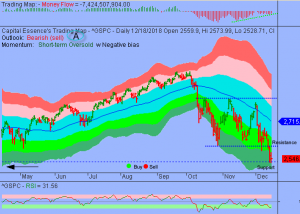 We’ve noted in the previous Market Outlook that: “divergence starts showing up in the Money Flow measure as the S&P tested formidable supports.  Typically, this is a sign that the selloff may be mature and stocks are, therefore, at risk to a short-term rebound.  Near-term, there is a high probability of rapid rallies and retreats between 2530 and 2600.  Short-term traders can play the range but the market is volatile and tight stops are advisable.”  As anticipated, the benchmark index was up as much as 1.1 percent in early Tuesday session but the rally did not hold up and once again, stock market succumbed to an inclination to sell into strength that saw the S&P retested the early 2018 low. Like Monday, though, there was some late buying interest on the re-test and the S& finished just above flatline at 2,546.16 as result.  The Dow Jones Industrial Average rose 0.4 percent and the Nasdaq Composite added 0.5 percent.  The CBOE Volatility Index (VIX), widely considered the best gauge of fear in the market, jumped more than 4 percent to 25.58.

Oil prices continued to get clobbered amid ongoing concerns over excess supply and slowing economic growth. WTI crude dropped 7.2 percent to $46.57/bbl, closing at its lowest level since September 2017. The oil-sensitive Energy Select Sector SPDR ETF (XLE) fell 2.36 percent on the day and is down more than 17 percent YTD, underperformed the S&P by a wide margin.  Now the question is whether recent selloff is a beginning of an end or there’re more pains ahead?  Below is an update look at a trade in XLE. 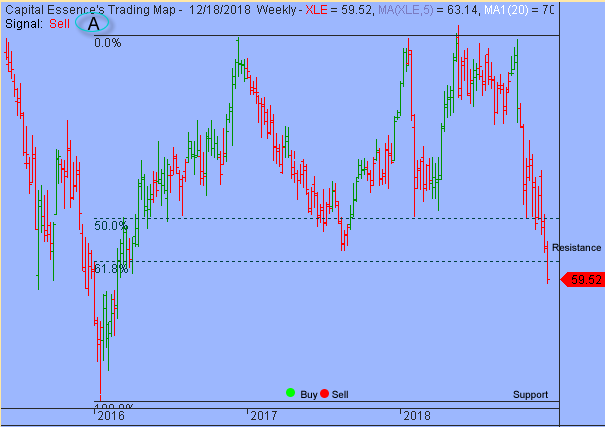 Our “U.S. Market Trading Map” painted XLE bars in red (sell) – see area ‘A’ in the chart.  Over the past few months, XLE has been trending lower after the early 2018 recovery rally ran out of steam near formidable resistance near the 79 zone.  The early December back to back massive selloff pushed the ETF below the 2017 low and the 61.8% Fibonacci retracement of the 2016 upswing.  This is a bearish development, suggesting that the entire trend will eventually be retraced.  XLE has minor support near 55.  A close below that level has measured move to around 50, or the 2016 low. 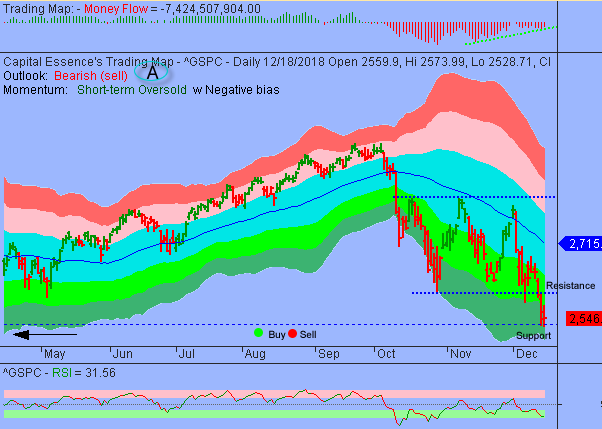 S&P continues basing sideways using the early 2018 low as support.  Money Flow measure trended lower but still well above the November lows, indicating less supply is coming into the market.  The fact that selling pressure has eased as the S&P hovers near key price level does not favors a deep decline.  With this in mind we’d be cautious against taking new short positions at this stage.

For now, 2600 is the line in the sand.  There is a no reason to turn particularly bullish until this area is eclipsed.

In summary, current price structure suggests that the S&P is in a process of establishing a near-term support plateau from where a new up-leg will base and climb in the days ahead.