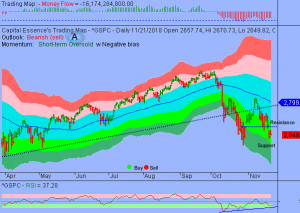 We’ve noted in the previous Market Outlook that: “S&P broke key support Tuesday but return of short-term oversold condition on the daily chart could help minimize downside follow-through and widespread breakdowns.”  As anticipated, S&P found some reprieve on Wednesday with a slim gain of 0.3 percent tech stocks mounting a rebound effort.  The Nasdaq Composite gained 0.9 percent and the Dow Jones Industrial Average finished flat.  The CBOE Volatility Index (VIX), widely considered the best gauge of fear in the market, tumbled more than 7 percent to 20.80.

Transport stocks caught a bid Wednesday as airline stocks outperformed with no specific catalyst, but relatively lower oil prices and an anticipated 30.5 million people flying this Thanksgiving weekend helped support the group. After surging more than 17 percent in 2017, the iShares Transportation Average ETF (IYT) rose 1.5 percent on the day but is down 2.5 percent YTD, slightly underperformed the S&P.  Now the question is whether recent selloff is a pause that refreshes or it’s a beginning of something worse?  Below is an update look at a trade in IYT. 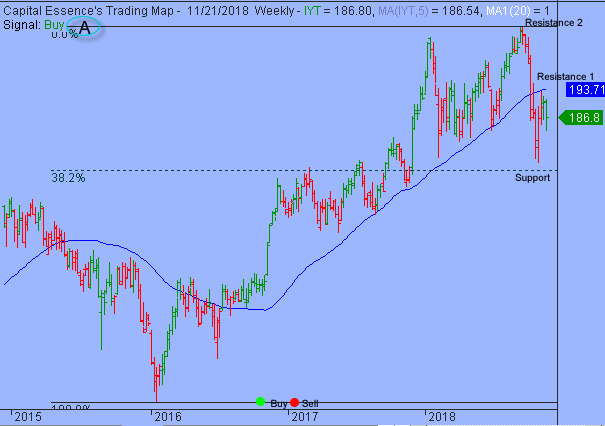 Our “U.S. Market Trading Map” painted IYT bars in green (buy) – see area ‘A’ in the chart. The first dominant feature on the chart is the rising trend starting in early 2016.  The second dominant feature of the chart is the downward trend since late September 2018, which represented the digestion period.  The correction found support near the 38.2% Fibonacci retracement.  Over the past few weeks, IYT has been basing sideways near the 1-year moving average.  That level was significant when the ETF fell below it in October. It’s now acting as strong resistance.  There is no reason to turn particular bullish until this zone is eclipsed.

IYT has resistance just below 194.  A close above that level has measured move to 209, or the 2018 high.  Support is around 175.  Short-term traders could use that level as the logical level to measure risk against. 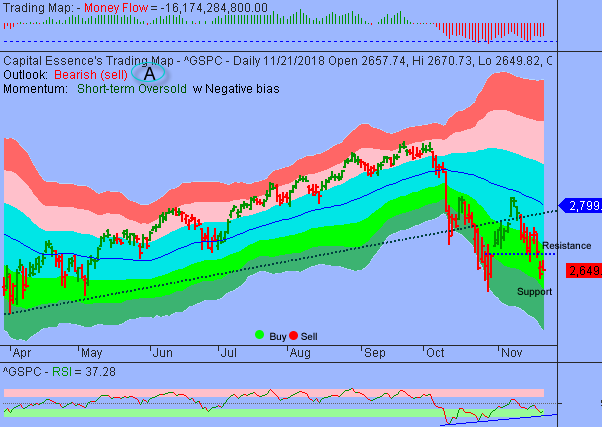 S&P moved up to test resistance at Tuesday’s breakdown point.  Momentum indicator shifted higher from near oversold zone, indicating selling pressure has eased.  Nevertheless, Money Flow measure is below the zero line, suggesting rallies are counter trend and will be sold.  With this in mind, we’d look to reduce exposure into intraday bounces.  S&P has 2600 to trade against.  A close below that level on a weekly basis will open the flood gate toward 2300 by year end.

As for resistance, there is a strong band of resistance between 2750 and 2760.  There is no reason to turn particular bullish until this zone is eclipsed.

In summary, for the near-term, some consolidations will unfold between the 2600 and 2700 levels on the S&P.  While seemingly vulnerable to further short-term weakness, the 2600s zone is too big and too important to fall quickly.  Short-term traders could play the range. However, markets are volatile and traders may prefer not to hold large positions overnight.