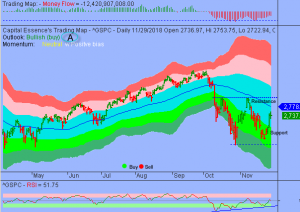 We’ve noted in the previous Market Outlook that: “S&P cleared key technical resistance, breaking out from the one-week congestion trading pattern.  However, given the looming resistance near 2780, there is no big commitment to accumulate stocks aggressively at this point.”  As anticipated, stocks succumbed to early profit-taking from Wednesday’s Powell-driven rally, market gradually climbed from session lows that saw the S&P traded as high as 2,753 before sellers stepped in and pushed the market lower.  For the day, the bench mark gauge fell 0.2 percent. The Dow Jones Industrial Average lost 0.1 percent.  The Nasdaq Composite lost 0.3 percent.  The CBOE Volatility Index (VIX), widely considered the best gauge of fear in the market, rose more than 1 percent to 18.79.

The financial sector was pressured by weak housing data. Pending home sales declined 2.6% in October, reported on the heels of a report showing new home sales declined 8.9% in October. The weak reports have fueled concerns about weakening mortgage loan demand, which is a negative for many banks. The Financial Select Sector SPDR ETF (XLF) fell 0.85 percent on the day and is down nearly 4 percent YTD, underperformed the S&P by a wide margin.  Now the question is whether Thursday selloff is a pause that refreshes or it’s a beginning of a new down leg?  Below is an update look at a trade in XLF. 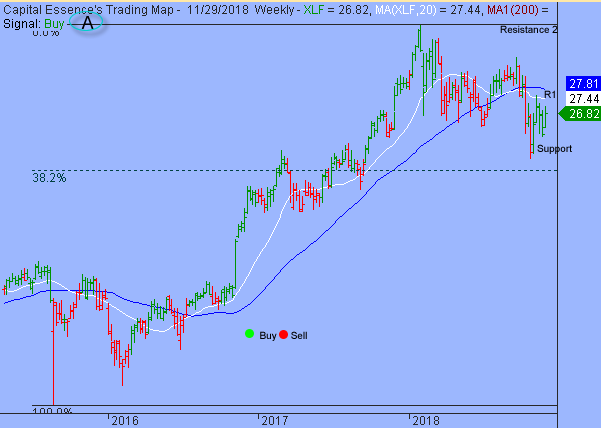 Our “U.S. Market Trading Map” painted XLF bars in green (buy) – see area ‘A’ in the chart. The first dominant feature on the chart is the rising trend starting in late 2015.  The second dominant feature of the chart is the downward trend since early 2018, which represented the digestion period.  The correction found support near the 38.2% Fibonacci retracement.   Over the past few weeks, XLF has been basing sideways near the overhead resistance after the early November recovery rally ran out of steam near 27.50.  Right now the most important thing to watch is trading behavior near the 28 zone.  A close above that level on a weekly basis has measured move to just above 30, or the prior high set earlier this year.

XLF has support near 26.  Short-term traders could use that level as the logical level to measure risk against. 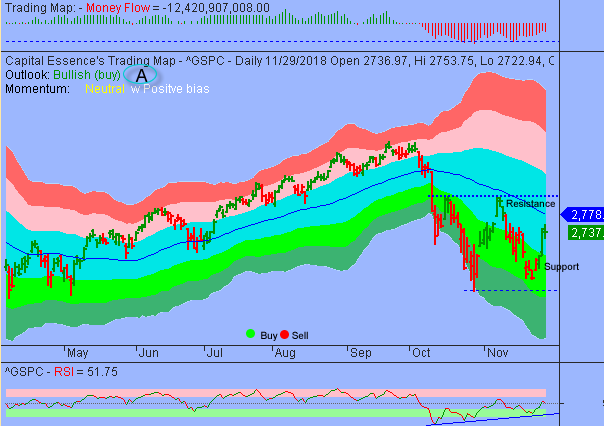 S&P moved up to test the overhead resistance zone following Wednesday bullish breakout.  In accordance to the Japanese candlestick pattern recognition, Thursday’s narrow range (or neutral) bar indicates uncertainty – traders refuse to press hard one way or the other just because they are not very sure about the near-term direction.  Although a single bar does not form a trend so this is not a call for a top, rather it is a warning signal, a sign in which the market is telling us that it is ready for a pause.

Money Flow measure trended higher from below the zero line, indicating selling pressure had eased.  Momentum has been strengthened but it’s much closer to overbought than oversold territory after recent advance.  These elements increased the probability for a short-term consolidation.

Right now the most important thing to watch is the rally and retreat behavior as the 2760-2815 zone, or the trend channel moving average and the multi-year rising trend line, is tested as resistance.  A close above 2815 signify a bullish breakout and setting the stage for a rapid advance toward the prior high set in October.

In summary, S&P turned indecisive near key technical resistance.  Our near-term technical bias on the index favors a short-term consolidation.  However, the overall technical backdrop remains bullish so pullback should consider as buying opportunity and not chances to take profit or get out.