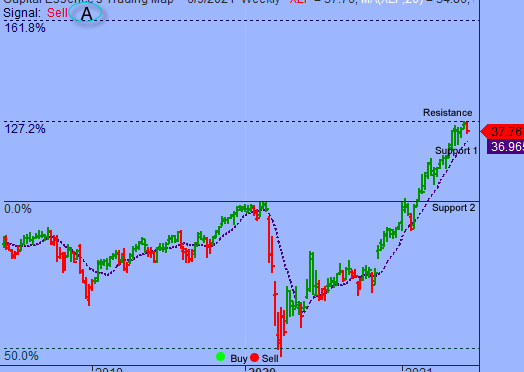 We’ve noted in the previous Market Outlook that: “technical pressures are building up as the market dances its way into an increasingly tight trading range.”  As anticipated, S&P fell slightly Wednesday, dipped 0.2 percent to 4,219.55, as tech lost some of its gains, while financials were dragged lower by falling rates as investors appear to be buying into the Federal Reserve’s view that inflation is transitory ahead of Thursday’s consumer price report.  The Dow Jones Industrial Average fell 0.4 percent to 34,447.14.  The Nasdaq Composite gave up 0.1 percent to 13,911.75.  The CBOE Volatility Index (VIX) widely considered the best gauge of fear in the market, rose about 5 percent to 17.89.

Falling yields were not welcomed in financials as regional and large bank stocks came under pressure amid concerns about lower net interest margin.  Charles Schwab (SCHW) was down 3 percent, JPMorgan Chase & Co (PM) fell 1 percent and Citizens Financial Group Inc (CFG) slipped 2 percent.  As such, the Financial Select Sector SPDR Fund (XLF) fell 0.94 percent on the day and is up more than 28 percent YTD, outperformed the S&P.  Now the question is what’s next?  Below is an update look at a trade in XLF. 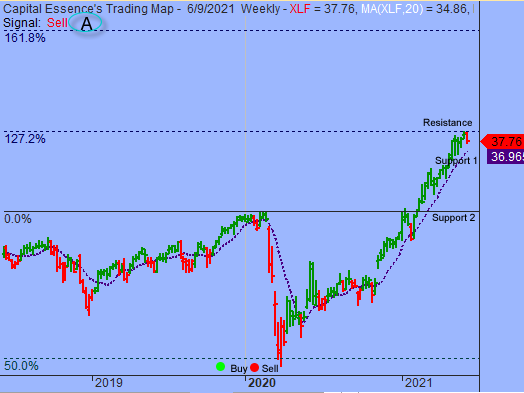 Our “U.S. Market Trading Map” painted XLF bars in red (sell) – see area ‘A’ in the chart. Over the past months, XLF has been trending steadily higher after breaking out above the 2020 high in February.  The rally tested resistance at the 127.2% Fibonacci extension.  This week’s bearish reversal signal suggested that the resistance would hold at least for the time being.  A close below 37 on a weekly basis will confirm this and a retest of the more important support near the 35-32 zone.

XLF has resistance just below 39.  Short-term traders could use that level as the logical level to measure risk against. 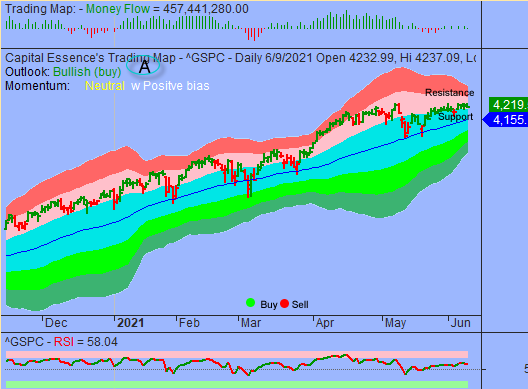 As it was the case of late, the S&P continues basing sideways near the lower boundary of the pink band.  That level was significant when the index fell below it in early May.  Money Flow measure flattened near zero line, indicating a lack of commitment among the bulls. Momentum indicator whipsaws below overbought zone, suggesting further backings and fillings likely.  For now, 4200 is the line in the sand.  We’d turn particular bearish if the index closes twice below that level.

On the upside, resistance is strong near the 4300 zone.  That level roughly corresponds with the lower boundary of the red band.  The normal behavior for the S&P has been to consolidate and retreated almost every time it traded above that level, the way we had earlier this year so there is a high probability that a significant consolidation pattern will again develop in the coming days.  Nonetheless, the overall technical backdrop continues favor the bulls so we believe that any dips are a buying opportunities rather than time to take profits and get out.

In summary, although return of overbought conditions on an intraday basis is keeping buyers at bay, the early May high, around S&P’s 4236, continues to act as price magnet.  It is possible that S&P could continue to drift higher as trading sentiment remains strong.  As for strategy, buying into short-term dips remains the most profitable strategy.