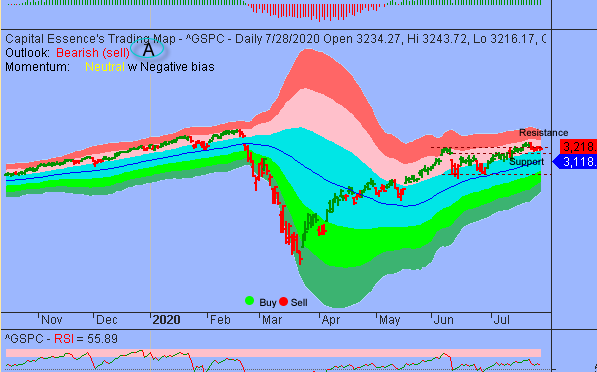 We’ve noted in the previous Market Outlook that: “S&P could continue to drift higher going into the end of the month as trading sentiment remains strong.  The near-term technical outlook however, remains negative, suggesting that this is not a time to accumulate stocks aggressively.”  As anticipated, S&P closed lower Tuesday, dipped 0.6 percent to 3,218.44, after the early rally attempt was met with a new wave of selling interest.  The Dow Jones Industrial Average fell 0.8 percent to 26,379.28. The Nasdaq Composite dropped 1.3 percent to 10,402.09.  The CBOE Volatility Index (VIX), widely considered the best gauge of fear in the market, rose more than 2 percent to 25.33.

Served as a reminder that the recent spike in cases across the U.S. has put the economic recovery in jeopardy as the consumer, the backbone of the economy, showed signs of weakness in July.  The U.S. consumer confidence index fell to 92.6 in July, down from a revised 98.3 in June, according to The Conference Board.  As such, the Consumer Discretionary Select Sector SPDR ETF (XLY) fell 1 percent on the day but is up about 8 percent YTD, outperformed the S&P.  Now the question is what’s next?  Below is an update look at a trade in XLY. 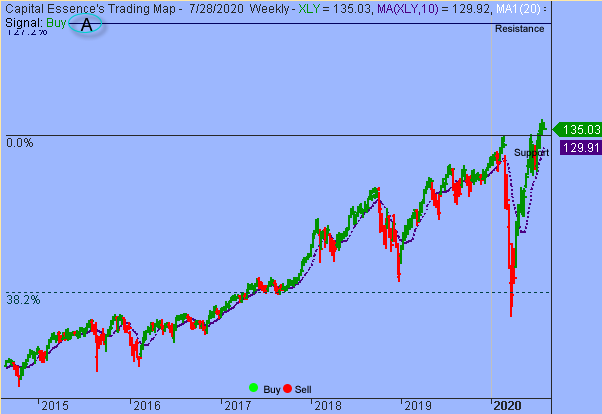 Our “U.S. Market Trading Map” painted XLY bars in green (buy) – see area ‘A’ in the chart.  After dropping about 40 percent from its February high, just above 132, and met the anticipated support near the 38.2% Fibonacci retracement of the 2009-2020 major upswing, XLY had retraced all of the massive lost and some more, breaking out above the February high in early July.  Over the past few weeks, XLY has been basing sideways using the 133 zone as support as traders digested overbought conditions.  The fact that the ETF managed to hold on to most of the March-June massive gain is impressive, suggesting that it will move up to test the 127.2% Fibonacci extension, just above 160, as soon as it shakes off excessive optimism.

XLY has support near 130.  Short-term traders could use that level as the logical level to measure risk against. 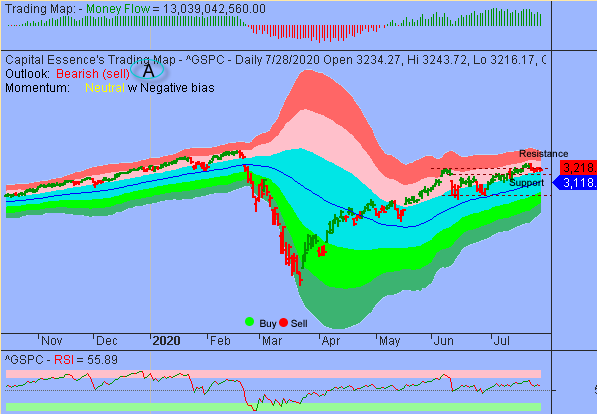 Once again, the S&P moved down to test support at the lower boundary of the pink band after the early rally attempt ran out of steam just below the closely watch 3250 zone.  Market internal has been weakened but downside momentum does not appear strong enough to generate a widespread breakdown.  Additionally, Money Flow measure held firmly above the zero line, indicating a positive net demand for stocks.  This could help putting a short-term floor under the market.

Over the next few days, the most important thing to look for is trading behaviors as 3200 is tested as support. A close below that level signals a medium-term correction with target around 3100.

In summary, our near-term work on price pattern and momentum suggested strongly that the S&P is in a midst short-term pullback correction phase that could last about 5 to 10 trading sessions.  While the near-term technical bias is skewed toward further weakness, the bulls should not get into any serious trouble as long as the index holds above 3200.