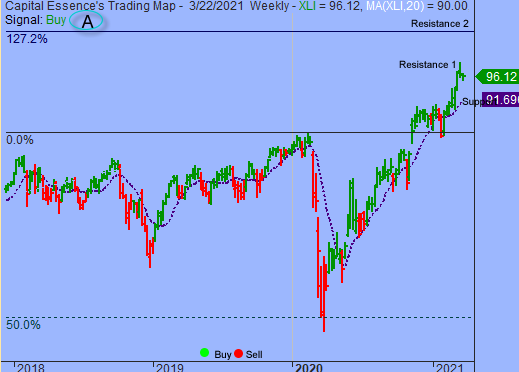 The S&P closed near record highs Monday, rose 0.7 percent to 3,940.59, led by tech as investor appetite for growth stocks returned in the wake of a pullback in U.S. bond yields.  The United States 10-Year yield closed below 1.7 percent following a surge to 14-month highs last week.  The Dow Jones Industrial Average climbed 0.3 percent to 32,731.20.  The tech-heavy Nasdaq Composite gained 1.2 percent to 13,377.54.  The CBOE Volatility Index (VIX), widely considered the best gauge of fear in the market, tumbled nearly 10 percent to 18.88.

Industrials got a boost after the New York Times reported that President Joe Biden is eyeing an infrastructure deal with as much as $3 trillion spending to boost the economy.  The Industrial Select Sector SPDR Fund (XLI) closed near the unchanged mark but is up nearly 9 percent YTD, outperformed the S&P.  Now the question is what’s next?  Below is an update look at a trade in XLI. 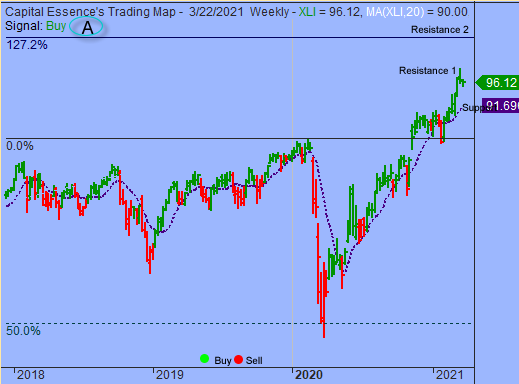 Our “U.S. Market Trading Map” painted XLI bars in green (buy) – see area ‘A’ in the chart.  Over the past few days, XLI has been trending lower in a short-term corrective mode after the February rally ran out of steam just below the important sentiment 100 zone.  The overall technical backdrop remains supportive of further advance so sell-off should be shallow because the sideline money will try to fight its way back into the market.  With this in mind, we’d look to increase exposure into short-term weakness toward the 2020 rising trend line, currently around 92.

Resistance is around 98.  A close above that level on a weekly closing basis will trigger acceleration toward the 104 zone, or the 127.2% Fibonacci extension.

XLI has support near 92.  Short-term traders could use that level as the logical level to measure risk against. 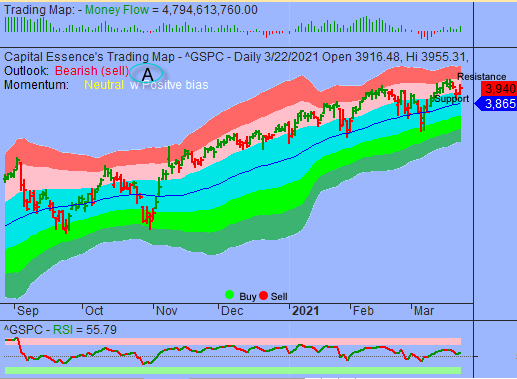 Once again, the S&P rebounded nicely after recent pullback found support near the trend channel moving average.  This is a positive development but let’s notice the return of overbought conditions on an intraday basis.  Additionally, while Money Flow measure trended higher, the indicator still well below the prior peak set in February, suggesting a weak net demand for stocks.  This could put a cap on the rally.

On the downside, the trend channel moving average, currently at 3865, is the line in the sand.  That level was tested several times over the past months.  When strong support is broken it means that near-term buying pressure has finally been exhausted.  With that said, a close below that level is outright bearish and a much deeper pullback should be expected and we’re looking at the low 3700s.

In summary, the fact that Money Flow measure printed a lower high as the S&P inches toward new high does not favor a sustain break to the upside.  Our near-term works on price structure and momentum suggested strongly that the S&P remains in for a ‘range-bound’ trading environment.  This is a rally and retreat environment. It is not a trending environment. Short-term traders can anticipate continued volatility with rapid up and down moves in the markets.