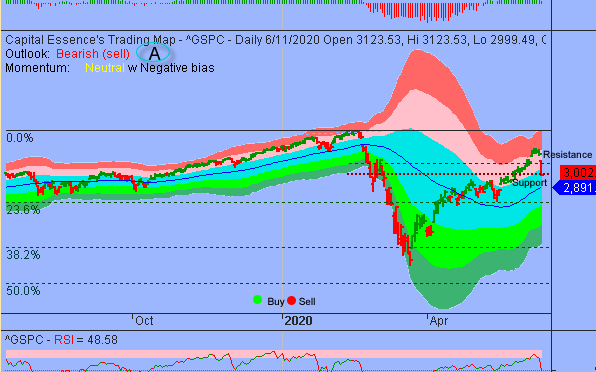 The Dow Jones Industrial Average plunged nearly 7 percent to close at 25,128.17 Thursday, suffering its biggest one-day decline since March, as a jump in new Covid-19 infections that threatens to slow down the pace of the reopenings prompted investors to ditch stocks and flee to safety.  The S&P slid 5.9 percent to 3,002.10 while the Nasdaq Composite dropped 5.3 percent to 9,492.73.  The CBOE Volatility Index (VIX), widely considered the best gauge of fear in the market, soared 48 percent to 40.79.

Energy, travel, and bank stocks, which together had been pushed on the progress of the economic reopening, bore the brunt of selling, sending the broader market sharply lower.  Citigroup (C), Wells Fargo (WFC) and JPMorgan (JPM) fell between 8 and 13 percent, pressured by falling Treasury yields and fresh fears that a long road to economic recovery could force banks to sock away more cash to offset loan defaults.  As such, the Financial Select Sector SPDR ETF (XLF) tumbled 8.2 percent on the day and is down nearly 25 percent YTD, underperformed the S&P.  Now the question is what’s next?  Below is an update look at a trade in XLF. 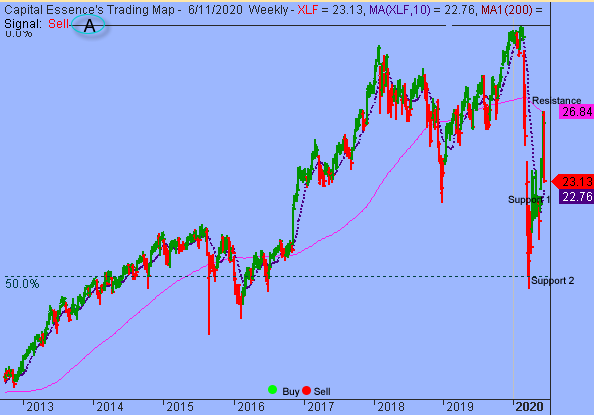 Our “U.S. Market Trading Map” painted XLF bars in red (sell) – see area ‘A’ in the chart.  XLF has been on a tear in recent weeks after the late February massive selloff found some solid footing near the 50% Fibonacci retracement of the 2009-2020 major upswing. The March rally pushed the ETF up against the 2-year moving average, a key technical level based on moving averages.  This week’s bearish trading action suggested that the resistance would hold and a retest of support at the March low should be expected.  XLF has minor support near 22.70.  A close below that level on a weekly closing basis will confirm this.

XLF has resistance just below 27.  Short-term traders could use that level as the logical level to measure risk against. 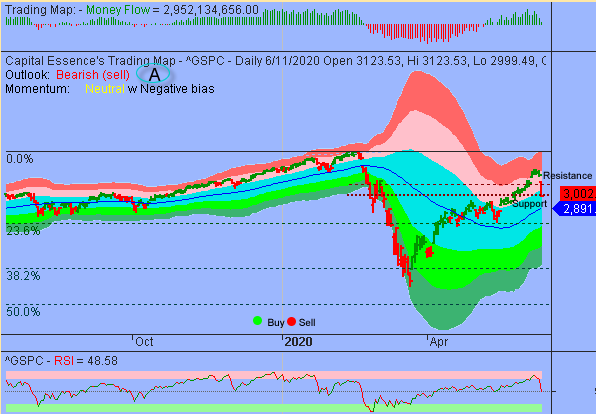 S&P moved down to test support at the important sentiment 3000 zone after falling below the lower boundary of the red band, or extreme overbought zone, on Tuesday. Market is no longer overbought following recent selloff but momentum has been deteriorated, suggesting that the bears are more aggressive as prices off than the bulls were as prices ascended.

For now, 3000 is the line in the sand.  A failure to hold above it indicated that long-term buying pressure has been exhausted and a much deeper pullback should be expected and we’re looking at 2890, based on the trend channel moving average.

In summary, market internals deteriorated as S&P’s testing key support.  S&P will have a downward bias this week, pressured by short-term negative momentum but we expect support to remain largely intact.