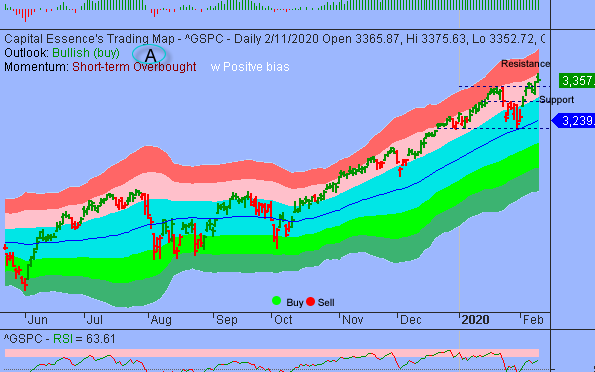 We’ve noted in the previous Market Outlook that: “it seemed to us that traders are committed to take the S&P up to the important sentiment 3400 zone.  Over the next few days, we will look for trading behaviors as the index probes the red band.  The market had historically developed key resistance near that level.”  As anticipated, stocks traded higher in early Tuesday session that saw the S&P traded as high as 3375 before sellers stepped in and pushed prices off the intraday high.  For the day, the broad index added 0.2 percent to 3,357.75. The Nasdaq was up 0.1 percent to 9,638.94. The Dow Jones Industrial Average rose as much as 138 points before closing flat at 29,276.34.  The CBOE Volatility Index (VIX), widely considered the best gauge of fear in the market, rose nearly 1 percent to close at 15.18

The Federal Trade Commission issued special orders to five tech giants – including Alphabet’s Google (GOOGL), Facebook (FB), Microsoft (MSFT), Amazon.com (AMZN) and Apple (AAPL) – requesting information on historical mergers to gauge reporting practices to antitrust authorities.  The move raised fears over a more aggressive regulatory crackdown on big tech at a time when U.S. authorities are already investigating Google, Facebook, Amazon and others over potential anti-competitive behavior.  As such, the Communication Services Select Sector SPDR Fund (XLC) fell 0.11 percent on the day and is up nearly 5 percent YTD, slightly outperformed the S&P.  Now the question is whether the rally has more legs?  Below is an update look at a trade in XLC. 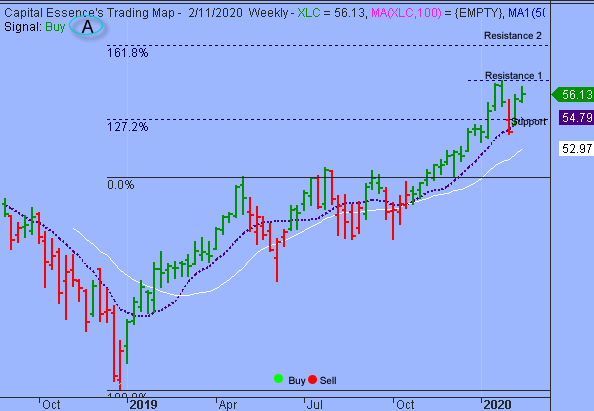 Our “U.S. Market Trading Map” painted XLY bars in green (buy) – see area ‘A’ in the chart. XLC has been on a tear in recent days after the late January correction found support near the late 2019 rising trend line.  That level roughly corresponds with the 127.2% Fibonacci extension of the 2018-2019 upswing.  This week’s upside follow-through confirmed last week’s bullish reversal signal.  This is a positive development, opened up for a retest of the late January high of 56.90.  if XLC could hurdle and sustain above that level then a test of the more important resistance near the 159 zone, or the 161.8% Fibonacci extension.

XLC has support just below 55.  Short-term traders could use that level as the logical level to measure risk against. 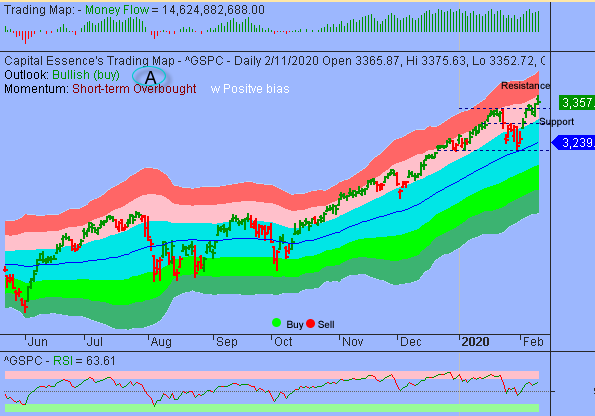 As expected, S&P moved up to test resistance at the lower boundary of the red band after breakout above the prior high set in early January.  In accordance to the Japanese candlestick pattern recognition, Tuesday’s narrow range (or neutral) bar indicates uncertainty – traders refuse to press hard one way or the other just because they are not very sure about the near-term direction.  This explains why market often uses neutral bar to change direction.  Momentum has been strengthened but does not appeared strong enough to generate widespread breakouts.  These elements suggested that S&P is vulnerable to some downside retracement over the short-to-intermediate term.

In summary, S&P has confirmed a breakout above key resistance in a reflection of improved momentums.  Nevertheless, market internals do not appeared strong enough to generate widespread breakouts. Over the short-to-intermediate term, market vulnerable to some downside retracement.