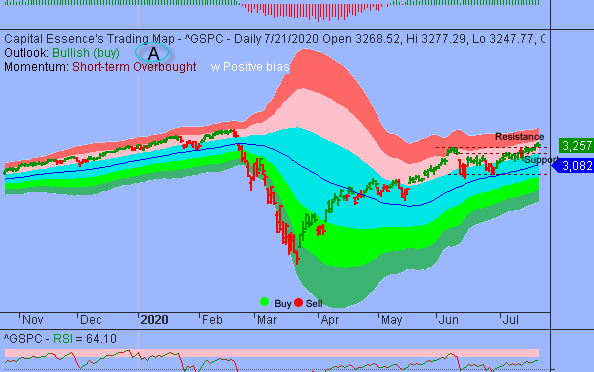 We’ve noted in the previous Market Outlook that: “S&P cleared key resistance, breaking out above the early June congestion zone. Our near-term work on momentum and price structure suggested that the rally can be sustained for a few days, potentially allowing for a test of 3300 before a significant pullback unfolds.”  As anticipated, S&P opened higher Tuesday, traded as high as 3277 before gave back most of the early gains after Senate Majority Leader Mitch McConnell reportedly said he does not expect that the bill, which includes new money for the paycheck protection program, and seeks to extend the program by at least six months, would be rolled out within the next two weeks.  For the day, the bench mark gauge added 0.2 percent to 3,257.30.  The Dow Jones Industrial Average rose 0.6 percent to 26,840.40.  The Nasdaq Composite, meanwhile, dropped 0.8 percent to 10,680.36.  The CBOE Volatility Index (VIX), widely considered the best gauge of fear in the market, rose nearly 2 percent to 24.84.

Financials were also among the biggest gainers, with banks up sharply following their mostly bullish earnings last week.  Wells Fargo (WFC) jumped 6.6 percent after announcing Mike Santomassimo would become replace retiring John Shrewsberry as chief financial officer.  As such, the Financial Select Sector SPDR ETF (XLF) rose 1.97 percent on the day but is down about 21 percent YTD, underperformed the S&P.  Now the question is what’s next?  Below is an update look at a trade in XLF. 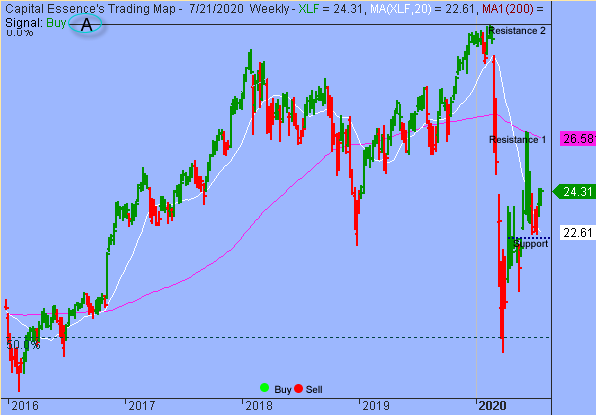 Our “U.S. Market Trading Map” painted XLF bars in green (buy) – see area ‘A’ in the chart.  Over the past few weeks, XLF has been trending higher after the early June selloff found some solid footing near the late May breakout point, around 22.50.  This week’s upside follow-through confirmed last week’s bullish reversal signal.  This is a positive development, opened up for a retest of the 2-year moving average, currently at 26.50.  That level was tested in early June.  A sustain advance above it signify a bullish breakout and setting the stage for an acceleration toward the early 2020 high, just above 31.

XLF has support near 22.50.  Short-term traders could use that level as the logical level to measure risk against. 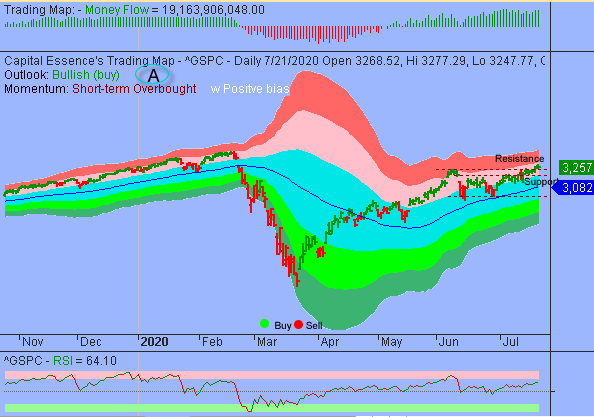 As expected, S&P moved up to test resistance at the lower boundary of the red band, roughly corresponds with the important sentiment 3300 mark, after breakout above the early June congestion zone on Monday.  The late day selloff suggested that the resistance would hold.  Money Flow measure is registering a bullish signal.  The indicator is at the highest level going back to early 2019.  This is a positive development but let’s notice the return of overbought conditions on the daily chart. At 3257, the S&P is less than 2 percent to the red band, or extreme overbought zone.  Technical speaking, the normal behavior for the S&P has been to consolidate and retreated almost every time it traded above that level so there is a high probability that a significant consolidation pattern will again develop in this area.

S&P has minor support near 3225.  A failure to hold above that level will invalidate Monday’s bullish signal and a retest of the 3200-3150 should be expected.