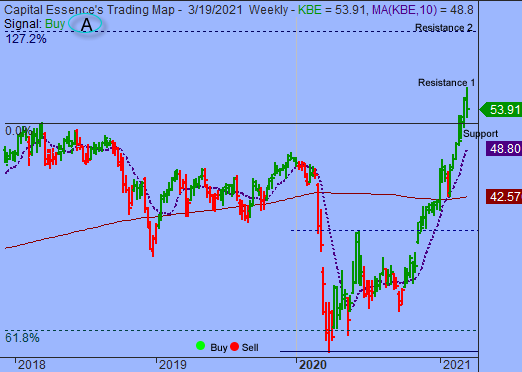 The United States 10-Year yields, which trade inversely to prices, retreated Friday after hitting 1.75% as the Federal Reserve said it would not extend the supplementary leverage ratio exemptions– a measure that had allowed banks to hold lower capital reserves – beyond the March 31 deadline. The action from the Fed and subsequent move in yields dealt a blow to banking stocks.  JPMorgan Chase (JPM), down 2 percent, and Wells Fargo (WFC), down 3 percent, led the declines.  As such, the SPDR S&P Bank ETF (KBE) fell 0.97 percent on the day but is up about 29 percent YTD, outperformed the S&P.  Now the question is what’s next?  Below is an update look at a trade in KBE. 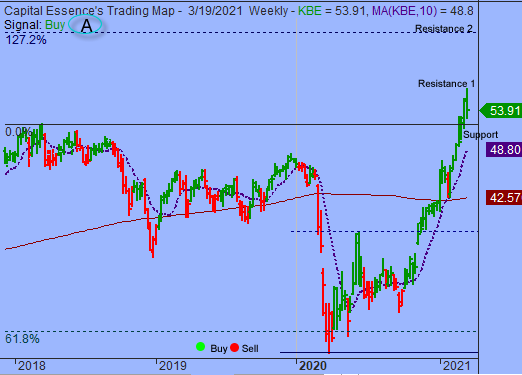 Our “U.S. Market Trading Map” painted KBE bars in green (buy) – see area ‘A’ in the chart.  KBE has been on a tear in recent days after the early 2021 correction found support near the late 2020 rising trend line.  The February rally pushed the ETF above the closely watch 52 zone, or the early 2018 high.  Last week’s selloff suggested that the stage has been set for a test of support at the 49-52 zone.  The overall technical backdrop remains positive, suggesting that pullback should be shallow and quick.  Resistance is around 56.  A sustain advance above that level on a weekly closing basis will trigger acceleration toward the 63 zone, or the 127.2% Fibonacci extension.

KBE has support near 49.  Short-term traders could use that level as the logical level to measure risk against. 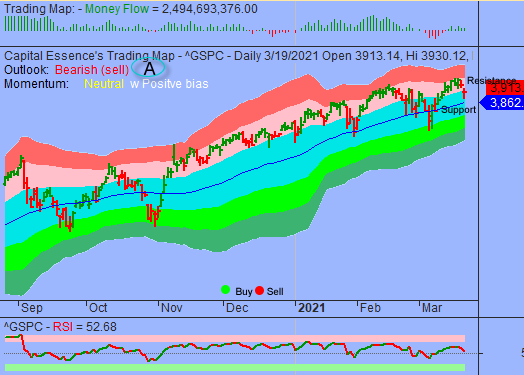 As expect, S&P moved down to test support at the trend channel moving average after recent test of resistance at the lower boundary of the red band was met with a new wave of selling interest. Market internal has been deteriorated following recent decline but downside momentum does not appear strong enough to generate widespread breakdowns.

On the downside, the trend channel moving average, just above 3860, is the line in the sand.  That level was tested several times over the past months.  When strong support is broken it means that near-term buying pressure has finally been exhausted.  With that said, a close below that level is outright bearish and a much deeper pullback should be expected and we’re looking at the low 3700s.

In summary, trading behaviors in the S&P constrained by a short-term sideways pattern and shown little evidence of a sustainable change in trend.  For now, 4000 is the line in the sand.  There is a no reason to turn particularly bullish until this area is taking out.