Stocks rose sharply on Tuesday as traders cheers a fresh batch of better-than-expected earnings reports. For the day, the Dow Jones Industrial Average jumped 2.17 percent to 25,798.42. The S&P gained 2.1 percent to 2,809.92. The Nasdaq Composite advanced 2.9 percent to 7,645.49.  The CBOE Volatility Index (VIX), widely considered the best gauge of fear in the market, fell more than 17 percent close at 17.62.

One of the more noteworthy developments in recent days has been the move in commodities.  After surging more than 30 percent in 2017, the Invesco DB Base Metals (DBB) up 0.06 percent Tuesday to 16.53 on the day but is down nearly 15 percent YTD, underperformed the S&P by a wide margin.  Now the question is whether recent pullback is a pause that refreshes or it’s a beginning of something worse?  Below is an update look at a trade in DBB. 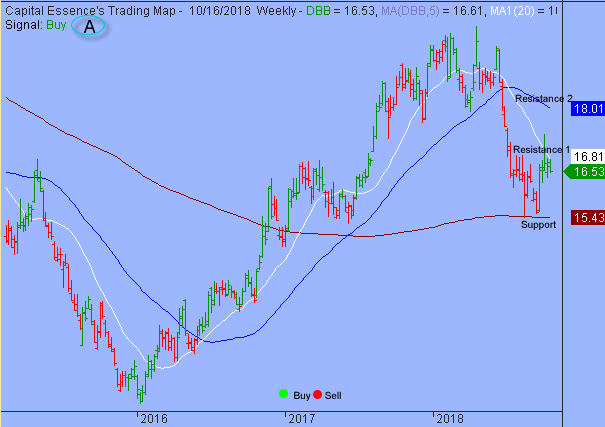 Our “U.S. Market Trading Map” painted DBB bars in green (buy) – see area ‘A’ in the chart.  The first dominant feature on the chart is the rising trend line starting in early 2016.  The second dominant feature of the chart is the downward trend since early 2018.  The June downswing tested and respected support at the 4-year moving average, a key technical level.  The late September rally pushed the ETF up against the 20-week moving average.  Over the past few weeks, DBB has been basing sideways as traders digested overbought conditions.  This is a short-term positive development, suggesting that the ETF might take a leg higher as soon as it works off excessive bullishness.  Resistance is just below 17.  A close above that level on a weekly basis has measured move to around 18.

DBB has support near 15.40.  Short-term traders could use that level as the logical level to measure risk against 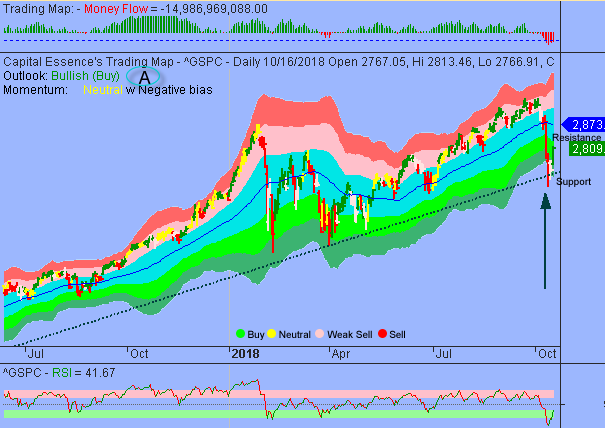 As expected, the S&P bounced off support at the 2016 rising trend line.  The index moved up to test resistance at the upper boundary of the green band after falling below that level last week. The index trades in broad trading bands that define the trend behavior. The upswing was very rapid with some short-term consolidation near each of the significant support or resistance levels. These support and resistance levels also define the limits and barriers to any future rally and uptrend development.  Momentum has been strengthened following recent rally but do not appeared strong enough to generate widespread breakouts.  Additionally, Money Flow measure still hovers near the lowest level since summer 2017, indicating a negative net demand for stocks.  With this in in mind, we would consider taking down exposure into short-term rallies.

Longer term, the uptrend that began in 2016 is still intact.  2700 is the line in the sand.  A close below that level on a weekly basis will break the long-term uptrend and a retest of the early 2018 lows should be expected.

In summary, so far the upswing that started off the October low of 2710 on the S&P has proved nothing as far as its staying power or as a possible major upswing.  Resistance is strong between the 2823-2873 zone and upside momentum does not appear strong enough to generate a decisive breakout.  With this in in mind, we would consider taking down exposure into additional strength.