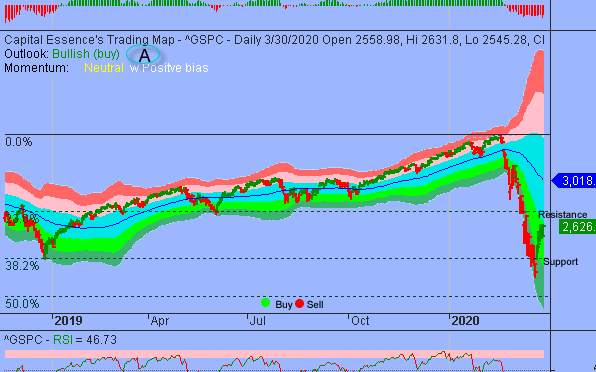 We’ve noted in the previous Market Outlook that: “while last week’s recovery rally appeared to have run out of steam, the short-term uptrend pressure remains up and the daily charts are still building on encouraging formations. Though there just isn’t enough bullish power to fuel a significant push upward from here. With all that said, the market needs some sorts of positive catalysts and a good consolidation to build up the needed energy for a new leg higher.”  As anticipated, stocks made a bright start to the week on Monday, building on a strong rally from last week as the U.S. extended measures to contain the coronavirus outbreak. The S&P climbed 3.4 percent to 2,626.65.  The Dow Jones Industrial Average gained 3.2 percent to 22,327.48.  The Nasdaq Composite rose 3.6 percent to 7,774.15.  The CBOE Volatility Index (VIX), widely considered the best gauge of fear in the market, fell nearly 13 percent to 57.08.

The S&P healthcare sector outperformed led by Johnson & Johnson (JNJ) and Abbot Laboratories (ABT).  J&J shares climbed 8 percent after the company said it identified a lead vaccine candidate for the coronavirus. The company noted that human testing on the potential vaccine will begin in September. Abbott Laboratories climbed 6.41 percent after winning U.S. approval for a diagnostic test for COVID-19.  As such, the Health Care Select Sector SPDR ETF (XLV) surged 4.68 percent on the day but is down more than 12 percent YTD, outperformed the S&P.  Now the question is whether the rally has more legs?  Below is an update look at a trade in XLV. 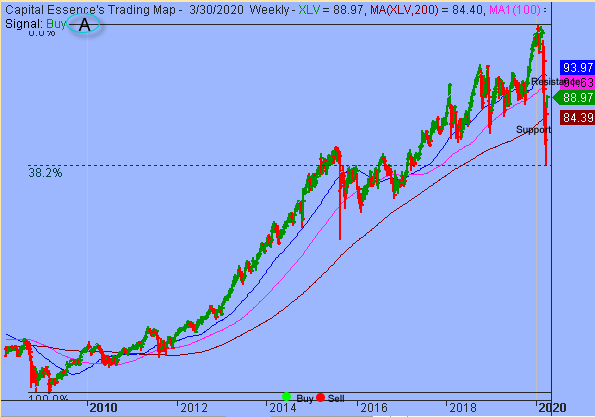 Our “U.S. Market Trading Map” painted XLV bars in green (buy) – see area ‘A’ in the chart.  Like the rest of the market, XLV is in free fall mode since February after the late 2019 rally ran out of steam just above the 100 mark.  The March correction tested support at the 38.2% Fibonacci retracement of the 2009-2020 major upswing.  This week’s bullish trading action suggested that an important near-term low has been established and the ETF is in an early stage of a new upswing that projects to 91.50 but has an overshoot target of 94.

XLV has support near 84.  Short-term traders could use that level as the logical level to measure risk against. 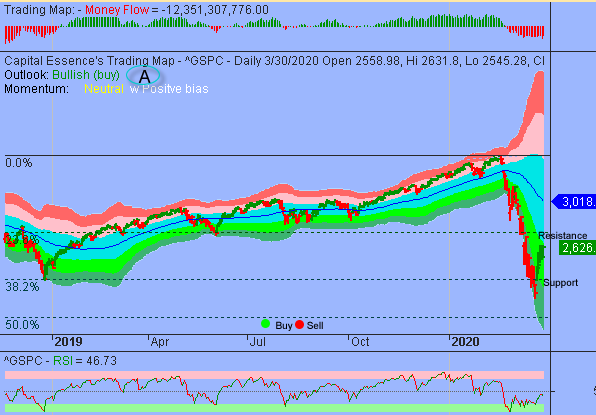 S&P basing sideways near the upper boundary of the green band after the last week’s recovery rally ran into resistance near the 2650 zone.  The main event here is the upward push against key resistance at the upper boundary of the green band.  That level was significant when the index fell below it in late February.   Money Flow measure hovers near the lowest level going back to late 2018, indicating a negative net demand for stocks.  Momentum has been strengthened over the past few days but does not appeared strong enough to fuel a significant push upward from here.

For now, 2650 represents key overhead resistance.  If the market is going to find bottom in the near term, we want to see the S&P stabilizes and climbs above 2650.  Staying below that level heralds more losses.  With that said, a weekly close above 2650 will turn the medium-term trend up and trigger acceleration toward the 2900 zone.

Last week’s bullish breakaway gap, around 2350, represents key support.  A failure to hold above that level will bring the 2200 back into view.

In summary, S&P shifted to holding pattern as traders wondered whether more gains are warranted given the massive advance over the past week.  While we remain near term bullish on the S&P, we believe that the market needs some sorts of positive catalysts to build up the needed energy for a new leg higher.