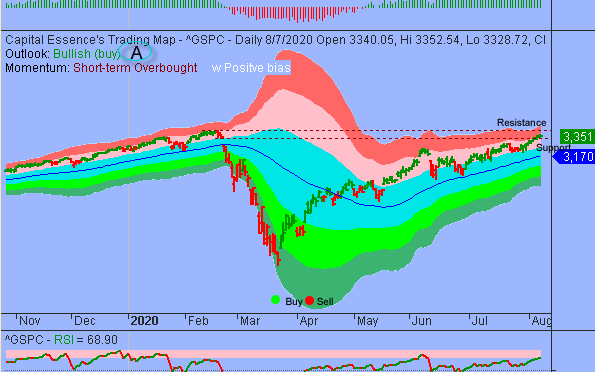 We’ve noted in the previous Market Outlook that: “overbought conditions have returned on a daily basis but momentum remains supportive so downside risk could be limited. It is possible that S&P could continue to drift higher as trading sentiment remains strong.  As for strategy, buying into short-term dips remains the most profitable strategy.”  As anticipated, S&P traded slightly lower in early Friday session amid concerns that lawmakers remain far apart on talks concerning the next wave of fiscal stimulus.  The bench mark gauge traded as low as 3.328 before buyers stepped in and pushed the prices off the intraday low.  For the day, the S&P added 0.1 percent to 3,351.28.  The Dow Jones Industrial Average rose 0.2 percent to 27,433.48.  The Nasdaq Composite lagged, falling 0.9 percent to 11,010.98.  The CBOE Volatility Index (VIX), widely considered the best gauge of fear in the market, fell nearly 2 percent to 22.26.

Defensive stocks outperformed Friday amid rising U.S.-China trade tensions, in the wake of Donald Trump’s decision to target Chinese tech.  Trump on Thursday issued executive orders against Chinese tech firms TikTok and WeChat, which he claimed would curb the “threat” they pose to U.S. national security.  As such, the Utilities Select Sector SPDR ETF (XLU) rose 1.8 percent on the day but is down about 5 percent YTD, underperformed the S&P.  Now the question is what’s next?  Below is an update look at a trade in XLU. 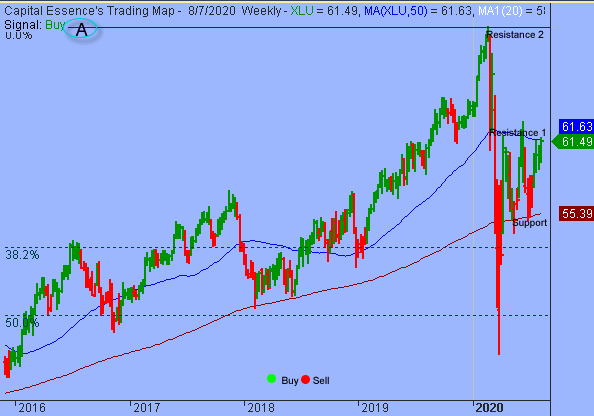 Our “U.S. Market Trading Map” painted XLU bars in green (buy) – see area ‘A’ in the chart.  The first dominant feature on the chart is the falling trend starting in early 2020.  The second dominant feature of the chart is the sideways consolidation between the 1-year and 4-year moving averages since early April 2020, which represents the digestion period. This week’s rally pushed the ETF up against the 1-year moving average, around 61.60.  This level was tested several times over the past months.  This history indicated an important role in term of resistance.  A sustain advance above that level signify a bullish breakout and open up for a test of the early 2020 high, around 71.

XLU has support just above 55.  Short-term traders could use that level as the logical level to measure risk against. 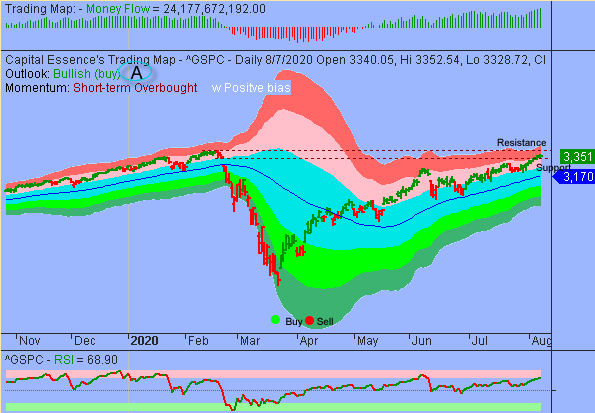 As expected, a short-term consolidation interrupted the secondary upswing in the S&P.  This is a short-term positive development and supported a few days of stabilizing around 3330, or the late February bearish breakaway gap.  As long as this support holds, the path of least resistance is to the upside.  With that said, a close below 3330 would signify a bearish breakout, supporting downside follow-through and a retest of the 3300-3250 zone in the days ahead.

In summary, market is overbought as S&P moved up to test resistance at the late February’s bearish breakaway gap.  Momentum remains supportive over the short to medium term and Money Flow measure is above the zero line, indicating a positive net demand for stocks.  This certainly would argue that the path with least resistance remains to the upside.  While some backing and filling would not be a surprise, the bulls will continue to have the benefit of the doubts as long as S&P holds above 3300.