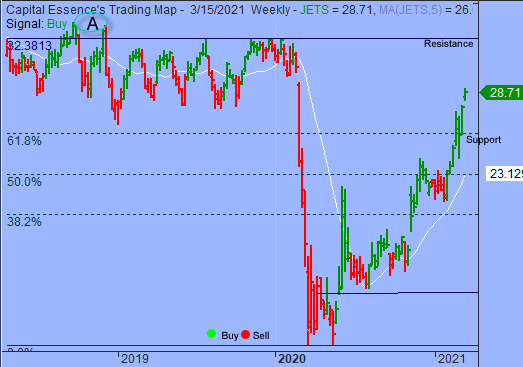 We’ve noted in the previous Market Outlook that: “overbought conditions have returned on a daily basis but momentum remains supportive so downside risk could be limited. It is possible that S&P could continue to drift higher as trading sentiment remains strong.  As for strategy, we’d look to reduce exposure into overbought strength, which might take the S&P closer to 4000 before a significant pullback unfolds.”  As anticipated, S&P 500 a tech-infused rally to record highs Monday, up 0.65 percent to 3,968.94, supported by falling U.S. rates and rising semiconductor stocks that helped brush aside a slip in energy and financials.  The Dow Jones Industrial Average rose 0.5 percent to 32,953.46. The Nasdaq Composite gained 1.1 percent to 13,459.71.  The CBOE Volatility Index (VIX), widely considered the best gauge of fear in the market, fell more than 3 percent to 20.03.

American Airlines and United Airlines shares rose 7.7 percent and 8.3 percent, respectively. Air travel over the weekend hit its highest level in more than a year as the Covid-19 vaccine rolls out and Americans return to vacationing.  As such, the US Global Jets ETF (JETS) jumped 3.72 percent on the day and is up more than 28 percent YTD, outperformed the S&P.  Now the question is what’s next?  Below is an update look at a trade in JETS.

Our “U.S. Market Trading Map” painted XLI bars in green (buy) – see area ‘A’ in the chart. JETS has been on a tear in recent days after the December 2020 correction found support near the 2020 rising trend line.  The February rally pushed the ETF above the closely watch 25 zone, or the 61.8% Fibonacci retracement of the 2020 downswing.  This is a bullish development, suggesting that the entire trend will eventually retrace.  So, it seems to us that this rally could carry JETS above 32, or the early 2020 high.

JETS has support near 25.  Short-term traders could use that level as the logical level to measure risk against. 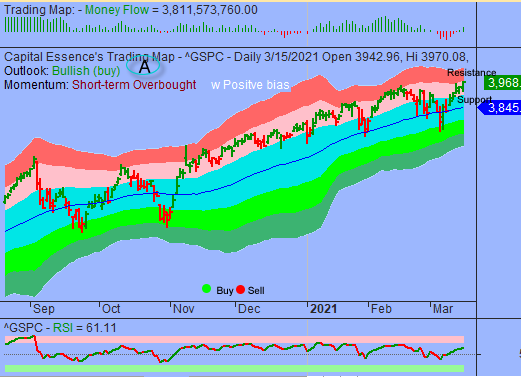 Once again, the S&P moved up to test resistance at the lower boundary of the red band after recent pullback found support near the lower boundary of the pink band.  Money Flow measure trended higher from above the zero line, indicating a positive net demand for stocks.  Momentum has been strengthened but the return of overbought conditions on an intraday basis will put a cap on the upside.  With this in mind, we’d look to reduce exposure into overbought strength, which might take the S&P closer to 4000 before a significant pullback unfolds.

In summary, S&P broke out to new high Monday, signified resumption of the multi-month upswing.  Overbought conditions have returned on an intraday basis but momentum remains supportive so downside risk could be limited. It is possible that S&P could continue to drift higher as trading sentiment remains strong.  With this in mind, we’d look to reduce exposure into overbought strength, which might take the S&P closer to 4000 before a significant pullback unfolds.