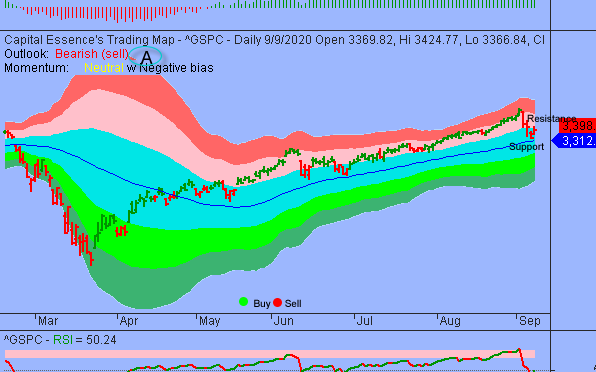 We’ve noted in the previous Market Outlook that: “while seemingly vulnerable to further short-term weakness, support is strong near 3300. That level is too big and too important to fall quickly.”  As anticipated, S&P ripped higher on Wednesday, jumped 2 percent to 3,398.96, as tech shares posted their best day in about four months, clawing back some of the steep losses that knocked the bench mark gauge below its record highs.  The Dow Jones Industrial Average added 1.6 percent to 27,940.47.  The NASDAQ Composite advanced 2.7 percent to 11,141.56.   The CBOE Volatility Index (VIX), widely considered the best gauge of fear in the market, fell more than 8 percent to 28.81.

Airlines however struggled, paced by a nearly 3 percent decline in United Airlines Holdings (UAL) after the carrier trimmed its third-quarter guidance on capacity and passenger revenue.  As such, the U.S. Global Jets ETF (JETS) fell 1.6 percent on the day and is down 43 percent YTD, underperformed the S&P.  Now the question is what’s next?  Below is an update look at a trade in JETS. 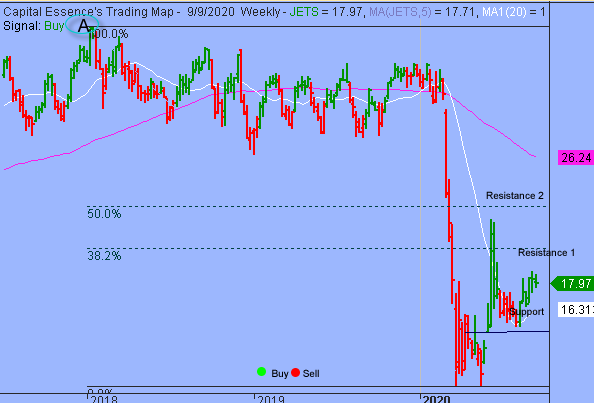 Our “U.S. Market Trading Map” painted JETS bars in green (buy) – see area ‘A’ in the chart. Over the past few weeks, JETS has been trending higher after the early June selloff found some solid footing near the late May breakout point.  Despite this week’s setback, the overall technical backdrop remains supportive of further advance.  JETS has resistance just above 20, or the 38.2% Fibonacci retracement.  A sustain advance above that level will open up for a test of the 50% Fibonacci retracement, around 23.

JETS has support near 16.30.  Short-term traders could use that level as the logical level to measure risk against. 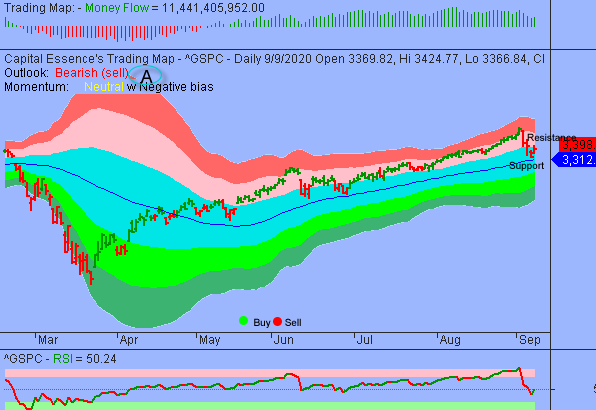 As expected. S&P moved up to test resistance at the lower boundary of the pink band after recent pullback found support near the trend channel moving average.  That level is significant in charting terms.  A sustain advance above that level will turn the short-term trend up, confirming that the Wednesday’s recovery rally is more than a dead-cat bounce.  With that said, a close above 3430 would support upside follow-through and a test of more important resistance in the 3500 area in the coming days.  Traders however, must be mindful the damages done over the past days, there is a no reason to turn particularly bullish until the 3500 zone is eclipsed.

In summary, our near-term work on price structure and momentum suggested that the S&P is in a midst of a short-term oversold bounce. The bulls must hurdle and sustain above 3430 or market will work off oversold conditions and fall under its own weight.