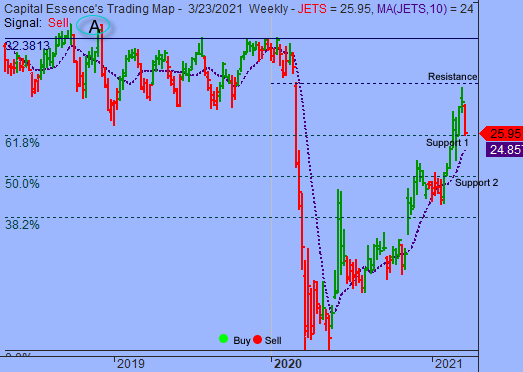 We’ve noted in the previous Market Outlook that: “the fact that Money Flow measure printed a lower high as the S&P inches toward new high does not favor a sustain break to the upside.  Our near-term works on price structure and momentum suggested strongly that the S&P remains in for a ‘range-bound’ trading environment.  This is a rally and retreat environment. It is not a trending environment. Short-term traders can anticipate continued volatility with rapid up and down moves in the markets.”  As anticipated, S&P fell Tuesday, down 0.76 percent to 3,910.52, on the anniversary of its post-pandemic bounce, as supportive remarks from Federal Reserve chair Jerome Powell and U.S. Treasury Secretary Janet Yellen were overshadowed by global growth worries amid fresh lockdowns in Europe.  The Dow Jones Industrial Average gave up 0.94 percent to 32,423.15.  The tech-heavy Nasdaq Composite lost 1.12 percent to 13,227.70.  The CBOE Volatility Index (VIX), widely considered the best gauge of fear in the market, jumped more than 7 percent to 20.30.

Fresh lockdowns in Europe hurt the reopening trade with airlines and cruise lines sharply lower.  United Airlines Holdings (UAL), American Airlines Group (AAL), Carnival (CCL) and Norwegian Cruise (NCLH) were sharply lower.  As such, the U.S. Global Jets ETF (JETS) dropped nearly 4 percent on the day but is up 16 percent YTD, outperformed the S&P.  Now the question is what’s next?  Below is an update look at a trade in JETS. 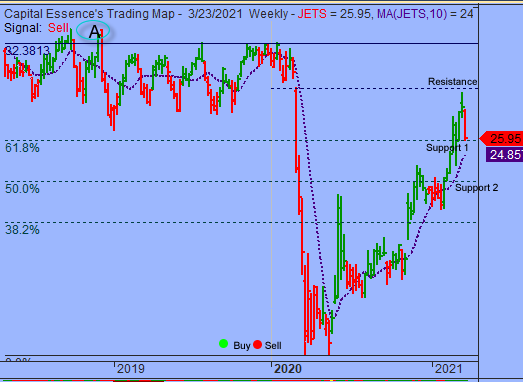 Our “U.S. Market Trading Map” painted JETS bars in red (sell) – see area ‘A’ in the chart.  JETS has been on a tear in days after the December correction found support near the 2020 rising trend line.  The February rally tested resistance at the early 2020 breakdown point.  This week’s bearish reversal signal suggested that the resistance would hold. Over the next few days, it’d be important to monitor the retreat and rebound behavior as the 25 zone is tested as support.  A close below that level on a weekly closing basis will bring the 23 zone into view.

JETS has resistance near 29.  Short-term traders could use that level as the logical level to measure risk against. 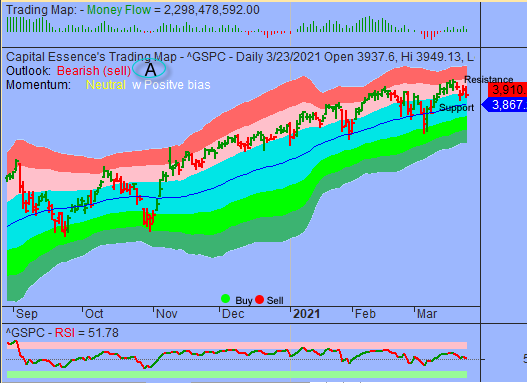 S&P moved down to test support at the important sentiment 3900 zone after recent rally attempt ran out of steam near last week’s bearish breakaway gap. Money Flow flashed a bearish signal as it printed a lower high as prices ascended, suggesting that the bears were more aggressive as prices fell than the bulls were as prices climbed.  This is a negative development, indicating that most of the potential buyers at this level had already placed their bets.  The next batch of buyers typically sits at a much lower level.  While more backing and filling would not be a surprise, a failure to hold above 3900 would see a pickup in volatility and a test of the more important support at the 3860-3750 zone, based on the trend channel moving average and the upper boundary of the green band, should be expected.

Last week’s bearish breakaway gap, around 3950, represents key resistance.  There is no reason to turn particular bullish until this level is eclipsed.

In summary, the big picture remains the same. There is an orderly pullback consolidation, which represents digestion period.  However, the fact that buying pressure deteriorated as the S&P tested key price level suggested that most of the potential buyers at this level had already placed their bets.  The next batch of buyers typically sits at a much lower level.  With this in mind we’d look to reduce exposure into short-term intraday bounces.