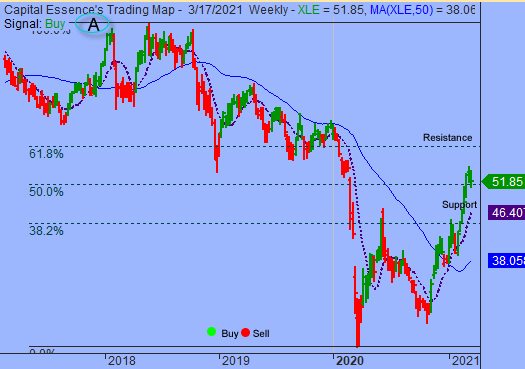 We’ve noted in the previous Market Outlook that: “overbought conditions have returned on an intraday basis but momentum remains supportive so downside risk could be limited. It is possible that S&P could continue to drift higher as trading sentiment remains strong.  As for strategy, buying into short-term dips remains the most profitable strategy.”  As anticipated, S&P hit records Wednesday, rose 0.30 percent to 3,974.71, riding a sharp intraday reversal in tech stocks after bond yields were given their marching orders as the Federal Reserve said it was no hurry to lift rates despite signs the recovery is taking shape.  The Dow Jones Industrial Average added 0.58 percent to 33,015.397.  The Nasdaq Composite was up 0.40 percent, but had been down more than 1 percent intraday.  The CBOE Volatility Index (VIX), widely considered the best gauge of fear in the market, fell nearly 3 percent to 19.23.

Energy jumped as oil prices pared some losses on data showing a smaller-than-expected build in U.S. crude inventories and an unexpected climb in product stockpiles. Gasoline inventories rose 472,000 as the recent lull in refinery activity appears to be on the road to normalizing.  As such, the Energy Select Sector SPDR Fund (XLE) rose 0.78 percent on the day and is up about 37 percent YTD, outperformed the S&P.  Now the question is what’s next?  Below is an update look at a trade in XLE.

Our “U.S. Market Trading Map” painted XLE bars in green (buy) – see area ‘A’ in the chart.  XLE moved down to test support at the 50% Fibonacci retracement, near 50, after climbed above that level in early March.  The overall technical backdrop remains supportive of further advance.  With this in mind, we’d look to increase exposure into any short-term dips toward the 2020 rising trend line, currently just below 47, in anticipate a rapid rally toward the 58 zone, or the 61.8% Fibonacci retracement.

XLE has support near 47.  Short-term traders could use that level as the logical level to measure risk against. 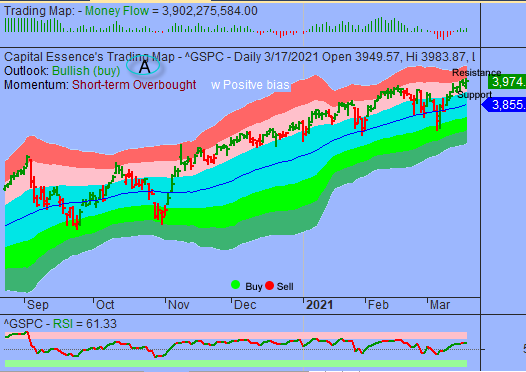 Once again, the S&P moved up to test resistance at the lower boundary of the red band after recent pullback was met with a new wave of buying interest.  Money Flow measure trended higher from above the zero line, indicating a positive net demand for stocks.  Momentum indicator shifted higher from near overbought but the indictor is fast approaching the level that has been successfully in repelling price action in the past.  This might put a lid on the upside.

Right now the most important thing to watch is trading behavior as the 4000 zone is tested as resistance.  That level roughly corresponds with the lower boundary of the red band.  The normal behavior for the S&P has been to consolidate and retreated almost every time it traded above that level so there is a high probability that a significant consolidation pattern will again develop in this area.

In summary, there is currently a test of resistance at S&P\s 4000 zone.  While more backing and filling would not be a surprise, the overall technical backdrop remains positive. So it seems to us that the path with least resistance remains higher as long as S&P holds above 3900.