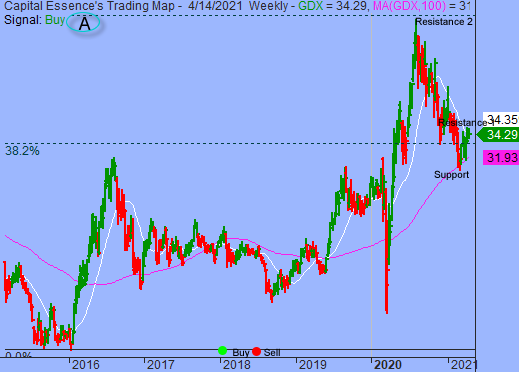 We’ve noted in the previous Market Outlook that: “although overbought condition is keeping buyers at bay, S&P’s 4200 continues to act as price magnet.  Short-term traders can anticipate increase short-term volatility with rapid up and down moves in the market.”  As anticipated, S&P closed lower Wednesday, fell 0.4 percent after hitting a record intraday high of 4,151.97 as the Fed’s Beige Book report stoked inflation jitters somewhat offsetting intraday optimism following earnings from Wall Street banks that topped estimates.  The Dow Jones Industrial Average rose 0.16 percent and the Nasdaq Composite was off about 1 percent.  The CBOE Volatility Index (VIX), widely considered the best gauge of fear in the market, rose more than 2 percent to 16.99.

Gold fell on Wednesday after jumped as much as 0.9% on Tuesday after U.S. consumer prices rose by the most in more than 8-1/2 years in March, kicking off what is expected to be a brief period of higher inflation.  U.S. gold futures settled down 0.6 percent at $1,736.30.  As such, the VanEck Vectors Gold Miners ETF (GDX) fell 0.75 percent on the day and is down nearly 5 percent YTD, underperformed the S&P.  Now the question is what’s next?  Below is an update look at a trade in GDX. 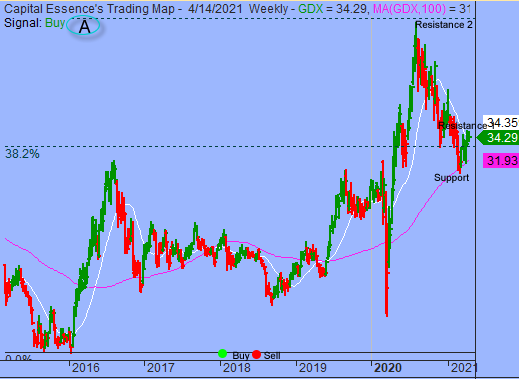 Our “U.S. Market Trading Map” painted GDX bars in green (buy) – see area ‘A’ in the chart. Over the past few weeks, GDX has been trending higher after August 2020 correction found support near the 2-year moving average.  The March rally is testing resistance at the late 2020 falling trend line, around 35.  The overall technical backdrop remains supportive of further advance.  So it seems to us that the rally could carry GDX above the 35 zone and up to the next level of resistance at the 45 zone, or the August high.

GDX has support near 32.  Short-term traders could use that level as the logical level to measure risk against. 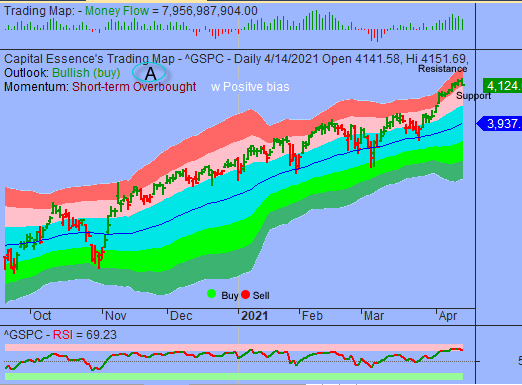 S&P moved down to test support at the lower boundary of the red band after the early rally attempt was met with a new wave of selling interest.  Market internal has been weakened but downside momentum does not appear strong enough to generate a widespread breakdown.  Additionally, Money Flow measure held firmly above the zero line, indicating a positive net demand for stocks.  This could help putting a short-term floor under the market.

Over the next few days, the most important thing to look for is trading behaviors as 4100 is tested as support. A close below that level signifies a bearish reversal and a retest of the more important support near the 4000 zone should be expected.

While more backing and filling would not be a surprise, if the S&P could hold above 4100 then a move above 4200 would be easier to achieve.

In summary, our near-term work on price pattern and momentum suggested strongly that the S&P is in a midst short-term pullback correction phase that could last about 5 to 10 trading sessions.  While the near-term technical bias is skewed toward further weakness, the bulls should not get into any serious trouble as long as the index holds above 4100.