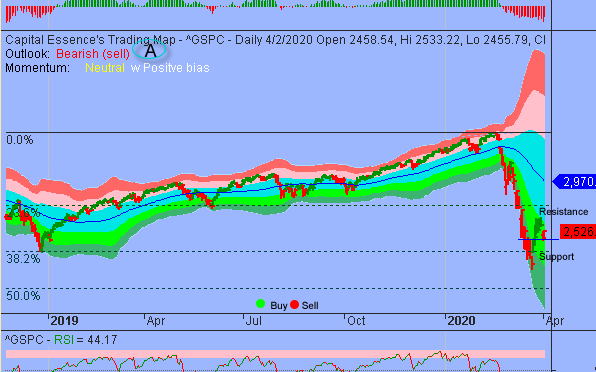 Stocks rose Thursday as oil’s biggest one-day rally on record eased concern about financial and job losses in the energy sector.  The Dow Jones Industrial Average rose 2.2 percent to 21,413.44. The S&P added 2.3 percent to 2,526.90 while the Nasdaq Composite climbed 1.7 percent to 7,487.31.  The CBOE Volatility Index (VIX), widely considered the best gauge of fear in the market, fell more than 10 percent to 50.91.

Oil prices settled up 24 percent, their highest ever percentage gain, pushing energy stocks and the broader market higher, as Donald Trump talked up the potential of a Russia-Saudi oil-production-cut agreement.  The S&P energy sector rallied 9.1 percent.  As such, the Energy Select Sector SPDR Fund (XLE) jumped 9.16 percent on the day but is down about 50 percent YTD, underperformed the S&P.  Now the question is what’s next?  Below is an update look at a trade in XLE. 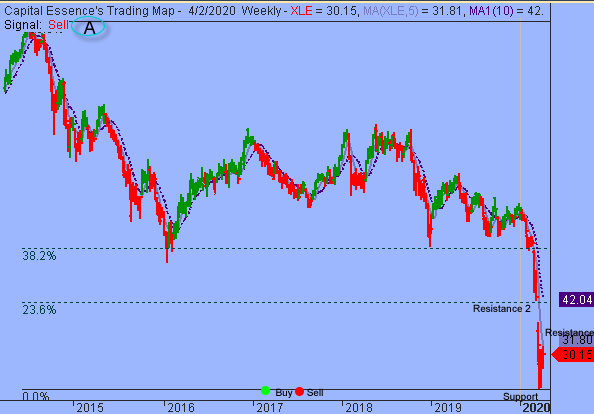 Our “U.S. Market Trading Map” painted XLE bars in red (sell) – see area ‘A’ in the chart.  XLE is in free fall mode after the early 2020 selloff pushed the ETF below the closely watch 50 zone. That level was tested several times over the past years.  The late February massive selloff pushed XLE slightly below 23, the lowest level going back to 2003.  This week’s rally suggested that XLE is undergoing an oversold relief bounce that might take the ETF up to 42.  A close above 32 will confirm this.  Traders however, must be mindful that the overall technical backdrop remains negative so rallies are counter-trend bounce and should be short-lived.

XLE has support near 23.  Short-term traders could use that level as the logical level to measure risk against. 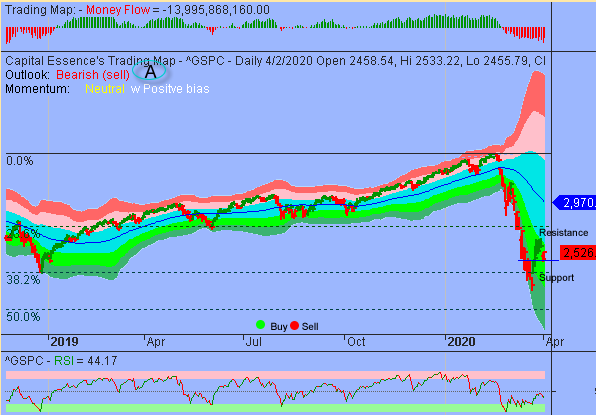 S&P bounced off support at the late March breakout point.  This is a short-term positive development but given the damages done over the past weeks, we wouldn’t read too much into Thursday’s trading action.  The rally has proved nothing as far as its staying power or as a possible trend reversal.

For now, 2470 represents key support.  A consecutive close below 2470 will confirm Wednesday’s bearish signal and a retest of the March low, just below 2200, should be expected.

On the upside, 2650 represents key overhead resistance.  If the market is going to find bottom in the near term, we want to see the S&P stabilizes and climbs above 2650.  Staying below that level heralds more losses.  With that said, a weekly close above 2650 will turn the medium-term trend up and trigger acceleration toward the 2900 zone.

In summary, it seems to us that S&P found some footing near the late March breakout point.  This is a positive development that could allow for at least another rally attempt in the coming days.  However, given the damages done over the past weeks, expect continue near-term volatility as the bottoming process unfolds.