We’ve noted in the previous Market Outlook that: “so far Tuesday’s oversold rally has proved nothing as far as its staying power or as a possible trend reversal.  While there is a high probability that the late-day rally will momentum, given looming resistance near 2750-2765, there is no reason to turn particular bullish until this zone is eclipsed.  With this in mind, we’d consider taking down exposure into additional strength.”  As anticipated, stocks traded sharply higher in early Wednesday session that saw the S&P traded as high as 2736 before sellers stepped in and pushed prices off the intraday highs.  For the day, the S&P gained 1.1 percent to 2,711.68.  The Dow Jones Industrial Average rose 0.97 percent to 25,115.76. The Nasdaq Composite advanced 2 percent to 7,305.90.  The CBOE Volatility Index (VIX), widely considered the best gauge of fear in the market, fell more than 9 percent to 21.23.

Benefited from a slight steepening of the yield curve, with the 2-yr yield increasing four basis points to 2.88% and the 10-yr yield rising five basis points to 3.16%, the rate-sensitive and heavily-weighted financials sector outperformed the broader market with a gain of 1.4%.  After surging 20 percent in 2017, the Financial Select Sector SPDR ETF (XLF) tumbled nearly 6 YTD, underperformed the S&P by a wide margin.  Now the question is whether recent pullback is a pause that refreshes or it’s a beginning of something worse?  Below is an update look at a trade in XLF. 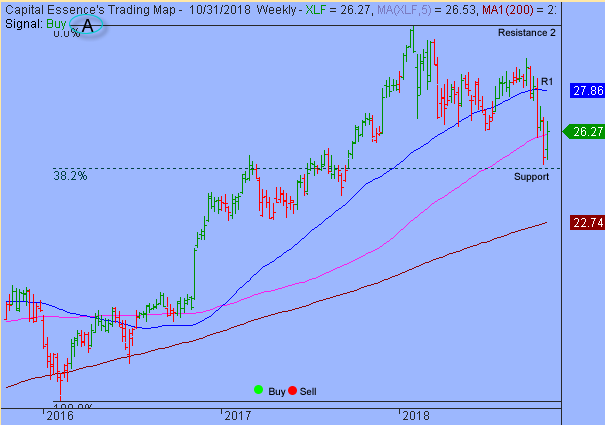 Our “U.S. Market Trading Map” painted XLF bars in green (buy) – see area ‘A’ in the chart. The first dominant feature on the chart is the rising trend line starting in early 2016.  The second dominant feature of the chart is the downward trend since early 2018, which represented the digestion period.  The late September selloff broke several key technical supports.  The correction tested and respected support at the 38.2% Fibonacci retracement of the 2016 upswing.  This week’s bullish reversal pushed XLF above the 2-year moving average.   This level was significant when XLF fell below it in late October, signify a bullish reversal.  Right now follow-through is the key.  A close above 26.20 on a weekly basis will confirm the bullish signal and trigger acceleration toward the 1-year moving average, just below 28.  A close above that level will bring the early 2018 highs back into view.

XLF has support near 24.80.  Short-term traders could use that level as the logical level to measure risk against 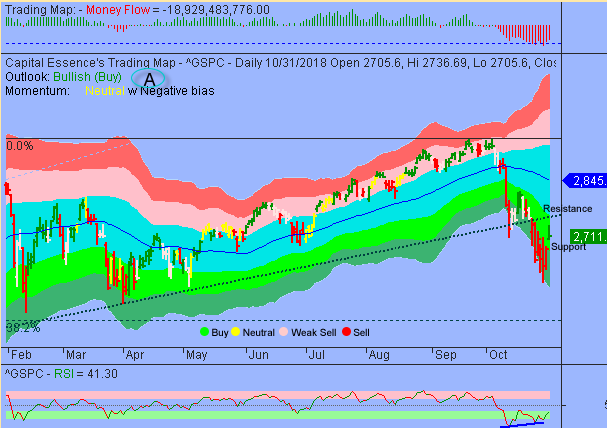 As expected, Wednesday’s oversold relief rally pushed the S&P up against the 2016 rising trend line.  This level was significant when the index fell below it last week.  Technically speaking, the S&P is now at a key juncture.  It is testing formidable resistance from below.

In accordance to the Japanese candlestick pattern recognition, Wednesday’s bearish topping tail, or shooting star candlestick, is a clear indication of supply overwhelming demand.  Perhaps a negative Money Flow measure is the best illustration of the bears’ case.  The indicator had been diverged from price action over the past months.  The S&P broke out to new highs in September while the indicator fell below the zero line, indicating a negative net demand for stocks. Technically speaking, this trading pattern exhibits characteristics of a distribution phase, the period in which smart money sell (distribute) their positions.

Wednesday’s breakaway gap, around 2680, represents key support.  A failure to hold above this level will bring last week’s low, around 2600, into view.

As for resistance, there’s a strong band of resistance between 2725 and 2765.  There is a no reason to turn particularly bullish until this zone is eclipsed.

In summary, momentum has been strengthened as S&P moved up to test key overhead resistance but does not appear strong enough to generate widespread breakouts.  While there is a high probability that the late-day selloff will momentum, an undercut below the 2680 is needed before there is any real prospect of a change in the short-term uptrend pressure.  Again, expecting further whipsaws and intimidating times ahead.