We’ve noted in the previous Market Outlook that: “S&P cleared key resistances, breaking out to new high.  Consecutive close above 2916 would signify a breakout and bullish reversal, supporting upside follow-through in the weeks ahead.  However, market is short-term overbought following recent advance. There could be a sell-off in the offing but it would be shallow if so.”  As anticipated, S&P closed slightly lower Friday as weakness in the large-cap tech stocks dragged the market lower.  For the day, the bench mark gauge closed around the flat line at 2,929.67, the tech-heavy NASDAQ lost 0.5% while the Dow Jones Industrial Average climbed 0.3 percent to 26,743.50.  The CBOE Volatility Index (VIX), widely considered the best gauge of fear in the market fell over 1 percent to close at 11.68.

Homebuilders were under selling pressure Friday after J.P. Morgan downgraded five homebuilder stocks, said housing recovery will be “tepid.”  After surging more than 30 percent in 2017, the SPDR S&P Homebuilders ETF (XHB) fell 0.5 percent to 39.91, down nearly 10 percent YTD while the S&P rose nearly 10 over the same period.  Now the question is whether recent pullback is a pause that refreshes or it’s a beginning of something worse?  Below is an update look at a trade in XHB. 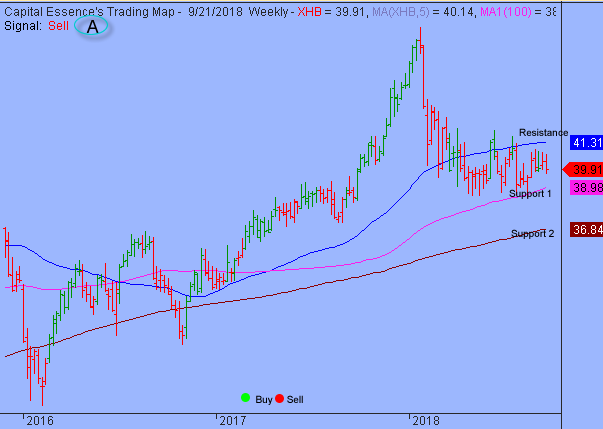 Our “U.S. Market Trading Map” painted XHB bars in red (sell) – see area ‘A’ in the chart.  The first dominant feature on the chart is the rising trend line starting in early 2016.  The second dominant feature of the chart is the downward trend since early 2018.  The downswing tested and held support at the 2-year moving average.  In fact, trading action over the past months represents an orderly low level consolidation in the aftermath of the early February massive selloff.  This is a negative development, suggesting that XHB might have to move to a much lower level to attract new buyers as soon as it works off extreme oversold conditions.  Over the next few weeks, trader should monitor trading behavior near 40, or the 2-year moving average.  A close below that level will trigger a new downswing with downside target near 37, based on the 4-year moving average.

XHB has resistance just above 41.  Short-term traders could use that level as the logical level to measure risk against. 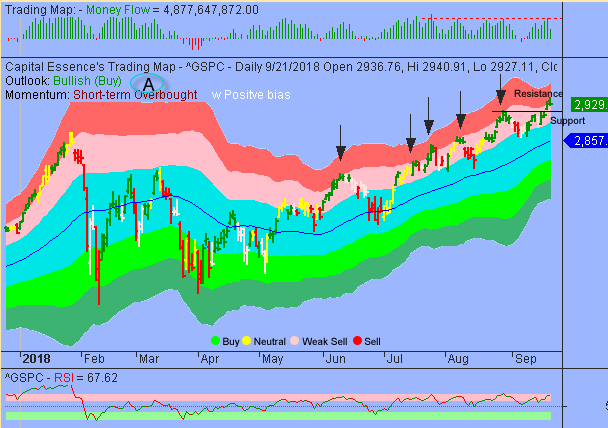 S&P retreated after Friday early rally attempt ran out of steam near the lower boundary of the red band.  That level was significant in charting terms.  It was tested several times over the past months.  Momentum indicator shifted lower from overbought zone, suggesting some short-term weakness likely.  So it should not be surprising to see some kind of a pullback, the way we had in June, July and August, prior to the new upswing.

In summary, daily chart of the S&P has shown signs that upside momentum is waning as the index shifted to overbought consolidation phase.  Although seemingly vulnerable to further short-term weakness, the overall technical backdrop remains positive so pullback should be shallowed and quick.