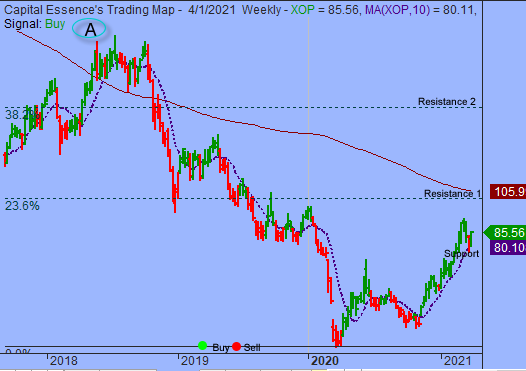 We’ve noted in the previous Market Outlook that: “S&P inches toward new highs Wednesday, signified resumption of the multi-month upswing.  Overbought conditions have returned on an intraday basis but momentum remains supportive so downside risk could be limited. It is possible that S&P could continue to drift higher as trading sentiment remains strong.  With this in mind, we’d look to reduce exposure into overbought strength, which might take the S&P closer to 4000 before a significant pullback unfolds.”  As anticipated, S&P crossed the 4,000 threshold for the first time Thursday as Wall Street built on a solid March following the rollout of President Joe Biden’s infrastructure plan. For the day, the broad equity benchmark rose 1.2 percent to 4,019.87. The Dow Jones Industrial Average climbed 0.5 percent to 33,153.21. The tech-heavy Nasdaq Composite jumped 1.8 percent to 13,480.11.  The CBOE Volatility Index (VIX), widely considered the best gauge of fear in the market, fell more than 1 percent to 19.40.

Financials and energy were among the biggest gainers for value, with the latter aided by rising oil prices even as major oil producers agreed to raise output.  Marathon Oil, Diamondback Energy and Devon Energy were among the biggest gainers for the sector.  As such, the SPDR S&P Oil & Gas Exploration & Production ETF (XOP) jumped 5.19 percent on the day and is up more than 46 percent YTD, outperformed the S&P.  Now the question is what’s next?  Below is an update look at a trade in XOP.

Our “U.S. Market Trading Map” painted XOP bars in green (buy) – see area ‘A’ in the chart.  Over the past few weeks, XOP has been trending lower in short-term corrective mode after the early 2021 rally ran out of steam just above 90.  The correction tested support at the late 2020 rising trend line. Last week’s bullish reversal suggested that support would hold.  The overall technical backdrop remains supportive of further advance.  Right now, the most important thing to watch is trading behaviors as the March high, just above 92, is tested as resistance.  A close above that level signifies a bullish breakout and trigger acceleration toward the 23.6% Fibonacci extension, around 105.

XOP has support near 80.  Short-term traders could use that level as the logical level to measure risk against. 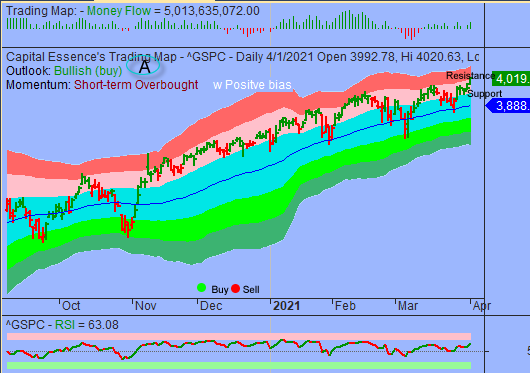 As expected, the S&P moved up to test resistance at the red band after recent pullback found support near the lower boundary of the pink band. Money Flow measure flashed a weak bullish signal, the indicator printed a lower high as prices broke out to new high, suggesting that the bears are more aggressive as prices off than the bulls were as prices ascended. Market is short-term overbought, following last week’s rally. This will give the bulls more pressure than they have already had.

In summary, the fact that the S&P is overbought as it approached key price level that had been successful in repelling price action in the past suggested that upside gains could be limited.  As for strategy, traders should consider buying into market dips rather than chasing breakouts.