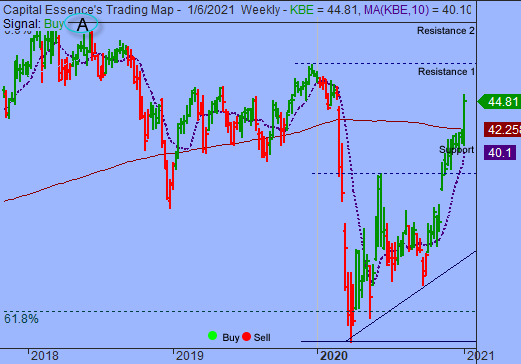 We’ve noted in the previous Market Outlook that: “S&P developed a high volatility with fast up and down moves between the lower boundary of the red band and the trend channel moving average.  While market seems vulnerable to some downside retracement over the short-term, we believe selloff would be shallow and quick because sideline money will find its way into the market.  As for strategy, buying into short-term market dips remains the most profitable strategy.”  As anticipated, S&P closed higher Wednesday, up 0.57 percent to 3,748.14, as violent protests at Capitol Hill to stop the confirmation of President-elect Joe Biden’s victory was offset by a wave of optimism that more stimulus is on the way as Democrats won the Georgia runoff elections to take control of the Senate.  The Dow Jones Industrial Average climbed 1.4 percent to 30,829.40.  The Nasdaq Composite underperformed, closed lower by 0.6 percent.  The CBOE Volatility Index (VIX), widely considered the best gauge of fear in the market, fell more than 1 percent to 25.07.

Financials led the broader market higher, with banking stocks in the ascendency, driven by a jump in Treasury yields as the United States 10-Year rose above 1 percent for the first time since March.  Higher yields tend to boost the net interest income banks earn on their loan products.  Wells Fargo (WFC), Bank of America (BAC) rallied 7 percent and 6 percent respectively, while JPMorgan (JPM) was up 5%.  As such, the SPDR S&P Bank ETF (KBE) soared 6.9 percent on the day and more than 7 percent YTD, outperformed the S&P.  Now the question is what’s next?  Below is an update look at a trade in KBE.

Our “U.S. Market Trading Map” painted KBE bars in green (buy) – see area ‘A’ in the chart.  KBE has been on a tear in recent days after the late August correction found support near the March rising trend line.  This week’s rally had helped push the ETF above the 4-year moving average, a key technical level based on moving averages, signifies a bullish breakout and upside reversal.  The overall technical backdrop remains supportive of further advance.  This is a positive development, increased the probability for a rapid advance toward the 48-52 zone, or the late 2019 and 2018 highs. A close above 42.25 on a weekly closing basis will confirm this.

KBE has support near 40.  Short-term traders could use that level as the logical level to measure risk against. 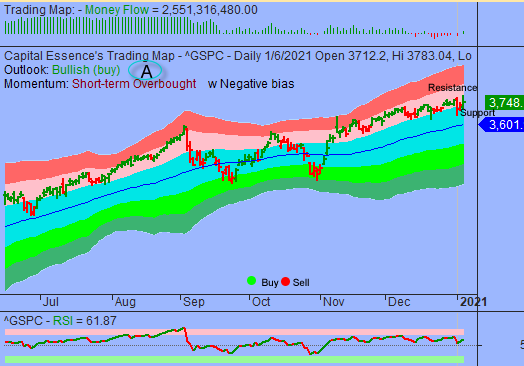 S&P broke out to new high after recent pullback found support near the lower boundary of the pink band.  Money Flow measure climbed above the zero line, indicating a positive net demand for stocks.  Momentum has been strengthened but the return of overbought conditions on an intraday basis will put a cap on the upside.  With this in mind, we’d look to reduce exposure into overbought strength, which might take the S&P closer to 3800 before a significant pullback unfolds.

For now, 3700 is the line in the sand.  This level was tested several times over the past weeks.  This history indicated an important role in terms of support.  We’d turn particular bearish if the index closes twice below the 3700.

A close below 3700 has measured move to around 3600, based on the trend channel moving average.  That’s about 4-5 percent pullback, the way we’ve had over the past few months.  So it would be a normal, probably refreshing activity to have come down.

In summary, S&P broke out to new high Wednesday, signified resumption of the multi-month upswing.  Overbought conditions have returned on an intraday basis but momentum remains supportive so downside risk could be limited. It is possible that S&P could continue to drift higher as trading sentiment remains strong.  With this in mind, we’d look to reduce exposure into overbought strength, which might take the S&P closer to 3800 before a significant pullback unfolds.