We’ve noted in the previous Market Outlook that: “while last week’s massive selloff looked and felt like a short-term capitulation, near-term technical backdrops and monetary conditions has been deteriorating suggesting that rallies are counter trend and will be sold. Overall, expecting further whipsaws and intimidating times ahead.”  As anticipated, stocks traded sharply higher in early Monday session that saw the S&P gained more than 1 percent before sellers stepped in and pushed prices lower.  For the day, the bench mark gauge fell 0.7 percent to close at 2,641.25.  The Dow fell 0.99 percent to 24,442.92.  The Nasdaq Composite fell 1.6 percent to 7,050.29.  The CBOE Volatility Index (VIX), widely considered the best gauge of fear in the market, rose 2.2 percent to 24.70.

The heavily-weighted financials was a notable standout in Monday, rose 0.9 percent.  The group, however, traded as high as 2.6% before trimming gains.  .  After surging 20 percent in 2017, the Financial Select Sector SPDR ETF (XLF) tumbled more than 8 percent YTD, underperformed the S&P by a wide margin.  Now the question is whether recent pullback is a pause that refreshes or it’s a beginning of something worse?  Below is an update look at a trade in XLF. 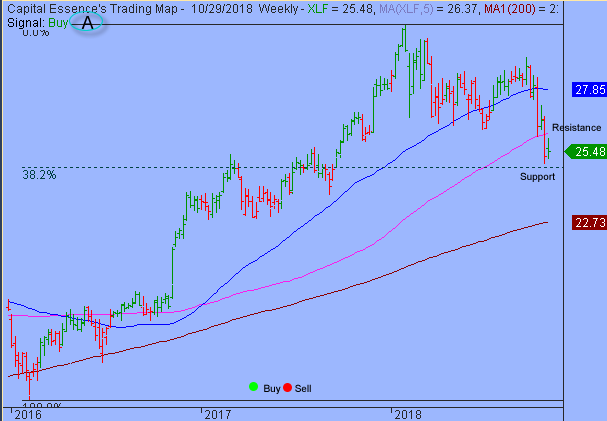 Our “U.S. Market Trading Map” painted XLF bars in red (sell) – see area ‘A’ in the chart. The first dominant feature on the chart is the rising trend line starting in early 2016.  The second dominant feature of the chart is the downtrend since early 2018, which represented the digestion period.  The late September selloff pushed the ETF down to the 38.2% Fibonacci retracement, a key technical level.  This week’s rebound indicated that the support would hold, at least for the time being.  Nevertheless, a close above the 2-yearm moving average is required to neglect the short-term downward trend pressure.  A close above 26.50 on a weekly basis has measured move to around 28.

XLF has support near 24.80.  Short-term traders could use that level as the logical level to measure risk against 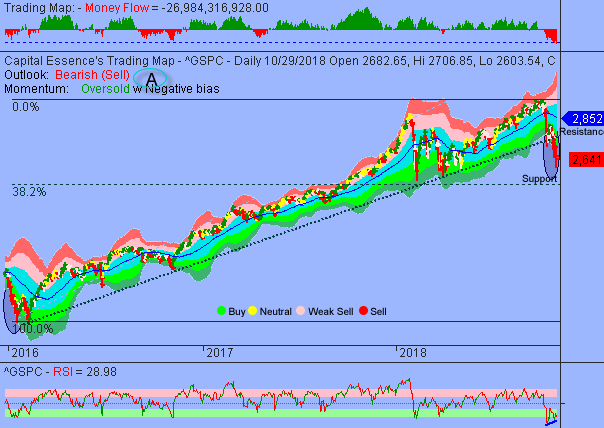 Once again, broke below the bottom of its short-term trading range after the early rally attempt ran out of steam near the important sentiment 2700 mark.  While it’s uncommon for the S&P to break below this technical level, such a move lower is often followed by a quick snap back.   In fact, current technical setup is similar to the early 2016 in which the S&P broke through the bottom of its short-term trading range on a daily basis, only to bounce back up.  Nevertheless, Money Flow measure is much weaker now.  The indicator is at the lowest level since 2012.  This is a negative development, suggesting that rallies are counter trend and should be sold.

Longer term, the uptrend that began in 2016 is technically broken.  Technical backdrops and monetary conditions has been deteriorating.  A close above 2767 is required before there is any real prospect of a change in the short-term downward trend pressure.

In summary, Monday’s late day rally together with the fact that market is extremely oversold following recent selloff warns of potential trend shifts.  Nevertheless, overall technical backdrops and monetary conditions has been deteriorating so we’d consider taking down exposure into oversold rebound, which we think could take S&P closer to 2750 before the big reversal kicks in.