We’ve noted in the previous Market Outlook that: “the bullish reversal doji candlestick pattern in the S&P together with the short-term oversold condition suggested strongly that the market is at or very close to a significant near-term low.  So it wouldn’t surprise us to see at least an attempt to rally over in the coming days.”  As anticipated, the S&P swung between positive and negative territory throughout the day amid concerns about global growth and rising interest rates.  For the day, the bench mark gauge dipped 0.1 percent to 2,880.34.  The Dow Jones Industrial Average fell 0.21 percent to 26,430.57. The Nasdaq Composite rose slightly to 7,738.02.  The CBOE Volatility Index (VIX), widely considered the best gauge of fear in the market, rose more than 1 percent to close at 15.95.

Homebuilders sold off sharply Tuesday following a downbeat report from DR Horton and fears rising interest rates could stifle home-buying activity at a time when higher construction costs continue to keep a lid on the supply of homes.  The SPDR S&P Homebuilders ETF (XHB) was down 2.87 percent on the day and is off more than 18% this year, underperformed the S&P by a wide margin.  Now the question is whether recent pullback is a pause that refreshes or it’s a beginning of something worse?  Below is an update look at a trade in XHB. 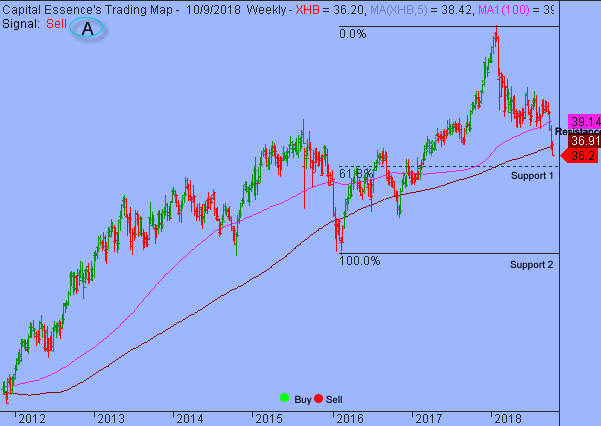 Our “U.S. Market Trading Map” painted XHB bars in red (sell) – see area ‘A’ in the chart. Over the past few weeks, XHB has been trending lower after the multi-month sideways trading pattern, which represented the digestion period in the aftermath of the early 2018 massive selloff resolved itself into a new downswing.  This week decline pushed the ETF below the 4-year moving average, a key technical level.  That level was tested several times over the past years.  Below it, a more significant support lies at the 61.8% Fibonacci retracement, just above 35.  A close below that level will confirm the bearish signal and a retest of the 2016 low, just below 28, should be expected.

XHB has resistance near 39.  Short-term traders could use that level as the logical level to measure risk against 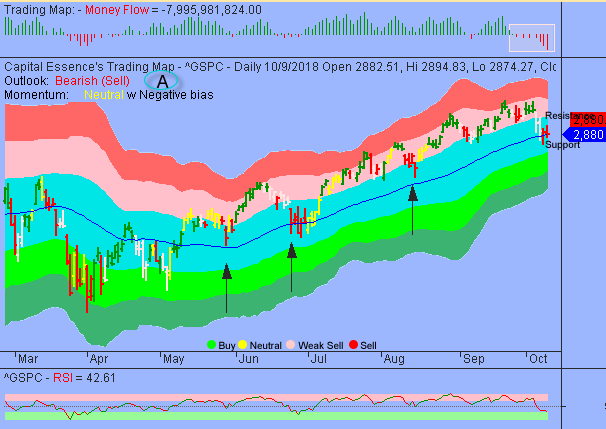 S&P continues basing sideways near the trend channel moving average.  That level is significant in charting terms.  It provided support and acted as launching pad since the index reached an interim low in summer 2018.  Money Flow measure trended lower from below the zero line.  The indicator is at the lowest level since summer 2017, indicating a negative net demand for stocks.  Momentum has been weakened but it is much closer to oversold than overbought zone.  These elements suggested that the index might have to move to a much lower level to attract new buyers as soon as market works off oversold conditions.  The trend channel moving average, currently at 2880, is the line in the sand.  A close below that level on a weekly basis has measured move to 2830-2820.

In summary, market is in holding pattern as traders are watching to see whether or not the S&P can hold above 2880.  Money Flow measure and momentum had been deteriorated, suggesting that the support might not hold for long.  A failure to hold above key price level means that long-term buying pressure has finally been exhausted.  On balance, we remain near term neutral/negative for S&P as we believe market vulnerable to some downside retracement over the short-to-intermediate term.