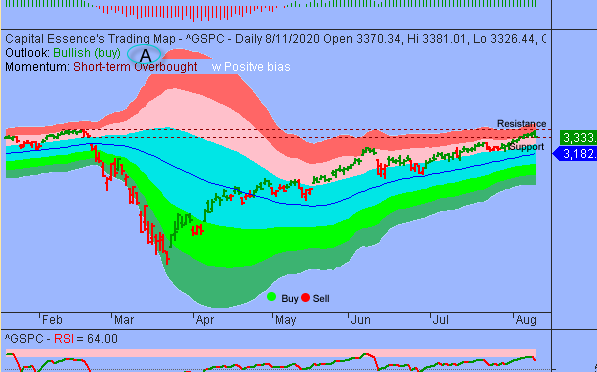 We’ve noted in the previous Market Outlook that: “market is overbought as S&P moved up to test resistance at the late February’s bearish breakaway gap.  Momentum remains supportive over the short to medium term and Money Flow measure is above the zero line, indicating a positive net demand for stocks.  This certainly would argue that the path with least resistance remains to the upside.  While some backing and filling would not be a surprise, the bulls will continue to have the benefit of the doubts as long as S&P holds above 3300.”  As anticipated, S&P traded higher in early Tuesday session, up as much as 0.6 percent and traded within half a percent of its February 19 intraday record of 3,393.52, before sellers stepped in and pushed prices lower.  For the day, the bench mark gauge fell 0.8 percent to 3,333.69.  The Dow Jones Industrial Average gave up 0.4 percent to 27,686.91.  The Nasdaq Composite lagged, falling 1.7 percent to 10,782.82.  The CBOE Volatility Index (VIX), widely considered the best gauge of fear in the market, surged more than 8 percent to 24.03.

Gold plunged more than 5 percent Tuesday as demand for safe-haven fell amid news about a Russia-made Covid-19 vaccine lifted investor bets that drugmakers could ready a cure sooner rather than later.  Spot gold tumbled 5.2 percent to $1,921.50 per ounce, retreating sharply from Friday’s record high of $2,072.50 and was set for its worst day since June 2013. U.S. gold futures settled down 4.6 percent at $1,946.30.  As such, the VanEck Vectors Gold Miners ETF (GDX) dropped 7.9 percent on the day but is up more than 33 percent YTD, outperformed the S&P.  Now the question is what’s next?  Below is an update look at a trade in GDX. 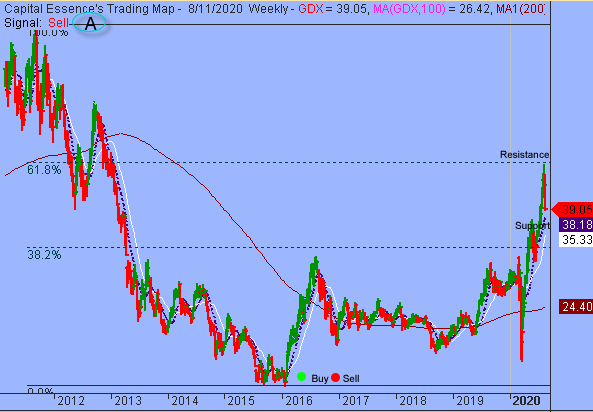 Our “U.S. Market Trading Map” painted GDX bars in red (sell) – see area ‘A’ in the chart.  GDX has been on a tear in recent weeks after breaking out above the 38.2% Fibonacci retracement in late June.  The July rally pushed the ETF up against the 61.8% Fibonacci retracement.  This week’s massive selloff suggested that the resistance would hold.  Over the next few days, traders should monitor trading behaviors as the 38 zone is tested as support.  A failure to hold above that level will bring the 35 zone into view.

GDX has resistance just below 46.  Short-term traders could use that level as the logical level to measure risk against. 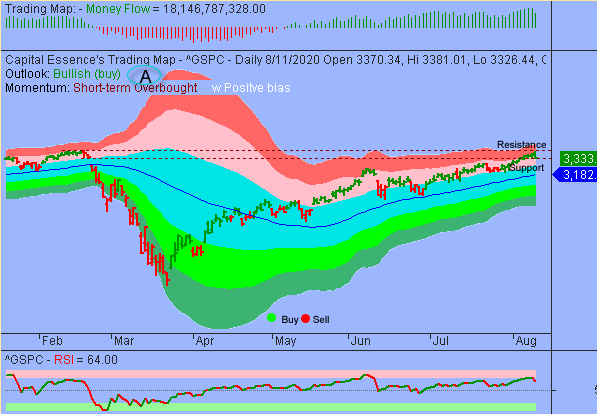 S&P moved up to test resistance at the prior high set in late February, just below the important sentiment 3400 zone, after the late July pulled back found support near the 3200 zone.  In accordance to the Japanese candlestick pattern recognition, Tuesday’s massive bearish engulfing bar is a clear indication of supply overwhelming demand.  Momentum indicator shifted lower from overbought zone, another sign that the rally might had come to an end.  These elements suggested that the index might have to move to a much lower level to attract new buyers.

While seemingly vulnerable to further short-term weakness, Money Flow measure still above the zero line, indicating a positive net demand for stocks. This could help putting a short-term floor under the market.  Traders should not be surprised to see a 2 to 10 sessions of consolidation and sideways trade.

In summary, an overbought pullback consolidation interrupted the late July impressive rally in the S&P.  Although seemingly vulnerable to further short-term weakness, the overall technical backdrop remains positive so sell-off should be shallow and quick because the sideline money will try to fight its way back into the market.