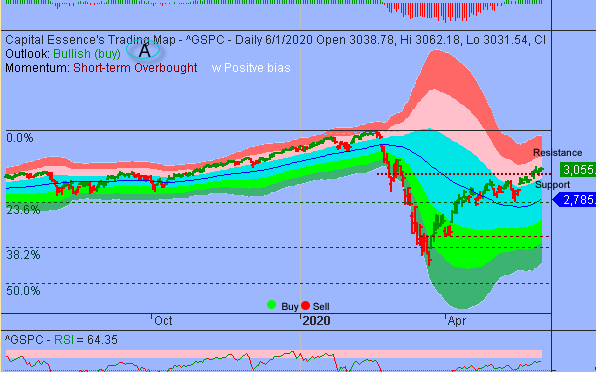 We’ve noted in the previous Market Outlook that: “after the May massive rally, stocks digested their gains in a consolidation phase that is giving way to a congestion in the S&P.  Support is strong in the 3000 area.  While more backing and filling would not be a surprise, a close below that level would see a massive pickup in volatility.”  As anticipated, stocks opened in the red but finished with gains on Monday as investors continued to bet that efforts to lift restrictions will spark a faster economic recovery in the back half of the year, even as protests over the death of George Floyd in Minneapolis last week threaten to slow reopening efforts.  The Dow Jones Industrial Average gained 0.4 percent to 25.475.02. The S&P 500 climbed 0.4 percent to 3,055.73 while the Nasdaq Composite added 0.7 percent to 9,552.05.  The CBOE Volatility Index (VIX), widely considered the best gauge of fear in the market, rose more than 2 percent to 28.23.

With optimism over a quicker economic recovery running high, cyclical sectors like financials and real estate continued to rack up gains. Vornado Realty Trust (VNO), Regency Centers (REG) and Kimco Realty (KIM) led Monday advance, all up more than 5 percent.  As such, the iShares U.S. Real Estate ETF (IYR) rose 2.31 percent on the day but is down about 15 percent YTD, underperformed the S&P.  Now the question is what’s next?  Below is an update look at a trade in IYR. 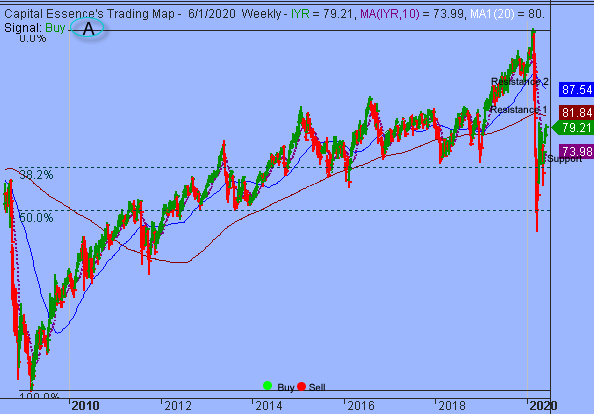 Our “U.S. Market Trading Map” painted IYR bars in green (buy) – see area ‘A’ in the chart. IYR has been on a tear in recent weeks after the late February massive selloff found some solid footing near the 50% Fibonacci retracement of the 2009-2020 major upswing.  The late March rally pushed the ETF toward the closely watch 4-year moving average, just below 82.  That level is significant in charting terms.  a sustain advance above that level will trigger a major buy signal and trigger acceleration toward the more important resistance near the 87 zone, or that 1-year moving average.

IYR has support near 74.  Short-term traders could use that level as the logical level to measure risk against. 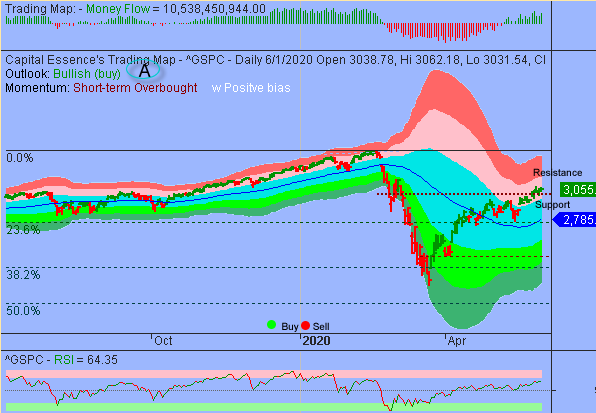 The big picture remains the same.  The S&P continues drifting higher after crossed above the closely watch 3000 mark last week.  As mentioned, the market is short-term overbought following recent advance.  While overbought condition is normal during a pro-long uptrend, it’s suggested that upside momentum might not sustain without at least a short-term breather.  Nevertheless, the overall technical backdrop remains supportive over the short to medium-term.  This could help putting a short-term floor under the market.  With this in mind we’d look to increase exposure into short-term market dips rather than chasing breakouts.

For now, 3000 is the line in the sand.  That level is significant in charting terms.  It must holds on a closing basis to prevent a test of the trend channel moving average, currently at 2785.

In summary, while the short-term overbought condition is keeping buyers at bay, the overall technical backdrop remains supportive so downside risk could be limited. It is possible that S&P could continue to drift higher as trading sentiment remains strong.  As for strategy, traders should look to increase exposure into short-term market dips rather than chasing breakouts.