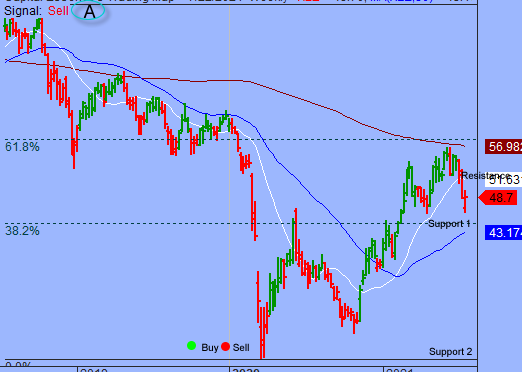 We’ve noted in the previous Market Outlook that: “our near-term work on price pattern and momentum suggested that the S&P is in a midst of a short-term oversold rebound.  The overall technical backdrop remains supportive of further advance. So it’s possible that the index could continue to drift higher as trading sentiment remains strong.  As for strategy, buying into short-term dips remains the most profitable strategy.” As anticipated, the S&P closed higher Thursday, after recovering intraday weakness supported by a bid up technology stocks amid falling Treasury yields following data showing a surprise rise in weekly jobless claims. For the day, the S&P rose 0.21 percent, the Dow Jones Industrial Average gained 0.07 percent and the Nasdaq was up 0.36 percent.  The CBOE Volatility Index (VIX) widely considered the best gauge of fear in the market, fell more than 1 percent to 17.69.

Energy was a source of pain for the broader market shrugging off rising oil prices amid weakness in Cabot Oil & Gas Corporation (COG), Baker Hughes Co (BKR) and Valero Energy Corporation (VLO).  As such, the Energy Select Sector SPDR Fund (XLE) fell 1.12 percent on the day but is up more than 28 percent YTD, outperformed the S&P.  Now the question is what’s next?  Below is an update look at a trade in XLE. 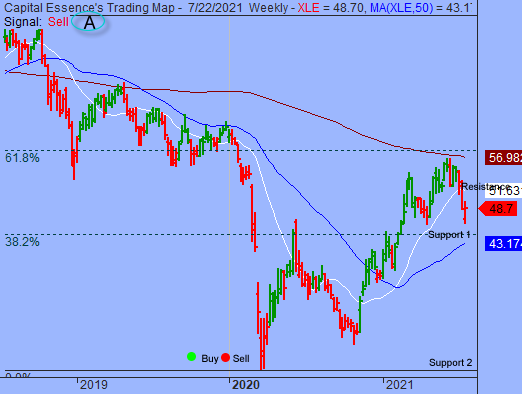 Our “U.S. Market Trading Map” painted XLE bars in red (sell) – see area ‘A’ in the chart.  Over the past few weeks, XLE has been trending lower after the late April rally ran out of steam near the 4-year falling moving average.  This week’s downside follow-through confirmed last week’s bearish breakout below the 2021 rising trend line.  The overall technical backdrop deteriorated following recent selloff.  Right now the most important thing to watch is the trading behavior as the 45 zone is tested as support.  That level roughly corresponds with the 38.2% Fibonacci retracement and the 1-year moving average.  A failure to hold above that level will bring the 2020 low, around 23, into view.

XLE has resistance around 51.60.  Short-term traders could use that level as the logical level to measure risk against. 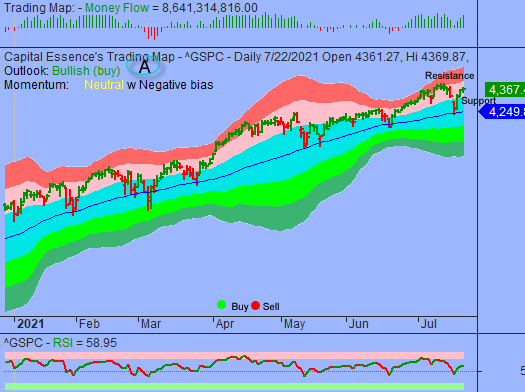 S&P continues drifting higher after climbed above the lower boundary of the pink band on Tuesday.  Money Flow measure is above the zero line, indicating a positive net demand for stock. This is a bullish development, suggesting that the path with least resistance remains to the upside.  Over the next few days, it’d be important to monitor trading behavior as the lower boundary of the red band, around 4400, is tested as resistance.  As mentioned, the normal behavior for the S&P has been to consolidate and retreated almost every time it traded above that level so there is a high probability that a significant consolidation pattern will again develop in this area.  With this in mind, we’d look to reduce exposure into overbought strength, which might take the S&P closer to 4400 before a significant pullback unfolds.

As for support, S&P must holds above 4330 on a closing basis to prevent a test of the more important support at the 4250 zone.

In summary, our near-term work on price pattern and momentum suggested that the S&P could continue to drift higher as trading sentiment remains strong.  As for strategy, we’d look to reduce exposure into overbought strength, which might take the S&P closer to 4400 before a significant pullback unfolds.