The Nasdaq tumbled for a second-day in a row Thursday, falling into correction territory as U.S. rates resumed their sharp acceleration after Federal Reserve Powell offered no clues on ramping-up bond purchases and shrugged off investor fears about rising inflation. The Nasdaq Composite fell 2.1 percent, the Dow Jones Industrial Average fell 1.3 percent. The S&P fell 1.28 percent.  The CBOE Volatility Index (VIX), widely considered the best gauge of fear in the market, jumped more than 7 percent to 28.57.

Semiconductor stocks, which have been one the best performing sectors over the past year, got hit hard Thursday, led by Micron Technology (MU) as chip shortage, which has forced semis to rein in production, compounded selling the sector.  Marvell (MRVL) slumped 12 percent after its warning that the chip shortage would hamper its output this year off-setting in-line first-quarter earnings.  As such, the iShares PHLX Semiconductor ETF (SOXX) fell 4.81 percent on the day but is up nearly 2 percent YTD, outperformed the S&P.  Now the question is what’s next?  Below is an update look at a trade in SOXX.

Our “U.S. Market Trading Map” painted SOXX bars in red (sell) – see area ‘A’ in the chart. Over the past few weeks, SOXX has been trending lower in a short-term corrective mode after the late 2020 rally ran out of steam near the 161.8% Fibonacci extension.  This week’s selloff pushed the ETF down to the 2020 rising trend line, the level that offered support since the ETF reached an interim low in early 2020.  This history indicated an important role in term of support.  A close below 380 on a weekly closing basis signifies a bearish breakout and a retest of the 127.2% Fibonacci extension, around 335, should be expected.

SOXX has resistance near 420.  Short-term traders could use that level as the logical level to measure risk against. 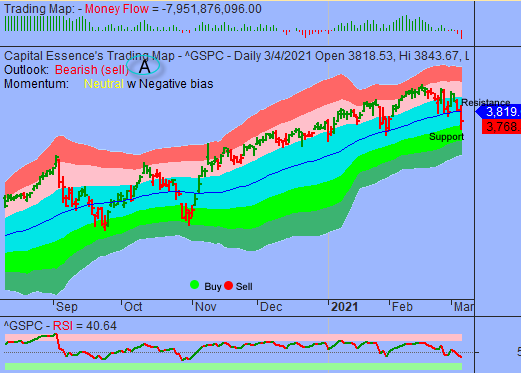 Key technical development in Thursday session was a close below the trend channel moving average. Money Flow measure is at the lowest level going back to late 2020, suggesting that the bears were more aggressive as prices dropped than the bulls were as pieces ascending. Momentum indicator trended lower but is fast approaching oversold zone, the level that has been successfully in repelling price actions in the past months.

Thursday selloff pushed the S&P down to the green band.  The market has historically developed minor support near that level so it should not be surprising to see the S&P regroups and rebounds from near 3700.

In summary, Thursday’s selloff pushed the index down to the green band.  The market has historically developed minor support near that level so it should not be surprising to see at least an attempt to rally in the coming days.  Nonetheless, recent trading actions suggested strongly that the S&P is in transition from aggressively bullish to aggressively bearish so rebounds are counter trend and should be sold.