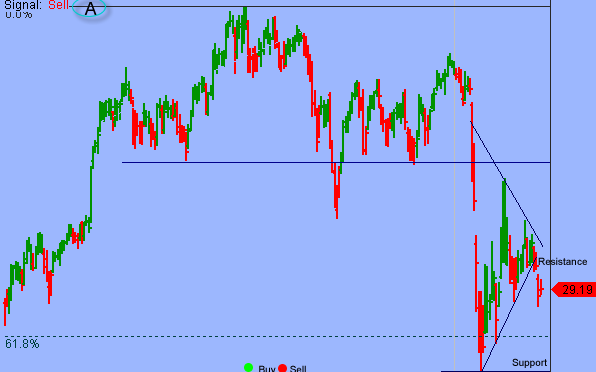 Stocks fell for the first time in four days on Tuesday amid renewed concern over the coronavirus outbreak in New York City.  The Dow Jones Industrial Average fell 0.5 percent to 27,452.66. The S&P also dipped 0.5 percent to 3,335.47 while the Nasdaq Composite slid 0.3 percent to 11,085.25.  The CBOE Volatility Index (VIX), widely considered the best gauge of fear in the market, rose less than 1 percent to 26.27.

Financials, mostly banks, which had led the broader market’s strong opening this week, gave up gains from a day earlier as investors assess the degree to which rising virus cases will affect the economic recovery.  Morgan Stanley (MS), Citigroup (C) fell more than 2 percent, while Bank of America (BAC) fell 1 percent.  As such, SPDR S&P Bank ETF (KBE) fell 1.39 percent on the day and is down more than 38 percent YTD, underperformed the S&P.  Now the question is what’s next?  Below is an update look at a trade in KBE. 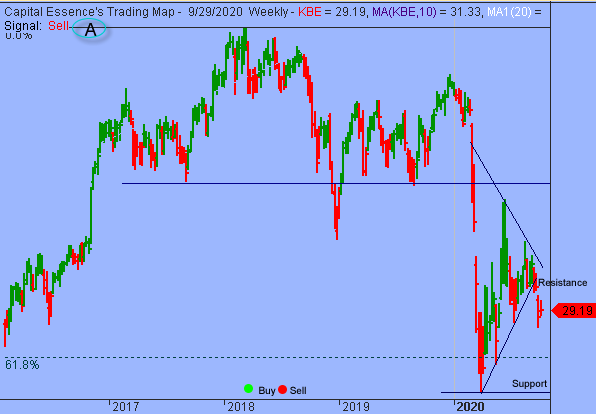 Our “U.S. Market Trading Map” painted KBE bars in red (sell) – see area ‘A’ in the chart.  Since reaching a multi-year low in late March, KBE has been coiled into a tight trading range as it worked off the oversold condition.  Last week breakdown below the March rising trend line suggested that the 6-month triangle pattern has resolved itself into a new downswing.  This is a negative development, increased the probability for a retest of the March low, around 22.50. 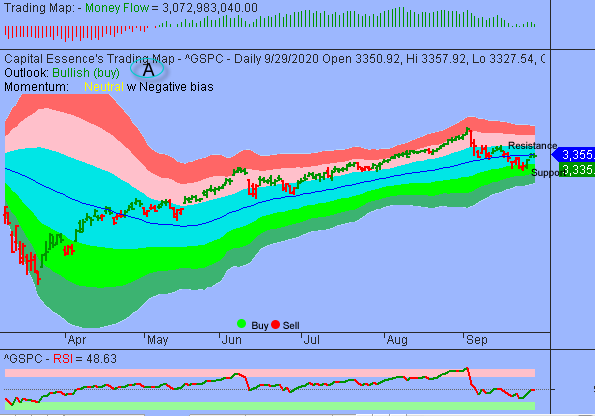 S&P sold off after the early rally attempt ran out of steam near the trend channel moving average.  That level was significant when the index fell below it in in mid-September.  Technically speaking, the longer the index holds below this resistance the stronger it becomes.  Adding to concerns is Money Flow measure, which hovers near the zero line since market broke down, indicating a weak net demand for stocks.  Right now, the most important thing to watch is the retreat and rebound behavior as the 3300 zone is tested as support.  A close below that level suggested that the next leg would be significantly lower and we’re looking at 3100.

For now, the trend channel moving average is the line in the sand.  A close above that level would trigger acceleration toward the September high.

In summary, there is currently a test of resistance at the trend channel moving average, around 3360.  If the S&P fails to climb above that level this week than the next stop will be 3100 with the possibility of a brief breakdown below that level.