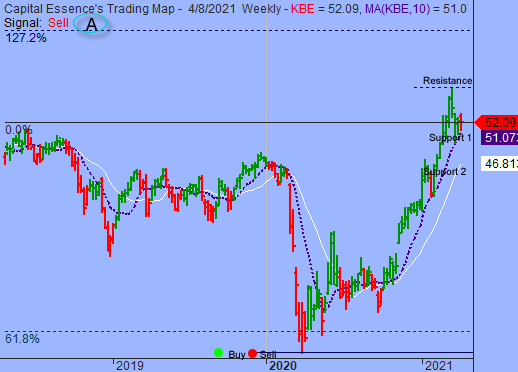 We’ve noted in the previous Market Outlook that: “the big picture remains the same.  There’s an orderly high-level consolidation period near S&P’s 4100, which represented the digestion period in the aftermath of the March rally.  Market internals remains supportive of further advance.  So it seems to us that S&P might take a leg higher as soon as it works off excessive optimism.”  As anticipated, S&P closed at all-time highs for the second straight day Thursday, rose 0.4 percent to 4,097.16, as big tech continued to ride the fall in bond yields after Federal Reserve Jerome Powell indicated that “unevenness” in the recovery will keep easy monetary policy on the Fed’s menu for some time.  The Dow Jones Industrial Average added rose 0.17 percent. The tech-heavy Nasdaq Composite was up 1.03 percent.  The CBOE Volatility Index (VIX), widely considered the best gauge of fear in the market, fell more than 1 percent to 16.95.

Banks, however, lagged the broader market rally as stuttering bond yields dented sentiment on the interest-rate sensitive sector ahead of earnings from major Wall Street banks next week.  JPMorgan (JPM) was higher, while Citigroup (C) and Bank of America (BAC) remained below the flat line.  As such, the SPDR S&P Bank ETF (KBE) rose 0.15 percent on the day and is up nearly 25 percent YTD, outperformed the S&P.  Now the question is what’s next?  Below is an update look at a trade in KBE. 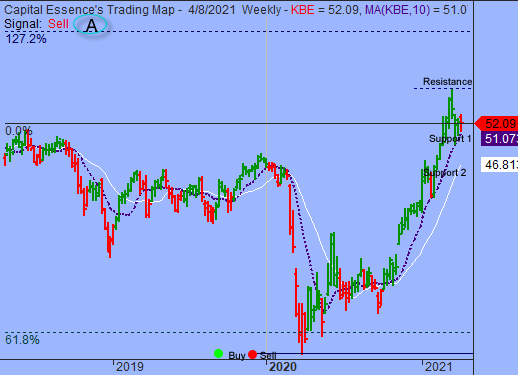 Our “U.S. Market Trading Map” painted KBE bars in red (sell) – see area ‘A’ in the chart. Over the past few weeks, KBE has been trending lower in a short-term corrective mode after the early February rally ran out of steam near the 56 zone.  The March correction is testing support at the late 2020 rising trend line.  The overall technical backdrop deteriorated, suggesting that the support might not hold for long.  Right now the most important thing to watch is trading behaviors near the 51 zone.  A close below that level on a weekly closing basis signifies a bearish breakout and a retest of the more important support near the 47 zone, should be expected.

KBE has resistance near 56.  Short-term traders could use that level as the logical level to measure risk against. 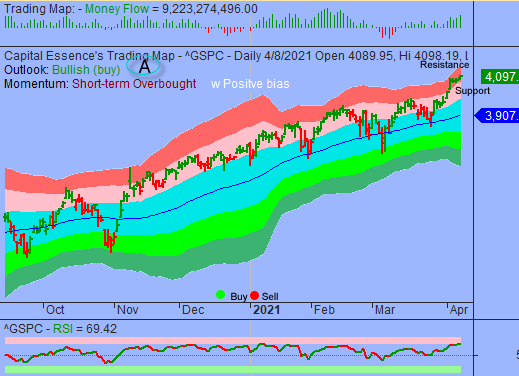 As expected, the S&P moved up to test resistance at the 4100 zone after climbed above the lower boundary of the red band last week.  This is a positive development but let’s notice that the index is fast approaching the upper boundary of the red band, or extreme overbought zone, following recent advance.  Money Flow measure trended higher from above zero line but still far below the February peak, indicating less money is chasing stocks higher.  Adding to concerns is extreme overbought conditions.  While overbought condition is normal during a pro-long uptrend, it’s suggested that upside momentum might not sustain without at least a short-term breather.  These elements might negatively affect trading sentiment over the coming days.  With this in mind we’d consider reducing exposure into overbought strength.

While more backing and filling would not be a surprise, a close below 4070 would see a massive pickup in volatility.  We’d turn particularly bearish if the index closes twice below that level.

In summary, while it’s possible that the S&P might continue drifting higher as trading sentiments remains strong, the fact that Money Flow measure printed a lower high as prices ascending does not favor a sustain breakout.  As for strategy, traders should look to reducing exposure into overbought strength or at least buying downside protection for winning positions.