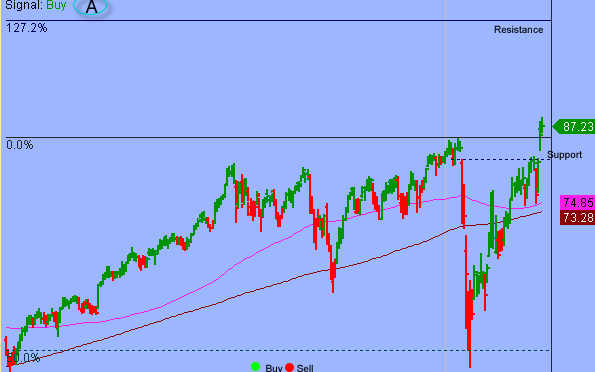 We’ve noted in the previous Market Outlook that: “there’s an orderly high-level consolidation period near S&P’s 3600, which represented the digestion period in the aftermath of the late October rally.  Market internals remains positive and downside momentum does not appear strong enough to generate widespread breakouts.  As for strategy, buying into short-term dips remains the most profitable strategy.”  As anticipated, stocks closed lower Wednesday after Mayor Bill de Blasio announced New York City’s public schools will move to remote learning only as the city tries to tamp down a growing number of coronavirus cases.  The Dow Jones Industrial Average dropped 1.2 percent to 29,438.42 in a volatile session, after rising as much as 147 points at its session high. The S&P slid 1.2 percent to 3,567.79, while the tech-heavy Nasdaq Composite fell 0.8 percent to 11,801.60.  The CBOE Volatility Index (VIX), widely considered the best gauge of fear in the market, rose more than 4 percent to 23.76.

Boeing (BA) cut gains after Morgan Stanley warned that bullish sentiment on the stock was getting ahead of fundamentals. The aircraft had been up more than 6% intraday after the Federal Aviation Authority ordered the ungrounding of Boeing’s 737 Max, which was involved in two deadly crashes.  As such, the Industrial Select Sector SPDR Fund (XLI) fell 0.45 percent on the day but is up more than 7 percent YTD, slightly underperformed the S&P.  Now the question is what’s next?  Below is an update look at a trade in XLI. 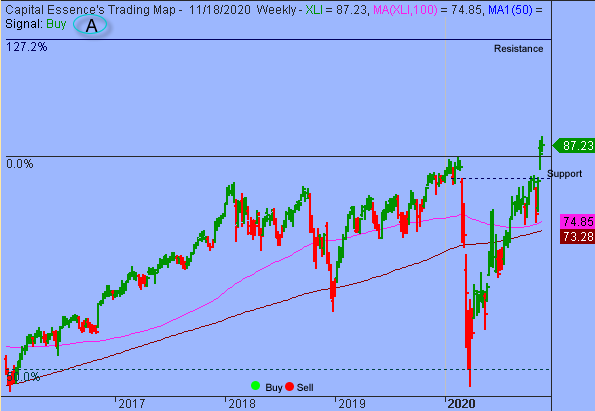 Our “U.S. Market Trading Map” painted XLI bars in green (buy) – see area ‘A’ in the chart.  XLV rebounded nicely after the late October pullback found support near the 2-year moving average, a key technical level based on moving averages.  The early November rally pushed the ETF above the prior high set in early September, signify a bullish breakout.  Right now the most important thing to watch is trading actions near the 85 zone.  A close above that level on a weekly closing basis will confirm the bullish signal and trigger acceleration toward the 127.2% Fibonacci extension, around 105.

The mid-November bullish breakaway gap, around 83, represents the logical level to measure risk against.  All bets are off should XLI close below that level. 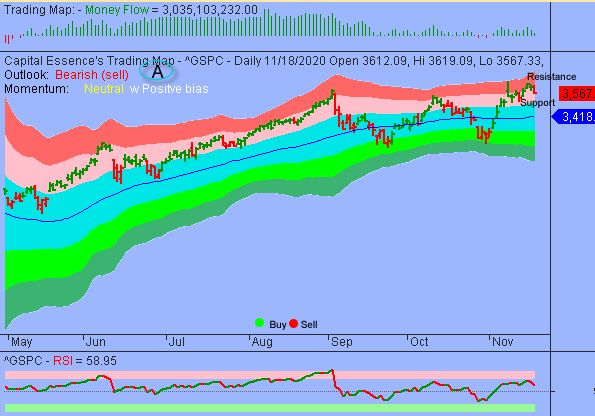 S&P sold off sharply after recent rally ran out of steam near the red band, just above the important sentiment 3600 mark.  This level was significant when the S&P climbed above it on Monday.  Momentum indicator shifted lower from near overbought zone, suggesting further short-term weakness likely. Money Flow measure hovers near the zero line, indicating a weak net demand for stocks.  These elements will continue negatively affect trading sentiment in the coming days.  Right now follow-through is the key.  We’d turn particular bearish if S&P closes twice below 3600.

In summary, S&P broke key supports Wednesday, signify a bearish trend reversal.  While the near-term technical backdrops favors further short-term weakness, it will be important to monitor the retreat and rebound behaviors to determine whether breakouts are decisive.