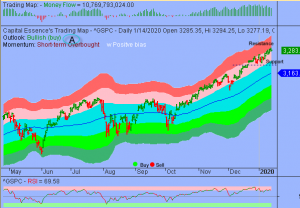 We’ve noted in the previous Market Outlook that: “although overbought condition is keeping buyers at bay, S&P’s 3300 continues to act as price magnet.  Short-term traders can anticipate increase short-term volatility with rapid up and down moves in the market.”  As anticipated, stocks traded higher in early Tuesday session that saw the S&P traded as high as 3294 before sellers stepped in and pushed prices off the intraday high.  Contributed to the overall weakness was report that the United States would likely maintain tariffs on Chinese goods until after November’s presidential election.  For the day, the S&P lost 0.15 percent to 3,283.15.  The Dow Jones Industrial Average rose 0.11 percent to 28,939.67. The Nasdaq Composite dropped 0.24 percent to 9,251.33.  The CBOE Volatility Index (VIX), widely considered the best gauge of fear in the market, rose less than 1 percent to close at 12.39.

FedEx shares to close higher by 1.8 percent following report that Amazon will let sellers us FedEx’s ground delivery services after a temporary ban from the e-commerce giant. Delta Air Lines Inc. rose 3.3 percent after better-than-expected quarterly profit, boosted by customers gained from rival airlines’ 737 MAX cancellations.  As such, the iShares Transportation Average ETF (IYT) rose 0.92 percent on the day after climbing about 19 percent in 2019, underperformed the S&P.  Now the question is whether the rally has more legs?  Below is an update look at a trade in IYT. 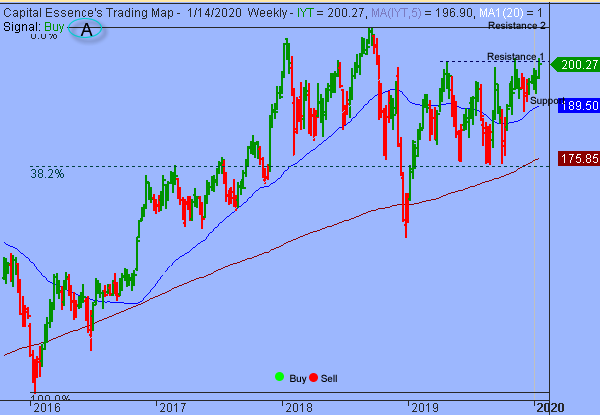 Our “U.S. Market Trading Map” painted IYT bars in green (buy) – see area ‘A’ in the chart. Over the past few weeks, IYT has been trending higher after the early November correction found support near the 1-year moving average, a key technical level based on moving averages.  This week’s rally pushed the ETF up against 200 zone.  This level as tested several times throughout 2019.  A close above it on a weekly basis signify a bullish breakout and trigger acceleration toward the 2018 high, just above 209.

IYT has support near 192.  Short-term traders could use that level as the logical level to measure risk against.

Once again, S&P retreated after the early rally attempt ran out of steam near the lower boundary of the red band, or extreme overbought zone.  As mentioned, the normal behavior for the S&P has been to consolidate and retreated almost every time it traded above that level so it should not be surprised to see some consolidation patterns develop in this area.  While more backing and filling would not be a surprise, if the S&P could hold above 3272 then a move above 3300 would be easier to be achieved.

In a longer term, the overall technical backdrop remains positive so pullback could be shallow and quick.  For now, 3200 is the line in the sand.  A close below that level will trigger another selloff with initial downside target near 3163.  Resistance is at the lower boundary of the red band, currently at 3294.  As mentioned, a trade above that level often marked short-term market top so traders should put it on the trading radar.

In summary, S&P rally attempt failed at formidable resistance.  If the index fails to hold above 3272, then the next stop will be 3252 with the possibility of a brief breakdown below that level.