Equity market closed higher Friday, led by financials and tech stocks ahead of the busiest week of corporate earnings that could set market direction for weeks to come.  The Dow Jones Industrial Average gained 0.7 percent to 34,043.49. The S&P rose 1.1 percent to 4,180.17 while the tech-heavy Nasdaq Composite climbed 1.4 percent to 14,016.81.  The CBOE Volatility Index (VIX), widely considered the best gauge of fear in the market, tumbled more than 8 percent to 17.33.

In technology, big tech recovered losses from a day earlier as investors took advantage of the recent selloff ahead of the busiest earnings week.  Intel (INTC) fell more than 5 percent after it beat first-quarter estimates and raised its guidance, but the sharp pace of recovery in its stock price ahead of the report was perhaps too much too soon, according to some on Wall Street.  As such, the iShares PHLX Semiconductor ETF (SOXX) rose 1.82 percent on the day and is up more than 14 percent YTD, outperformed the S&P.  Now the question is what’s next?  Below is an update look at a trade in SOXX.

Our “U.S. Market Trading Map” painted SOXX bars in green (buy) – see area ‘A’ in the chart.  Over the past few weeks, SOXX has been trending lower in a short-term corrective mode after the early March rally ran out of steam just above the prior high set in February.  The overall technical backdrop remains positive, suggesting that SOXX will take a new leg higher as soon as it works off excessive optimism.  A close above 450 on a weekly closing basis will confirm this and trigger acceleration toward the 660 zone or the 261.8% Fibonacci extension.

SOXX has support around 410.  Short-term traders could use that level as the logical level to measure risk against. 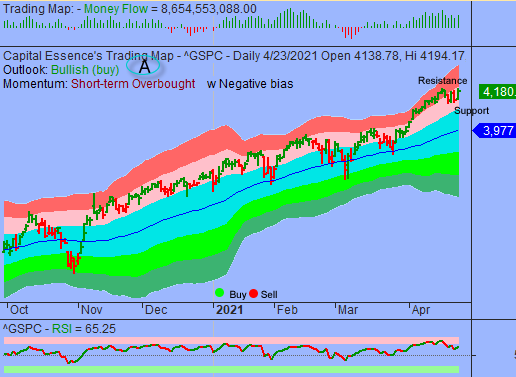 Once again, S&P moved up to test resistance at lower boundary of the red band after recent pullback found support near 4100.  Money Flow measure flashed a weak bearish signal.  The indicator printed a lower high as prices breakout to new high in early April, suggesting that the bears are more aggressive as prices dropped than the bulls were as prices ascended. Market is short-term overbought, following recent rally. This will give the bulls more pressure than they have already had.

For now, 4100 is the line in the sand.  A failure to hold above it indicated that long-term buying pressure has been exhausted and a much deeper pullback should be expected and we’re looking at 3460, based on the trend channel moving average.

On the upside, S&P has the lower boundary of the red band, around the important sentiment 4200 mark, to trade against.  The normal behavior for the S&P has been to consolidate and retreated almost every time it traded above that level so there is a high probability that a significant consolidation pattern will again develop in this area.

In summary, the fact that the S&P is overbought as it approached key price level that had been successful in repelling price action in the past suggested that upside gains could be limited.  As for strategy, traders should consider buying into market dips rather than chasing breakouts.