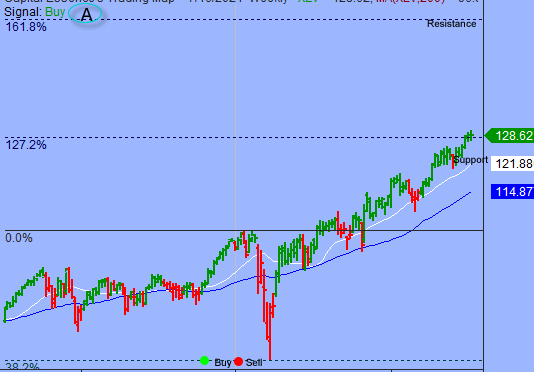 We’ve noted in the previous Market outlook that: “our near-term works on price structure and momentum suggested strongly that the S&P is in a midst of a short-term overbought consolidation.”  As anticipated, S&P fell on Friday, dipped 0.75 percent to 4,327.16, as inflation fears overshadowed strong retail sales numbers and better-than-expected earnings reports.  The Dow lost 0.86 percent to 34,687.85 and the Nasdaq Composite shed 0.8 percent to 14,427.24.  The CBOE Volatility Index (VIX) widely considered the best gauge of fear in the market, rose nearly 9 percent to 18.45.

Health stocks were in the ascendency led by a rally in Moderna Inc (MRNA), which jumped 10 percent on news that the stock would be included in the S&P as of July 21st.  BioNTech SE (BNTX), meanwhile, was up more than 4 percent after the U.S. Food and Drug Administration has granted priority review of the biologics license application of their mRNA Covid-19 vaccine in patients aged 16 years and older.  As such, the Health Care Select Sector SPDR Fund (XLV) rose 0.27 percent on the day and is up nearly 14 percent YTD, slightly underperformed the S&P.  Now the question is what’s next?  Below is an update look at a trade in XLV. 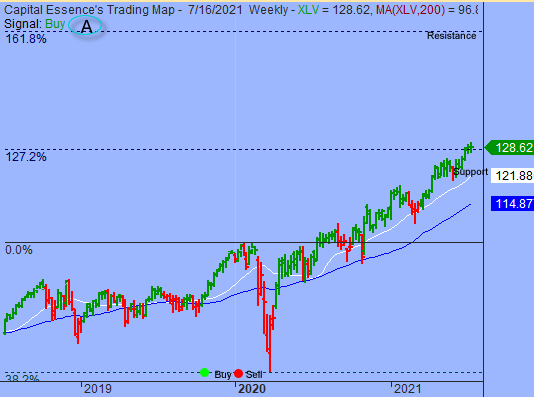 Our “U.S. Market Trading Map” painted XLV bars in green (buy) – see area ‘A’ in the chart.  XLV has been on a tear in recent days after the late May correction found support near the 2020 rising trend line.  Last week’s upside follow-through confirmed the early July bullish breakout above the 127.2% Fibonacci extension.  The overall technical backdrop remains positive of further advance.  So it seems to us that the rally could carry XLV up to the next level of resistance at the 161.8% Fibonacci extension, around 156.

XLV has support around 122.  Short-term traders could use that level as the logical level to measure risk against. 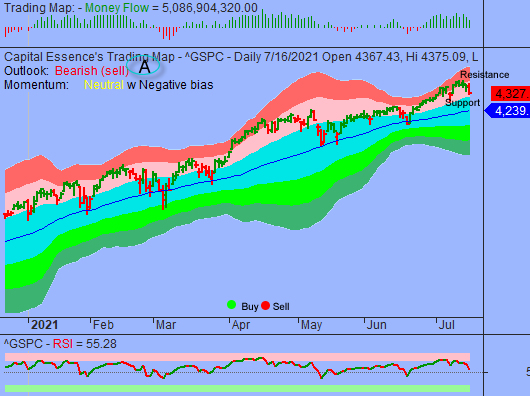 Once again the S&P moved down to test support at the lower boundary of the pink after early July rally ran out of steam near the lower boundary of the red band.  Momentum indicator trended lower from overbought zone, suggesting further short-term weakness likely.  Money Flow measure flashed a weak bullish signal as it trended lower from above the zero line, indicating buying pressure has eased.  Right now, lower boundary of the pink band, around the important sentiment 4300 mark, is the line in the sand. A close below that level would see a massive pickup in volatility and a test of the more important support near 4240, based on the trend channel moving average, should be expected.

Resistance is at the lower boundary of the red band, around 4400.  As mentioned, the normal behavior for the S&P has been to consolidate and retreated almost every time it traded above that level so there is a high probability that a significant consolidation pattern will again develop in this area.

In summary, market internals had been weakened as S&P moved down to test support at the lower boundary of the pink band.  The longer the index stays near that level, the more vulnerable it is to lower prices.  This is the real danger in the current market.