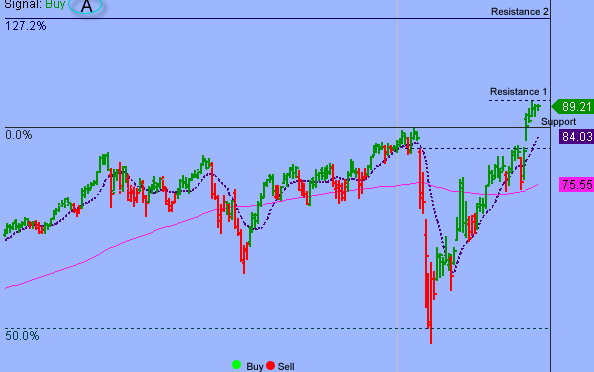 We’ve noted in the previous Market Outlook that: “S&P developed a high volatility with fast up and down moves near the lower boundary of the red band.  While market seems vulnerable to some downside retracement over the short-term, we’re long-term positive for S&P as we believe selloff would be shallow and quick.”  As anticipated, S&P traded lower in early Tuesday session amid growing concerns that U.S. employment growth continues to slow down and the number of Covid-19 cases keeps rising.  The bench mark gauge however, managed to overcome the early weakness and closed higher, rose 0.3 percent to 3,702.25.  The Dow Jones Industrial Average gained 0.4 percent to 30,173.88.  The Nasdaq Composite climbed 0.5 percent to 12,582.77.  The CBOE Volatility Index (VIX), widely considered the best gauge of fear in the market, fell nearly 3 percent to 20.68.

Equifax (EFX) surged 8 percent after the consumer credit reporting company received an upgrade from Barclays (BARC) to overweight from underweight.  As such, the Industrial Select Sector SPDR ETF (XLI) climbed 0.5 percent on the day and is up about 10 percent YTD, slightly underperformed the S&P.  Now the question is what’s next?  Below is an update look at a trade in XLI. 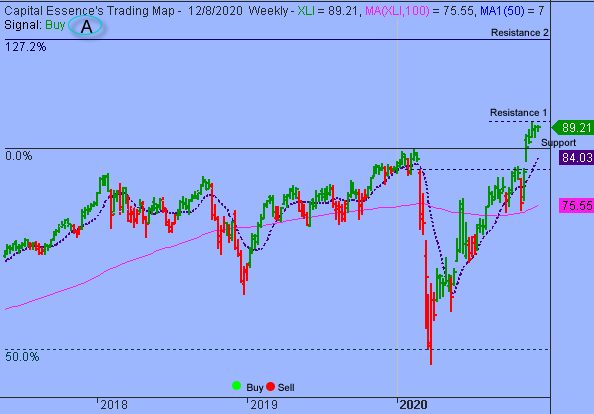 Our “U.S. Market Trading Map” painted XLI bars in green (buy) – see area ‘A’ in the chart.  There is a distinct possibility that a small triangle pattern is currently setting up in the weekly chart of XLI.  Over the past few weeks, XLI has been basing sideways near the 90 zone as it works off overbought conditions after the early November rally pushed the ETF above the prior high set in early 2020.  The overall technical backdrop remains supportive of further advance.  Right now the most important thing to watch is trading behavior as the 90 zone is tested.  A close above that level on a weekly closing basis suggested that the late November triangle pattern has resolved itself into a new upswing with upside target around 105, or the 127.2% Fibonacci extension.

The early 2020 high, around 85, represents the logical level to measure risk against.  All bets are off should XLI close below that level. 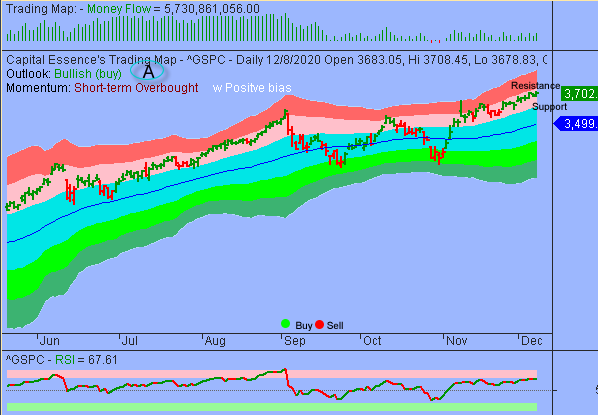 Key technical development in Tuesday trading session was a close above the important sentiment 3700 mark.  That level was tested several times over the past week.  The bullish breakout would be confirmed on another close above 3700 this week, which would support upside follow-through and a test of resistance at the red band, currently at 3735-3850.  As mentioned, the normal behavior for the S&P has been to consolidate and retreated almost every time it traded above the lower boundary of the red band so there is a high probability that a significant consolidation pattern will again develop in this area.  Additionally, overbought conditions has returned on an intraday basis so it should not be surprising to see some backings and fillings in the coming days.

In summary, S&P cleared key resistance, breaking out above the important sentiment 3700 mark.  Consecutive close above 3700 this week would confirm Tuesday’s bullish reversal signal, supporting upside follow-through in the days ahead.  However, market is short-term overbought following recent advance. There could be a sell-off in the offing but it would be shallow if so.