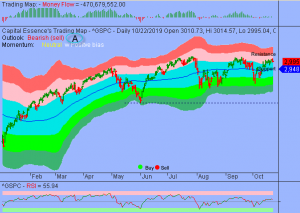 We’ve noted in the previous Market Outlook that: “the fact that market is overbought as S&P poked its head into the level that had been successful in repelling price action in the past does not favor a sustain breakout.  The overall technical backdrop however, remains bullish so we’d look to reduce exposure into overbought strength, which might take the S&P closer to 3030 before a significant pullback unfolds.”  As anticipated, S&P slid nearly 0.4 percent to 2,995.99 after traded as high as 3014.57 in early Tuesday session.  The Dow Jones Industrial Average fell 0.15 percent to 26,788.10.  The Nasdaq Composite dipped 0.7 percent to 8,104.30.  The CBOE Volatility Index (VIX), widely considered the best gauge of fear in the market, rose more than 2 percent to 14.46.

Biogen surged more than 26 percent after the drug maker announced it will seek regulatory approval for its Alzheimer’s treatment. The stock and lifted the broader biotechnology space.  As such, the iShares Nasdaq Biotechnology ETF (IBB) jumped 1.66 percent for the day, and is up more than 9 percent year-to-date, underperformed the S&P.  Now the question is whether the rally has more legs?  Below is an update look at a trade in IBB. 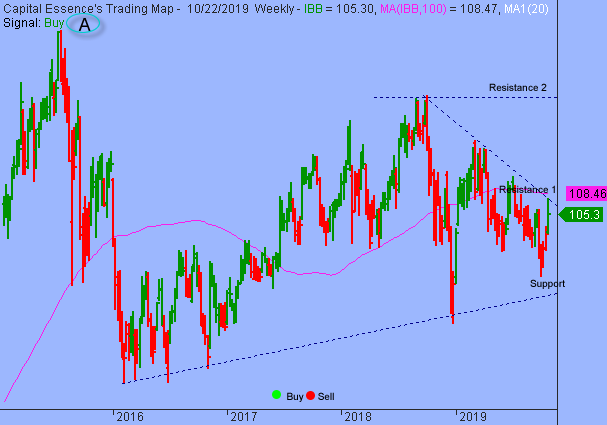 Our “U.S. Market Trading Map” painted IBB bars in green (buy) – see area ‘A’ in the chart. Over the past few weeks, IBB has been trending higher after the July correction found support near the 2016 rising trend line.  This week’s rally pushed the ETF up against the closely watch 108-109 zone. That level roughly corresponds with the 2-year moving average and the 2018 falling trend line.  A sustain advance above that level signify a bullish breakout and upside reversal and open up for a test of the 2018 high, near 123.

IBB has support near 96.  Short-term traders could use that level as the logical level to measure risk against. 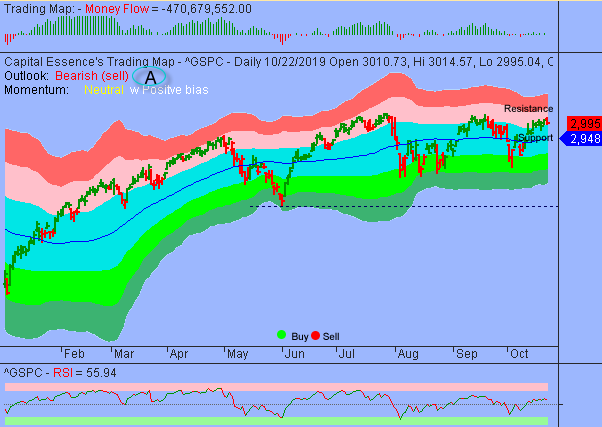 Once again, S&P retreated after the early rally attempt ran out of steam just below the 3020 zone.  The late day selloff pushed the index down to the lower boundary of the pink band. That level has been tested several times in recent days.  It’s obviously the most important level to keep on the trading radar.

Money Flow measure continues to lag price actions.  The indicator fell below the zero line as S&P tested formidable resistance, indicating less money is chasing stock higher.  Additionally, momentum indicator shifted lower from near overbought zone, another sign that upside momentum is waning.  These elements suggested that support at the lower boundary of the pink band might not hold for long and the S&P might have to move to a much lower to attract new buyers.  A close below 2995 will confirm this.

In summary, daily chart of the S&P has shown significant signs that momentum is waning, suggesting that the index vulnerable to some downside retracement over the short-to-intermediate term.  If S&P fails to hold above 2995, then the next stop will be 2960 with the possibility of a brief breakdown below that level.