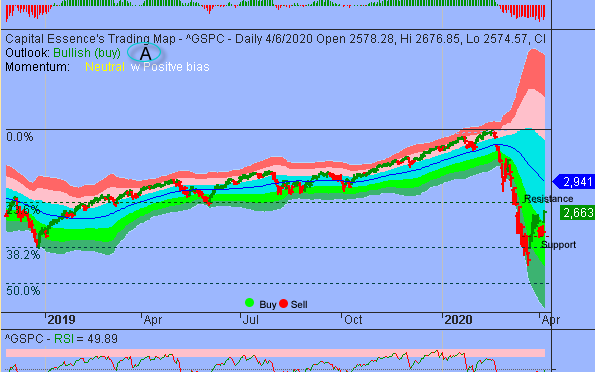 Stocks closed higher Monday as traders cheered signs that measures to curb the Covid-19 pandemic in hard-hit areas like New York and New Jersey were taking shape.  The rate of daily new infections and fatalities in New York had held relatively flat for a second-straight day, New York Gov. Andrew Cuomo said. Although it is still early to determine a lasting trend.  For the day, the Dow Jones Industrial Average jumped more than 7 percent to 22,679.99. The S&P gained 7 percent to 2,663.68 while the Nasdaq Composite surged 7.3 percent to 7,913.24.  The CBOE Volatility Index (VIX), widely considered the best gauge of fear in the market, fell more than 3 percent to 45.24.

Technology led the broader rally on Wall Street, as investors piled into FANG names and chip stocks.  As such, the Technology Select Sector SPDR ETF (XLK) surged 8.53 percent on the day but is down nearly 9 percent YTD, outperformed the S&P.  Now the question is whether the rally has more legs?  Below is an update look at a trade in XLK. 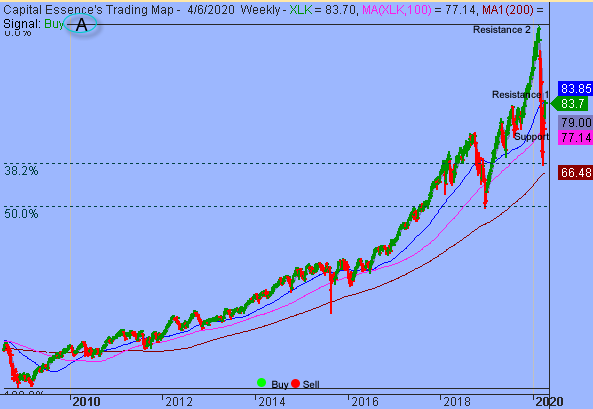 Our “U.S. Market Trading Map” painted XLK bars in green (buy) – see area ‘A’ in the chart.  Over the past few weeks, XLK has been trending higher after the late February massive selloff found some footing near the 68 zone, or the 38.2% Fibonacci retracement of the 2009-2020 upswing and the 4-year moving average.  This week’s rally pushed the ETF against the closely watch 84 zone, or the 1-year moving average.  This level is significant in charting terms.  A close above it on a weekly basis signify a bullish breakout and a retest of the February high is easier to be achieved.

XLK has support near 77.  Short-term traders could use that level as the logical level to measure risk against. 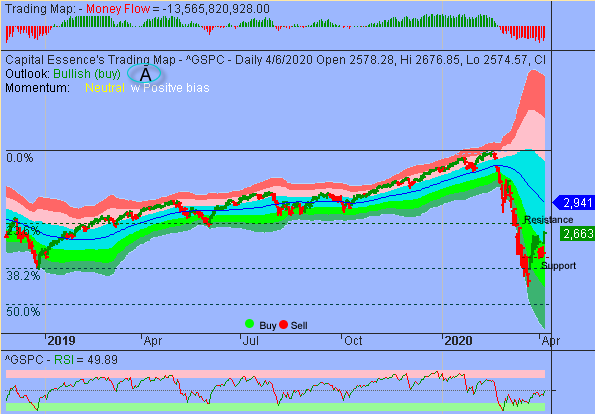 Right now, follow-through is the key.  A consecutive close above 2650 will confirm the bullish signal and setting the stage for a rapid advance toward the next level of resistance near the 2750 zone, or the 23.6% Fibonacci retracement of the 2009-2020 major upswing.

For now, the late March breakout point, around 2740, represents key support.  A close below that level will invalidate Monday’s bullish reversal signal and a retest of the March low, just below 2200, should be expected.

In summary, S&P cleared key resistance, breaking out above the late March’s recovery high.  Consecutive close above 2650 would confirm Monday’s bullish reversal signal, supporting upside follow-through in the days ahead.