We’ve noted in the previous Market Outlook that: “an overbought pullback consolidation interrupted the multi-month rally in the S&P.  Although seemingly vulnerable to further short-term weakness, the overall technical backdrop remains positive so expect S&P to attract buyers in any pullback toward the 3400 zone.”  As expected, S&P traded sharply lower in early Thursday session after data suggesting the resilience seen in the labor market could start to give way without further stimulus to support the broader economy.  The bench mark gauge however, pared losses as big tech cut losses and value stocks shined despite uncertainty over stimulus, slid 0.2 percent to 3,483.34.  The Dow Jones Industrial Average gave up 0.07 percent to 28,494.20.  The Nasdaq Composite pulled back 0.5 percent to 11,713.87.  The CBOE Volatility Index (VIX), widely considered the best gauge of fear in the market, rose more than 2 percent to 26.97.

Healthcare stocks were also among the biggest losers on the day, led by 20 percent slump in Vertex Pharmaceuticals (VRTX) after it stopped testing on a protein deficient treatment amid safety concerns.  As such, the iShares Nasdaq Biotechnology ETF (IBB) fell 2.27 percent on the day and is up more than 15 percent YTD, outperformed the S&P.  Now the question is what’s next?  Below is an update look at a trade in IBB. 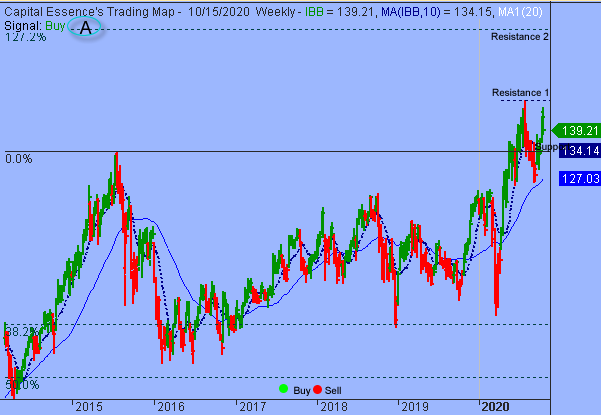 Our “U.S. Market Trading Map” painted IBB bars in green (buy) – see area ‘A’ in the chart.  Over the past few weeks, IBB has been trending higher after the late July correction found support near the one-year moving average, a key technical level based on moving averages. This week’s rally pushed the ETF up against the prior high set in summer 2020.  The overall technical backdrop remains positive, providing support for further advance. Right now, the most important thing to watch is trading behavior near the 147 zone.  A close above that level on a weekly closing basis has measured move to around 165, or the 127.2% Fibonacci extension.

IBB has support near 135.  Short-term traders could use that level as the logical level to measure risk against. 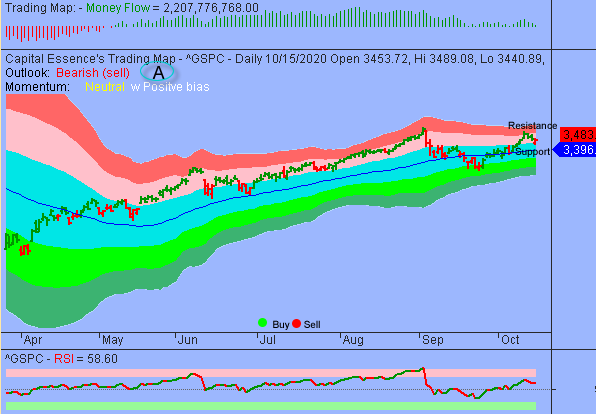 As expected, S&P moved down to test support at the 3440 zone.  That level roughly corresponds with the lower boundary of the pink band.  The late day rally suggested that the support would hold, at least for the time being.  Money Flow measure hovers just above the zero line, indicating a weak net demand for stocks.  The fact that buying pressure deteriorated as the S&P tested key price level suggested that most of the potential buyers at this level had already placed their bets.  The next batch of buyers typically sits at a much lower level.  While more backing and filling would not be a surprise, a failure to hold above 3440 would see a pickup in volatility and a test of the more important support at the 3400 zone, or the trend channel moving average, should be expected.