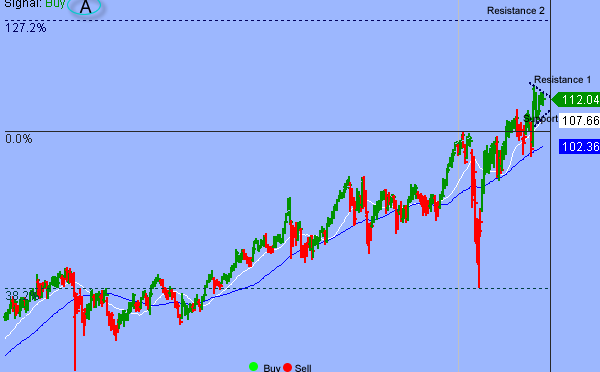 Health care outperformed Tuesday after the Food and Drug Administration on Tuesday confirmed that Moderna (MRNA)’s coronavirus vaccine was 94.1% effective, with “no specific safety concerns,” teeing up the drug for emergency authorization, expected later this week.  Eli Lilly (LLY) said it had reached a deal to acquire Prevail Therapeutics (PRVL) in a deal worth about $1 billion, sending the latter’s shares up more than 80 percent.  As such, the Health Care Select Sector SPDR ETF (XLV) rose 1.08 percent on the day and is up about 10 percent YTD, slightly underperformed the S&P.  Now the question is what’s next?  Below is an update look at a trade in XLV.

Our “U.S. Market Trading Map” painted XLV bars in green (buy) – see area ‘A’ in the chart.  The first dominant feature on the chart is the rising trend line starting in early 2020.  The second dominant feature of the chart is the triangle pattern since mid-November, which represents the digestion in the aftermath of the multi-month rally.  The overall technical backdrop remains supportive of further advance. Right now the most important thing to watch is trading behavior near the 115 zone.  A close above that level on a weekly closing basis signify that the November triangle pattern had resolved itself into a new upswing with initial downside target just below 130, based on the 127.2% Fibonacci extension.

The 2020 rising trend line, round 108, represents the logical level to measure risk against.  All bets are off should XLV close below that level. 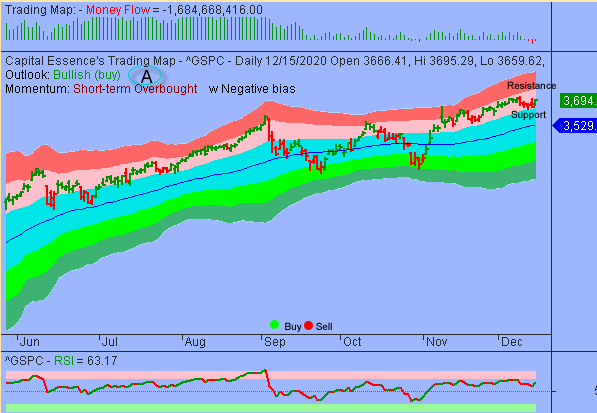 Once again, S&P rebounded nicely off support at the lower boundary of the pink band.  That level was tested several times over the past months.  Money Flow measure flashed a weak bearish signal as it flattened near the zero line last week, indicating a weak net demand for stocks.  Momentum has been strengthened but the indicator is much closer to overbought than oversold zone.  These elements will continue negatively affect trading sentiment in the coming days. So it should not be surprised to see further consolidation within the pink band, between 3650 and 3770.

For now, 3600 is the line in the sand.  Technically speaking, when strong support is broken it means that near-term buying pressure has finally been exhausted.  With that said, a close below 3600 is outright bearish and a much deeper pullback should be expected and we’re looking at 3500.

Short-term trading range: 3600 to 3760.  S&P has support near 3650-3600.  A failure to hold above 3600 indicated that long-term buying pressure has been exhausted and a much deeper pullback should be expected and we’re looking at 3530, based on the trend channel moving average.  Resistance is around 3700.  A sustain advance above that level has measured move to around 3770.

In summary, S&P trades in broad trading bands that define the trend behavior. The upswing was very rapid with some short-term consolidation near each of the significant support or resistance levels. These support and resistance levels also define the limits and barriers to any future rally and uptrend development.  Our near-term technical bias on the S&P is that additional consolidations will unfold between 3650 and 3770.