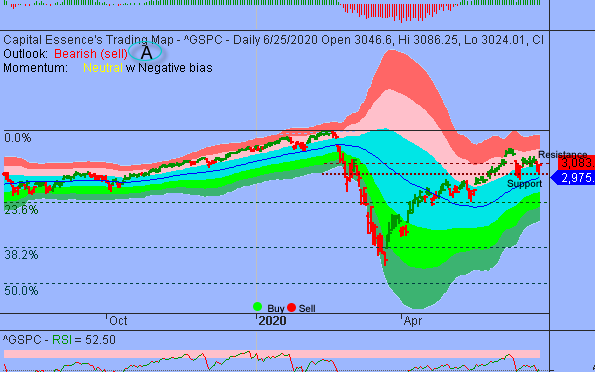 We’ve noted in the previous Market Outlook that: “Wednesday’s downside follow-through confirmed Tuesday’s bearish signal.  While seemingly vulnerable to further short-term weakness, support is strong between the important sentiment 3000 mark and the trend channel moving average, currently at 2970. That zone is too big and too important to fall quickly.  It could help minimize downside follow-through and widespread breakdowns.”  As anticipated, stocks opened lower Thursday that saw the S&P traded as low as 3024 before buyers stepped in and pushed prices higher into the close.  For the day, the bench mark gauge added 1.1 percent to 3,083.76. The Nasdaq Composite also advanced 1.1 percent to 10,017.  The Dow Jones Industrial Average rose 1.2 percent to 25,745.60.  The CBOE Volatility Index (VIX), widely considered the best gauge of fear in the market, fell about 5 percent to 32.22.

Bank stocks jumped ahead of stress tests on reports regulators are set to loosen bank restrictions on investing activities.  JPMorgan (JPM), Goldman Sachs (GS), and Bank of America (BAC) were up more than 3 percent after Federal Deposit Insurance Commission officials reportedly said they would loosen restrictions from the Volcker Rule, a post-financial crisis law designed to stop banks – which received federal and taxpayer bailouts – from engaging in risky trading activities.  As such, the SPDR S&P Bank ETF (KBE) rose 3.27 percent on the day but is down more than 33 percent YTD, underperformed the S&P.  Now the question is what’s next?  Below is an update look at a trade in KBE. 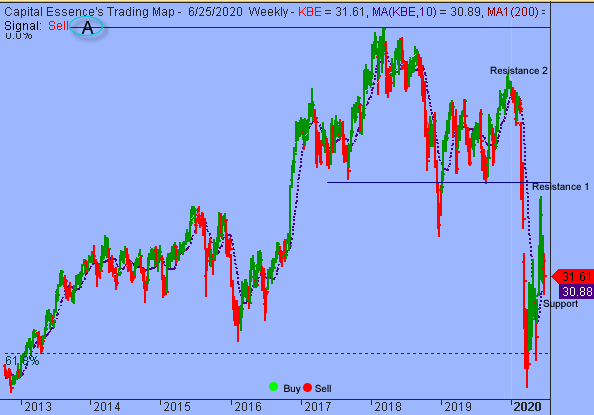 Our “U.S. Market Trading Map” painted KBE bars in red (sell) – see area ‘A’ in the chart.  Over the past few weeks, KBE has been trending lower after the late March recovery rally ran out of steam near the closely watch 38 zone.  That level was significant when the ETF fell below it in early March.  The correction tested support at the 30 zone.  Despite Thursday’s positive trading actions, the overall technical backdrop remains bearish, suggesting that the support might not hold for long.  A close below 30 on a weekly closing basis will bring the March low, just below 23, into view.

KBE has resistance near 38.  Short-term traders could use that level as the logical level to measure risk against. 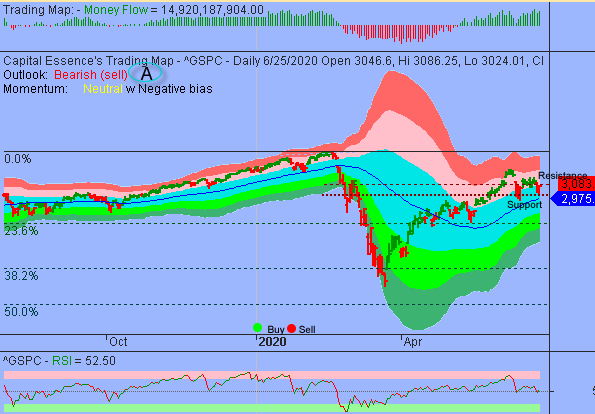 As expected, S&P rebounded nicely after the early selloff attempt found support just above the 3000 zone, a key technical level.  Market internal has strengthened but upside momentum does not appeared strong enough to generate widespread breakouts.  So it should not be surprising to see further consolidations in the coming days.

On the upside, 3100 is acting as price magnet.  A close above that level will turn the short-term trend up and trigger acceleration toward the early June high but it’s not expected this week.

As for support, there is a strong band of support between the important sentiment 3000 mark and the trend channel moving average, currently at 2975.  This level is too big and too important to fall quickly.  Short-term traders could use that level as the logical level to measure risk against.

In summary, market internal has been strengthened after recent pullback found support near S&P’s 3000 zone but upside momentum does not appear strong enough to generate widespread breakouts.  Near-term, there is a high probability of a period of consolidation activity between S&P’s 3000 and 3100 that may last several days if not weeks.  This consolidation band provides a rally and retreat trading environment for traders.