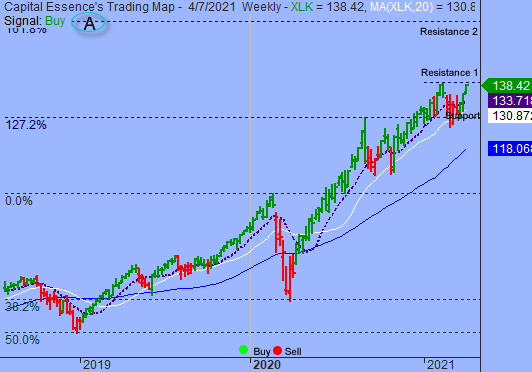 We’ve noted in the previous Market Outlook that: “with prices stretching out to new highs, temptation to take some money off the table is on a rise amid a growing sense that stocks might be running ahead of fundamentals. However, as last week’s trading action suggested, nobody wants to do too much too soon. So, while sitting on the overcrowded bullish bandwagon, we’ll begin to watch for the next sell signal.”  As anticipated, stocks closed mixed Wednesday as gains were kept in check by an uptick in U.S. bond yields after the Federal Reserve’s March meeting minutes continued to signal that easy monetary policy is here to stay.  For the day, the S&P rose 0.1 percent to 4,079.95. The Dow Jones Industrial Average added 0.1 percent to 33,446.26. The tech-heavy Nasdaq Composite dipped 0.1 percent to 13,688.84.  The CBOE Volatility Index (VIX), widely considered the best gauge of fear in the market, fell more than 5 percent to 17.16.

Tech stocks closed off intraday high as U.S. bond yields turned positive.  Worries that the sector run up too fast and is due a correction also weighed.  Microsoft (MSFT), Google-parent Alphabet (GOOGL), Facebook (FB), Apple (AAPL) and Amazon.com (AMZN) traded in the green.  As such, the Technology Select Sector SPDR Fund (XLK) rose 0.53 percent on the day and is up about 7 percent YTD, slightly underperformed the S&P.  Now the question is what’s next?  Below is an update look at a trade in XLK. 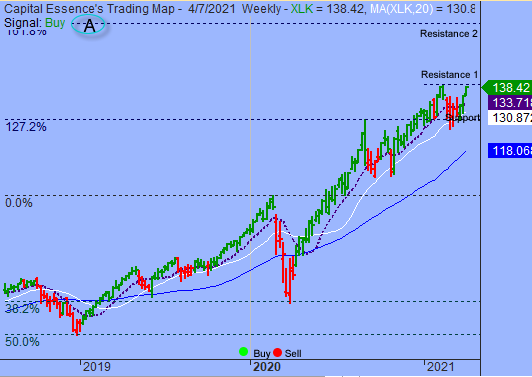 Our “U.S. Market Trading Map” painted XLK bars in green (buy) – see area ‘A’ in the chart. XLK has been on a tear in recent days after the February correction found support near the 2020 rising trend line.  The late March rally pushed the ETF up against the closely watch 140 zone, or the prior high set earlier this year. The overall technical backdrop remains supportive of further advance.  Right now the most important thing to watch is trading behaviors near the 140 zone.  A close above that level on a weekly closing basis signifies a bullish breakout and trigger acceleration toward the 160 zone, or the 161.8% Fibonacci extension.

XLK has support near 130.  Short-term traders could use that level as the logical level to measure risk against. 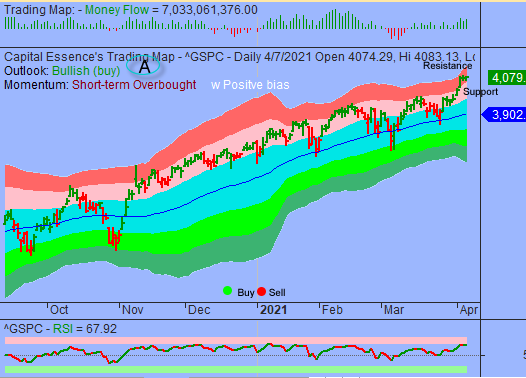 The big picture remains the same.  S&P continues basing sideways near the lower boundary of the red band.  Money Flow measure is above the zero line, indicating a positive net demand for stocks.  Momentum indicator reached the level that has been successful in repelling price action in the past.  Nevertheless, this week’s selloff rally has proved nothing as far as its staying power or as a possible trend reversal. So it seems to us that S&P might take a leg higher as soon as it works off excessive optimism.

While more backing and filling would not be a surprise, a close below 4045 would see a massive pickup in volatility.  We’d turn particularly bearish if the index closes twice below that level.

In summary, the big picture remains the same.  There’s an orderly high-level consolidation period near S&P’s 4100, which represented the digestion period in the aftermath of the March rally.  Market internals remains supportive of further advance.  So it seems to us that S&P might take a leg higher as soon as it works off excessive optimism.