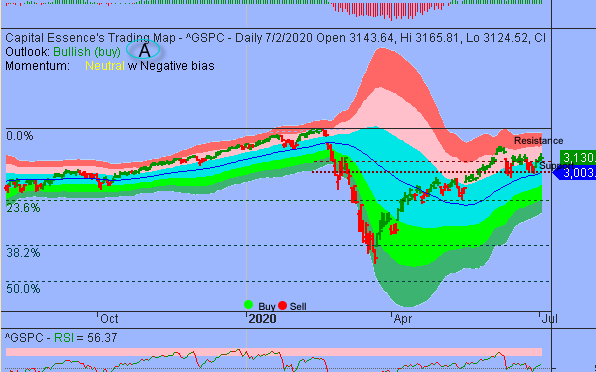 We’ve noted in the previous Market Outlook that: “Wednesday’s upside follow-through confirmed Tuesday’s bullish reversal signal.  Our near-term work on price structure and momentum suggested that the S&P is in a reflexive bounce.  Nevertheless, we will be looking for the index to close above the mid-June congestion zone before getting aggressively long again.” As anticipated, stocks opened sharply higher Thursday that saw the S&P traded as high as 3165 following a better-than-expected U.S. jobs report as the economy tries to recover from the coronavirus pandemic.  The market however, gave back most the early gains and closely slightly higher after Florida reported a one-day spike of more than 10,000 coronavirus cases. The U.S. also reported a record of more than 50,000 cases in one day on Wednesday.  For the day, the bench mark gauge rose 0.5 percent to 3,130.01.  The Dow Jones Industrial Average added 0.4 percent to 25,827.36. The Nasdaq Composite hit a record high, climbing 0.5 percent to 10,207.63.  The CBOE Volatility Index (VIX), widely considered the best gauge of fear in the market, fell more than 3 percent to 27.68.

Gold, a safe store of value during political and financial uncertainty, attracted buying support last week as worries over surging coronavirus cases globally and lingering trade tensions between the United States and China overshadowed strong U.S. jobs data.  As such, the SPDR Gold Shares (GLD) rose 0.22 percent on the day and is up about 17 percent YTD, outperformed the S&P.  Now the question is what’s next?  Below is an update look at a trade in GLD. 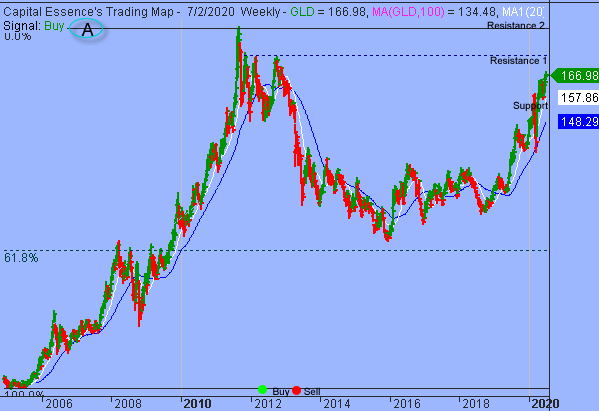 Our “U.S. Market Trading Map” painted GLD bars in green (buy) – see area ‘A’ in the chart.  After reaching a record high of 185.85 in September 2011, GLD rolled over and met anticipated support at 100, just above the 61.8% Fibonacci retracement.  The late 2014 rally pushed the ETF above the 150 zone, or the early 2013 breakdown point.  Last week’s upside follow-through confirmed the late June bullish breakout above the 2-month congestion zone.  This is a positive development, opened up for a test of the 175 zone, or the late 2011-2012 highs.  That level is significant in charting terms.  A consecutive close above it will trigger acceleration toward the all-time high set in 2011, around 185.

GLD has support near 158.  Short-term traders could use that level as the logical level to measure risk against. 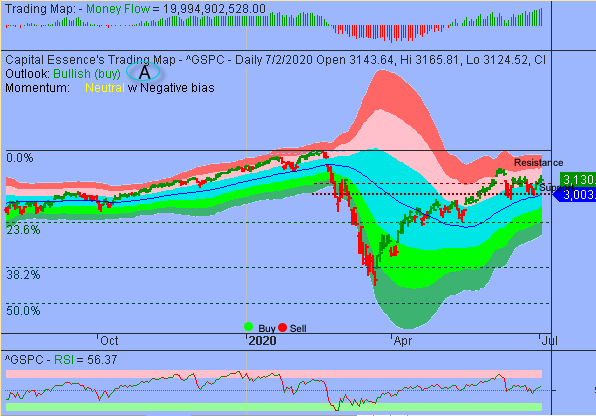 Thursday’s upside follow-through confirmed Tuesday’s bullish breakout above the closely watch 3100 zone. Money Flow measure had trended higher from above the zero line, indicating that net demand for stocks was strong.  However, let’s notice that with last week’s gains, the S&P is now trading against the 3150-3160 zone.  That level was tested several times over the past weeks.  It acted as strong resistance since the index broke down in early June.  There is no reason to turn particularly bullish until this zone is eclipsed.

As for support, S&P must holds above 3100 on a closing basis to prevent a test of the more important support at the 3000 zone, or the trend channel moving average.  That level is significant in charting terms.  A close below that level is outright bearish and a much deeper pullback should be expected and we’re looking at 2900-2700.

In summary, while there is a higher than average odds that the late-day selloff will momentum, the near-term technical outlook remains positive, suggesting that the path with least resistance remains higher as long as the S&P holds above 3100.  As for strategy, buying into short-term market dips remains the most profitable strategy.