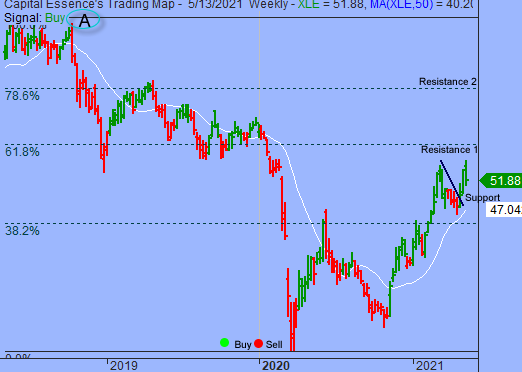 Good Morning, this is Capital Essence’s Market Outlook (the technical analysis of financial markets) for Friday May 14, 2021.

We’ve noted in the previous Market Outlook that: “S&P will have a downward bias this week, pressured by short-term negative momentum but we expect support at the trend channel moving average to remain largely intact.”  As anticipated, stocks closed higher Thursday after a three-day rout, buoyed by a labor market that appears to be strengthening.  The number of Americans filing new claims for unemployment benefits fell more than expected last week with companies scrambling to find workers as demand booms. Initial claims for unemployment benefits fell 34,000 to 473,000 for the week ended May 8.  The S&P gained 1.22 percent, the Dow Jones Industrial Average added 1.29 percent while the Nasdaq Composite rose 0.72 percent.  The CBOE Volatility Index (VIX) widely considered the best gauge of fear in the market, tumbled more than 16 percent to 23.13.

Energy was the only sector seeing a decline as the Colonial Pipeline came back online after being hit by a ransomware attack.  As such, the Energy Select Sector SPDR Fund (XLE) fell 1.22 percent on the day but is up about 37 percent YTD, outperformed the S&P.  Now the question is what’s next?  Below is an update look at a trade in XLE. 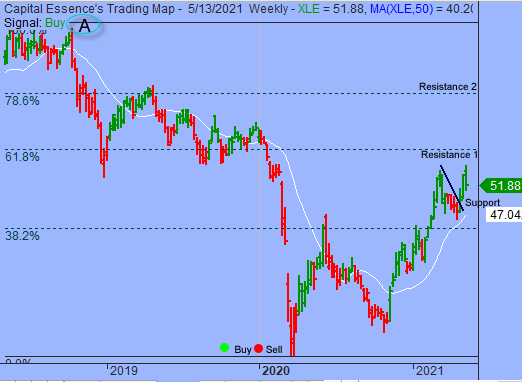 Our “U.S. Market Trading Map” painted XLE bars in green (buy) – see area ‘A’ in the chart.  XLE moved up to test resistance at the 55-58 zone, or the early March recovery high and the 61.8% Fibonacci retracement.  The overall technical backdrop remains positive suggesting that recent selloff is merely a short-term breather and that XLE will take a new leg higher as soon as it works off excessive optimism.  A close above 58 on a weekly closing basis will confirm this and trigger acceleration toward the 68 zone, or the 78.6% Fibonacci retracement.

XLE has support around 47.  Short-term traders could use that level as the logical level to measure risk against. 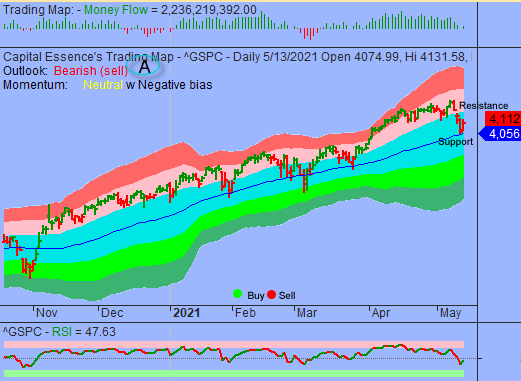 As expected, the S&P rebounded nicely off support at the trend channel moving average.  This is a positive development but let’s notice that while Money Flow measure trended higher, the indicator still well below the prior peak set in April, suggesting a weak net demand for stocks.  This might put a cap on the rally.

Over the next few days, traders should monitor trading behaviors as the lower boundary of the pink band, around 4170, is tested as resistance.  A failure to hold above that level suggested that most of the potential buyers at this level had already placed their bets.  The next batch of buyers typically sits at a much lower level.  While more backing and filling would not be a surprise, a failure to hold above the trend channel moving average, currently at 4056, would see a pickup in volatility and a test of the more important support at the 3940 zone should be expected.

In summary, our near-term works on price structure and momentum suggested strongly that the S&P remains in for a ‘range-bound’ trading environment.  This is a rally and retreat environment. It is not a trending environment. Short-term traders can anticipate continued volatility with rapid up and down moves in the markets.