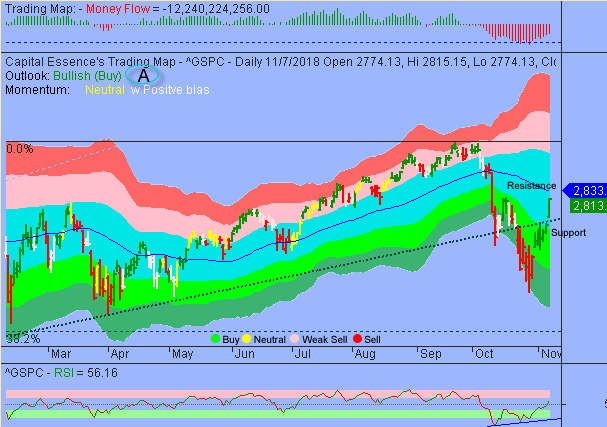 Stocks closed significantly higher Wednesday after the midterm election results came in about as expected.  The prevailing assumption was that a newly divided Congress would preserve market-friendly policies, namely the tax cut and deregulation efforts.  For the day, the Dow Jones Industrial Average climbed 2.1 percent to 26,180.30.  The S&P rose 2.12 percent to close at 2,814.03. The Nasdaq Composite advanced 2.64 percent to 7,570.95.  The CBOE Volatility Index (VIX), widely considered the best gauge of fear in the market, fell nearly 23 percent to 16.36.

All 11 S&P sectors finished in positive territory led by consumer discretionary, up more than 3 percent as Amazon (AMZN) surged nearly 7 percent.  After soaring more than 21 percent in 2017, the Consumer Discretionary Select Sector SPDR ETF (XLY) is up 13 percent YTD, outperformed the S&P by a wide margin.  Now the question is whether the rally has more legs?  Below is an update look at a trade in XLY. 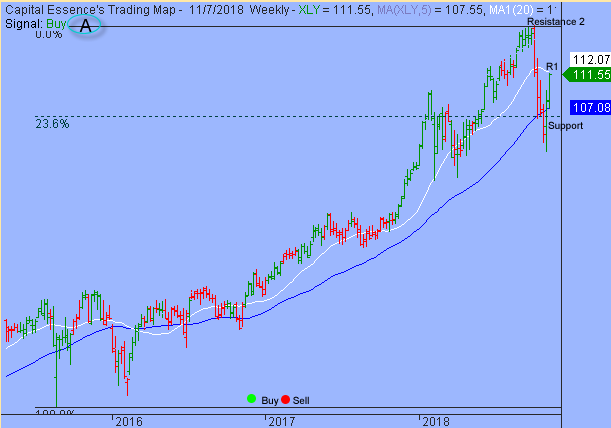 Our “U.S. Market Trading Map” painted XLY bars in green (buy) – see area ‘A’ in the chart. The first dominant feature on the chart is the rising line starting in late 2015.  The second dominant feature of the chart is the downward trend since early October 2018, which represented the digestion period.  The correction found support near the 23.6% Fibonacci retracement.  That level roughly corresponds with the 1-year moving average.  This week’s upside follow-through confirmed last week’s bullish reversal signal and opened up for a test of the important resistance near the 112 zone.  A close above that level on a weekly basis has measured move to 118, or the October highs.

XLY has support near 107.  Short-term traders could use that level as the logical level to measure risk against

Key technical development in Wednesday session was a clear break above the 2016 rising trend line.  That level was significant when the S&P fell below it in October.  This is a positive development, suggesting that an important near-term low has been established and the S&P has now embarked on a rally that should, at least, test 2018 high around 2940.

Momentum has been strengthened over the past few days but the indicator is much closer to overbought than oversold zone.  Additionally, Money Flow measure is still below the zero line, indicating a negative net demand for stocks.  These elements suggested that market might take a short-term breather prior to a new up leg.  With this in mind, we’d look to reduce exposure into intraday rallies, which might take the S&P closer to 2833, based on the trend channel moving average, before a significant pullback unfolds.

In summary, the fact that the S&P finally broke above the 2016 rising trend line, which it has been penetrated over the past few days, was pretty bullish.  Nevertheless, the return of overbought conditions on intraday basis suggested that the market might need a short-term breather.  Now S&P has to trade around Wednesday’s breakout point and test it. That’s what the rest of this week may be about.