Stocks closed little changed as traders wrapped up a strong quarter.  For the day, the S&P fell marginally to 2,913.98.  Dow Jones Industrial Average climbed 0.1 percent to 26,458.31. The Nasdaq Composite outperformed, added 0.1 percent to 8,046.35.  The CBOE Volatility Index (VIX), widely considered the best gauge of fear in the market, fell mora than 2 percent to close at 12.12.

The heavily-weighted financials sector was among the worst performer last week, losing 4.1% in total.  After closing higher for 6 consecutive year since 2012, the SPDR S&P Bank ETF (KBE) fell near 2 percent YTD, while the S&P surged 9 percent over the same period.  Now the question is whether recent pullback is a pause that refreshes or it’s a beginning of something worse?  Below is an update look at a trade in KBE. 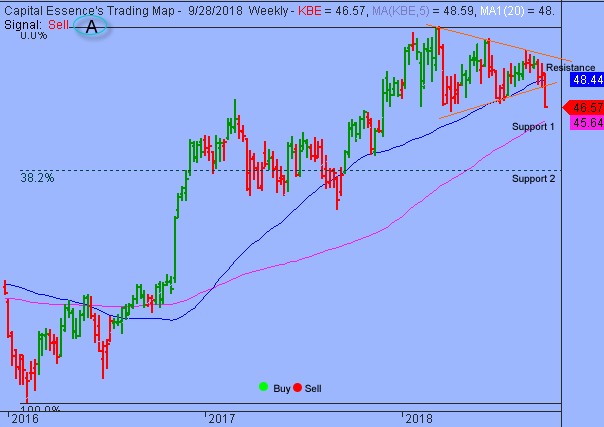 Our “U.S. Market Trading Map” painted KBE bars in red (sell) – see area ‘A’ in the chart.  The first dominant feature on the chart is the rising trend line starting in early 2016.  The second dominant feature of the chart is the massive triangle formation since early 2018, which represents the digestion period.  Last week’s massive selloff pushed KBE below the 1-year moving average, a key support level, and the lower boundary of the 2018 triangle.  This is a negative development, suggesting that the 2018 triangle has resolved itself into a new downswing with short-term downside target near 45.60.  A close below that level has measured move to 42, based on the 38.2% Fibonacci retracement of the 2016 upswing.

KBE has resistance near 48.50.  Short-term traders could use that level as the logical level to measure risk against 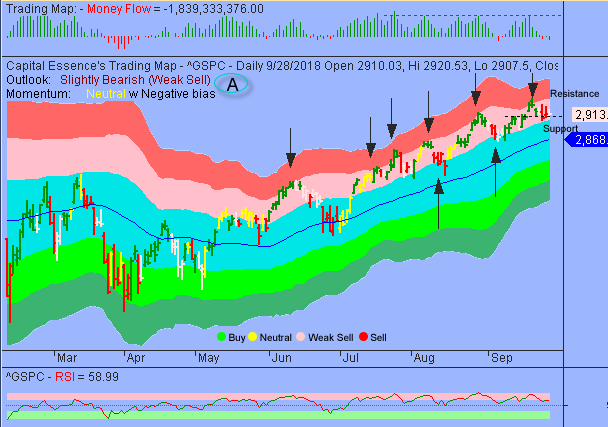 The big picture remains the same.  S&P continues basing sideways using the lower boundary of the pink band as support.  As it was the case over the past months, pullback to this level marked short-term market bottoms. So traders should put it on the trading radar.

Money Flow measure whipsaws around the zero line, indicating a lack of commitment. Momentum indicator had been weakened but the indicator is much closer to overbought than oversold zone.  These elements will continue negatively affect trading sentiment over the coming days.  For now, 2900 is the line in the sand.  We’d turn particular bearish if the index closes twice below that level.

Short-term trading range: 2868 to 3000.  S&P has support near 2900.  A close below that level will trigger a short-term sell signal with downside target near 2868, based on the trend channel moving average.  The index has resistance near 2940, or the lower boundary of the red band.  A close above that level could trigger acceleration toward the upper boundary of the red band, near 3000.  A close above that level often marked short-term market top so traders should put it on the trading radar.

In summary, while market could continue to drift sideways as global trade concerns continue negatively affect trading sentiment, the fact that the S&P pulled back to level that had been successful in repelling price action in the past increased the probability for a short-term bounce. 2900 is the line in the sand.  A close above it is required before there is any real prospect of a change in the medium-term upward pressure.