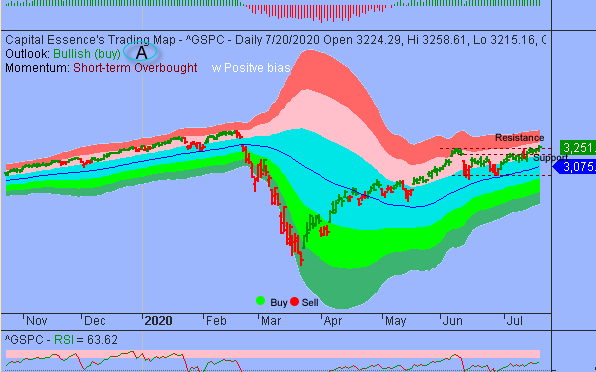 We’ve noted in the previous Market Outlook that: “the big picture remains the same.  There’s an orderly high-level consolidation period near the early June congestion zone, around S&P’s 3230, which represented the digestion period in the aftermath of the late June rally.  The fact that the index managed to hold on to most of recent gains despite overbought conditions, indicating an internal strength.  This increases the probability that the S&P will break out to new highs as soon as the market shakes off the excessive bullishness.”  As anticipated, stocks rose on Monday as investors piled into tech stocks ahead of several quarterly earnings for mega-cap tech companies slated for later this week.  The S&P advanced 0.8 percent to 3,251.84. The Nasdaq Composite jumped 2.5 percent to 10,767.09. The Dow Jones Industrial Average closed just above that flat line at 26,680.87.  The CBOE Volatility Index (VIX), widely considered the best gauge of fear in the market, fell nearly 5 percent to 24.46.

Shares of airline companies suffered broad losses Monday after data from the U.S. Transportation Security Administration showed that travel demand declined last week to snap a 12-week streak of increases since the COVID-19 bottom in mid-April.  The drop in demand comes as U.S. Covid-19 cases topped 3.5 million.  American Airlines (AAL) fell 3.7 percent, United Airlines Holdings Inc. (UAL) slid 4.7 percent and Delta Air Lines Inc. (DAL) shed 3.1 percent.  As such, the U.S. Global Jets ETF (JETS) fell 2.18 percent on the day and is down about 49 percent YTD, underperformed the S&P.  Now the question is what’s next?  Below is an update look at a trade in JETS. 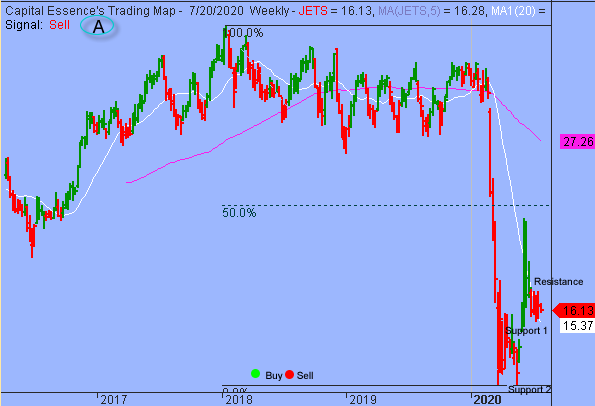 Our “U.S. Market Trading Map” painted JETS bars in red (sell) – see area ‘A’ in the chart.  Over the past few weeks, JETS has been basing sideways using the early June breakout point as support after the mid-May rally ran out of steam just below the 50% Fibonacci retracement of the 2018-2020 downswing.  This is a negative development, suggesting that the ETF might have to move to a much lower level to attract new buyers.  Over the next few weeks, traders should monitor trading behavior near the 15 zone.  A close below that level on a weekly closing basis would bring the May low, just above 11, into view.

JETS has resistance near 18.  Short-term traders could use that level as the logical level to measure risk against. 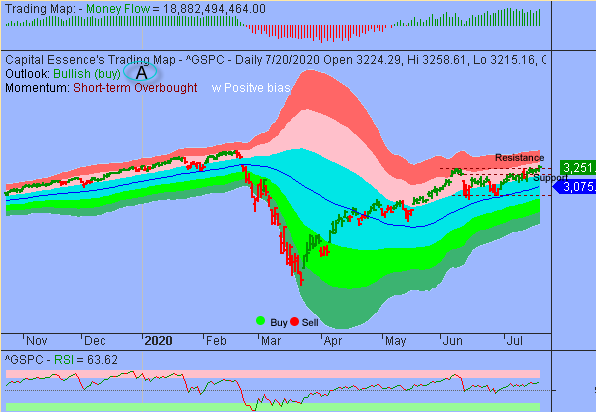 Key technical development in Monday trading session was a clear break above the early June congestion zone.  This is a positive development, signify a bullish breakout and upside reversal.  The bullish breakout would be confirmed on another close above 3233, which would support upside follow-through and a test of resistance at the lower boundary of the red band, around 3300.  Technical speaking, the normal behavior for the S&P has been to consolidate and retreated almost every time it traded above that level so there is a high probability that a significant consolidation pattern will again develop in this area.  Additionally, overbought conditions has returned on an intraday basis so it should not be surprising to see some backings and fillings in the coming days.

S&P has minor support near 3225.  A failure to hold above that level will invalidate Monday’s bullish signal and a retest of the 3190-3100 should be expected.  As mentioned, 3100 is the line in the sand.  That level was significant when the index climbed above it in late June.  When strong support is broken it means that near-term buying pressure has finally been exhausted.  With that said, a close below 3100 is outright bearish and a much deeper pullback should be expected and we’re looking at 3000-2900.

In summary, S&P cleared key resistance, breaking out above the early June congestion zone. Our near-term work on momentum and price structure suggested that the rally can be sustained for a few days, potentially allowing for a test of 3300 before a significant pullback unfolds.