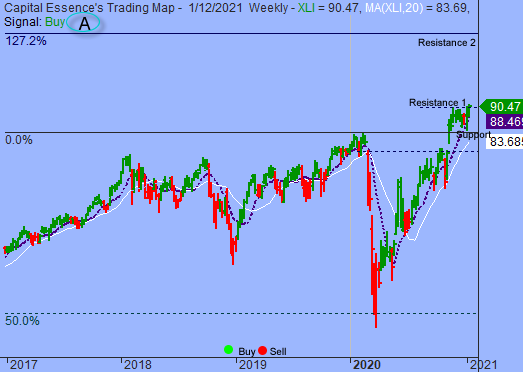 We’ve noted in the previous Market Outlook that: “S&P fell below the important sentiment 3800 mark after climbed above it last week.  While seemingly vulnerable to further short-term weakness, support is strong between 3725-3700. That zone is too big and too important to fall quickly.  It could help minimize downside follow-through and widespread breakdowns.”  As anticipated, S&P closed just above the unchanged mark at 3,801.19 as strength in cyclical stocks ahead of President-elect Joe Biden’s stimulus plans expected later this week offset weakness in tech amid rising political tensions.  Biden is expected to lay out his multi-trillion stimulus plan on Thursday, which is likely to include a proposal to boost stimulus checks to $2,000 from $600, provide state and local aid, and fund the ongoing vaccine roll out.  The Dow Jones Industrial Average rose 0.2 percent to 31,068.69. The Nasdaq Composite added 0.3 percent to 13,072.43.  The CBOE Volatility Index (VIX), widely considered the best gauge of fear in the market, sell more than 3 percent to 23.33.

Industrials attracted strong buying support as Boeing (BA) cut losses late in the session despite reporting that orders fell by 17 in December. Deliveries for the year fell to 157, down from 380 last year.  As such, the Industrial Select Sector SPDR Fund (XLI) rose 1 percent on the day and is up more than 3 percent YTD, outperformed the S&P.  Now the question is what’s next?  Below is an update look at a trade in XLI. 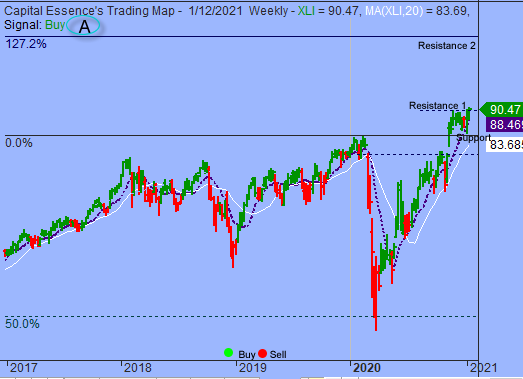 Our “U.S. Market Trading Map” painted XLI bars in green (buy) – see area ‘A’ in the chart.  Over the past few weeks, XLI has been trending lower in a short-term corrective mode. The mid-December correction tested and respected support at the 2020 rising trend line. This week’s rally pushed the ETF above the prior high set in late November, signified a bullish breakout and upside reversal.  The overall technical backdrop remains supportive of further advance.  A close above 90 on a weekly closing basis will confirm Tuesday’s bullish signal and trigger acceleration toward the 104 zone, or the 127.2% Fibonacci extension.

XLI has support near 85.  Short-term traders could use that level as the logical level to measure risk against. 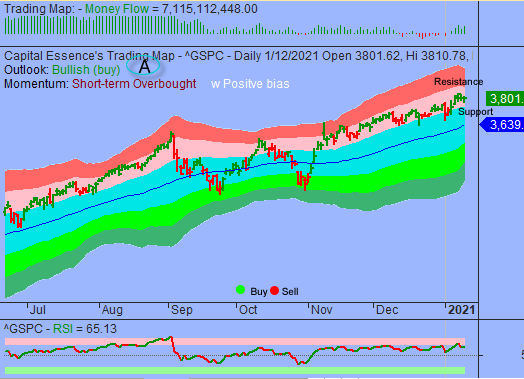 Once again, S&P climbed above the important sentiment 3800 mark after falling below that level in on Monday.  Market internal has been strengthened following but upside momentum does not appeared strong enough to generate widespread breakout.  Over the next few days, traders should monitor the rally and retreat behaviors as last week’s high, around 3826, is tested as resistance.  A sustain advance above that level will the lower boundary of the red band, just below 3870, into view.

While the near-term technical backdrop remains positive, market is short-term overbought following recent advance.  So it should not be surprising to see some backing and filling in the coming days.

In summary, there’s an orderly high-level consolidation period near the important sentiment 3800 mark.  The overall technical backdrop remains supportive of further advance, suggesting that S&P will breakout to new high as soon as it works off excessive optimism.