Equity market ended lower on Thursday, with the Nasdaq tumbling 3 percent, hit by rising Treasury yields and fresh worries about the coronavirus pandemic in Europe.  Losses in U.S. stocks accelerated after France’s prime minister imposed a month-long lockdown on Paris and several other regions due to the health crisis.  For the day, the Nasdaq Composite dropped 3 percent to 13,116.17.  The S&P 500 slid 1.5 percent to 3,915.46.  The Dow Jones Industrial Average fell 0.5 percent to 32,862.30.  The CBOE Volatility Index (VIX), widely considered the best gauge of fear in the market, rose more than 3 percent to 19.90.

Chip stocks tumbled with Broadcom (AVGO), Advanced Micro Devices (AMD) and Qualcomm (QCOM) nursing losses amid worries about rising COVID-19 cases in Europe. As such, the iShares PHLX Semiconductor ETF (SOXX) dropped 4.14 percent on the day but is up about 7 percent YTD, outperformed the S&P.  Now the question is what’s next?  Below is an update look at a trade in SOXX.

Our “U.S. Market Trading Map” painted SOXX bars in red (sell) – see area ‘A’ in the chart.  Over the past few weeks, SOXX has been trending lower in a short-term corrective mode after the October rally ran out of steam near the 161.8% Fibonacci extension.  The correction is testing support at the 2020 rising trend line.  The overall technical backdrop deteriorated following recent decline, suggesting that the support might not hold for long.  A close below 388 on a weekly closing basis will confirm this and a test of the more important support just above the 320 zone, of the 127.2% Fibonacci extension and the 1-year moving average.

SOXX has resistance just below 440.  Short-term traders could use that level as the logical level to measure risk against. 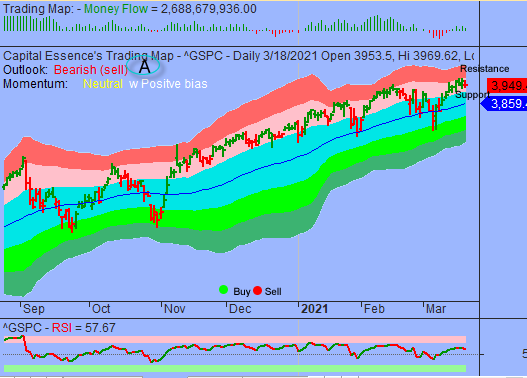 Once again, S&P retreated after recent rally ran out of steam near the lower boundary of the red band. Money Flow measure trended lower from above the zero line and is on a verge of turning negative, indicating a weak net demand for stocks.  Momentum indicator rolled over near the level that has been successfully in repelling price action in the past.  These elements increased the probability for a test of support at the important sentiment 3900 zone.  That level was tested several times in the past weeks. It was significant when the S&P climbed above it in early March. It’s now acting as strong support. We’d turn particular bearish if the index closes twice below that level.

In summary, an overbought pullback consolidation interrupted the multi-month rally in the S&P.  Although seemingly vulnerable to further short-term weakness, the path with least resistance remains higher as long as S&P holds above 3900.  We’d turn particular bearish if the index closes twice below that level.