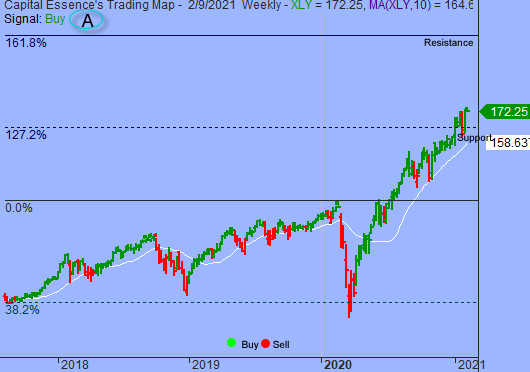 We’ve noted in the previous Market Outlook that: “while overbought conditions might put a cap on the upside the overall technical backdrop remains supportive so downside risk could be limited.  As for strategy, traders should look to increase exposure into short-term market dips rather than chasing breakouts.”  As anticipated, S&P dipped slightly from a record high on Tuesday, fell 0.1 percent to 3,911.23, as the market’s strong rally in February took a pause.  The Dow Jones Industrial Average slipped less than 0.1 percent to 31,375.83. The Nasdaq Composite bucked the downtrend to end 0.1 percent higher at a record close of 14,007.70.  The CBOE Volatility Index (VIX), widely considered the best gauge of fear in the market, rose about 2 percent to 21.63.

Investors could be taking some chips off the table following a strong rally boosted by optimism for a smooth reopening amid the Covid vaccine rollout. Cyclical sectors, which had outperformed in recent weeks, led the declines.  As such, the Consumer Discretionary Select Sector SPDR Fund (XLY) fell 0.55 percent on the day but is up more than 7 percent YTD, outperformed the S&P.  Now the question is what’s next?  Below is an update look at a trade in XLY. 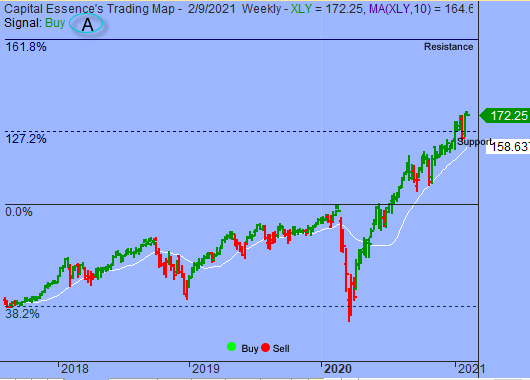 Our “U.S. Market Trading Map” painted XLY bars in green (buy) – see area ‘A’ in the chart.  Over the past few weeks, XLY has been basing sideways near the 127.2% Fibonacci extension as it works off overbought conditions.  The overall technical backdrop remains supportive of further advance.  With this in mind, we’d look to increase exposure into short-term weakness in anticipated of a rally toward the 200 zone, or the 161.8% Fibonacci extension.

XLY has support near 159.  Short-term traders could use that level as the logical level to measure risk against. 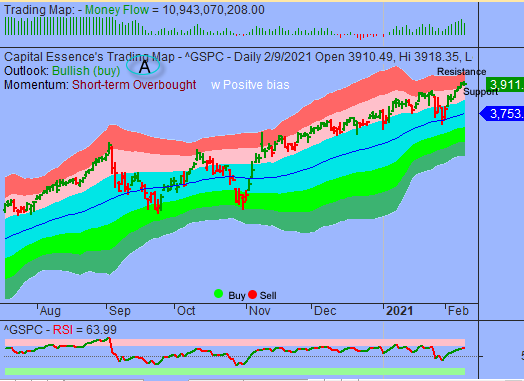 S&P continues basing sideways using the lower boundary of the red band, or extreme overbought zone, as support.  As mentioned, the normal behavior for the S&P has been to consolidate and retreated almost every time it traded above that level so there is a high probability that a significant consolidation pattern will again develop in this area.  While seemingly vulnerable to some short-term setback the overall technical backdrop remains positive so pullback should be short-lived.

In summary, there’s an orderly high-level consolidation period near the lower boundary of the red band, around S&P’s 3900, which represented the digestion period in the aftermath of the late January rally.  Market internal remains bullish but upside momentum does not appeared strong enough to generate widespread breakout. So it should not be surprising to see further backing and fillings in the coming days.